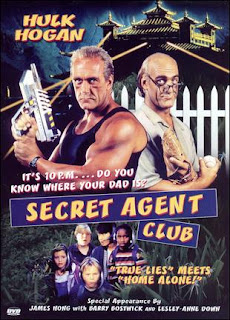 Success breeds imitation. In Hollywood this means that, whenever a big box office hit rakes in the readies, it is swiftly followed by a slew of thinly disguised, cheap and cheerless knock-offs.

So when the Arnold Schwarzenegger spy caper True Lies became a global mega hit, originality-adverse Hollywood producers rushed to cash in, and The Secret Agent Club (1996) was born.

Inferior in execution and ambition, the film steals True Lies’ central premise, re-works it as a kids’ film, and replaces Arnie with Z-grade action star Hulk Hogan – possibly the only man alive who could make the lumbering Austrian look like Sir Laurence Olivier.

Hogan plays Ray Chase, the remarkably unlikely owner of a toy shop, who appears to be living a dull and innocuous life in small-town suburbia. When he isn’t selling water pistols and whoopee cushions, he’s the klutzy and bumbling father to Jeremy (Matthew McCurley) to whom he’s a permanent embarrassment. However, quelle surprise, Hogan’s day job is merely a cover for his secret life as an agent for a shadowy intelligence service called, erm, SHADOW.

Inevitably, Hogan’s private and professional lives become messily entwined when his efforts to retrieve a deadly laser weapon from a campy villainess (Lesley Anne Down) go awry. And when she takes Hogan captive, it falls to the Hulk-ster’s son and his pre-teen friends to rescue him and the weapon.

So, just to summarise: where True Lies offered Jamie-Lee Curtis frolicking in her drawers and being genuinely funny, this film gives you a bunch of highly punchable pre-teen brats. Genius. 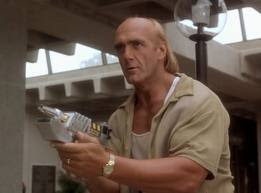 The story limps along like a three-legged dog, the action having as much bite as a toothless chihuahua. In fact, if this film were a dog, most viewers would surely have little compunction about taking it for a long, one-way walk in the woods.

Hogan, in particular, reeks to high heaven. Rarely has so awkward a screen presence ever graced the silver screen (and remember, this is someone whose performance – by definition – is here being measured against that human oak-tree of inexprssion, Schwarzenegger). Slowed by his muscle-bound body and advancing years, he labours through each progressing scene with the grace and subtlety of a collapsing building.

That said, Hulk does bank some credit for being the only unapologetically bald action star. Not for him the designer pates of Bruce Willis or Vin Diesel – whose grade zero shaves almost look cool. No, Hogan frames his folically-challenged scalp with a lustrous, blonde mullet. Sir, we salute you. In many respects, the peroxide mullet gives the best performance of the movie. 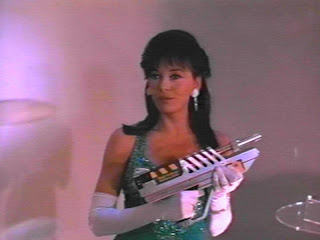 Curiously, for such a flawed film, the supporting cast are surprisingly good. As the chief villain, Lesley-Anne Down eats up her role with pantomime gusto, providing what little entertainment there is to be gleaned.

There are also game performances from Jack Nance as a mad scientist, Barry Bostwick as a double-dealing secret agent, and the ever reliable James Hong. It’s just a pity the flaccid script gives them so little to work with.

The exploding helicopter scene opens with Lesley Anne Down auctioning off the laser to a roomful of terrorists and war-mongering dictators. (No, George Bush and Tony Blair aren’t present, before you ask.)

To demonstrate the weapon’s unique power, Down incinerates an expendable member of her retinue. (I hear he was a trifle slow circulating the canapés at the pre-auction soiree, but I digress). Unimpressed by the casual murder of a mere underling, one of the assembled audience of evil-doers calls for a more substantive demonstration.

Irritated at having the credentials of her wares questioned, Down walks to a nearby balcony and fries the baddie’s helicopter, which is parked in the courtyard outside. “I’ll guess you’ll be walking home now,” she quips.
Artistic merit

In common with much else in the film, this scene is entirely bereft of both artistry and merit. We don’t witness an explosion so much as a white cloud of smoke, which partially clears to reveal some non-descript, easy-on-the-budget wreckage.

Frankly, it was only professional diligence that made this reviewer watch the whole film. And had I realised at this point that there would be no further helicopter action, it’s unlikely the closing credits would have been reached. From woeful beginning to lamentable end, it is utterly uninspired stuff.

I'll have to get back to you on those.

Jeremy’s friends – who band together to rescue Hogan – are the kind of central casting, identikit younglings (the nerd, the girl, the fat one, the cool one) that you’ll be familiar with from a thousand other teen-centric comedies and dramas.

Perhaps it’s just the advancing years, but I invariably find children in films irritating. Unless of course they’re tortured, killed and eaten.

James Hong gets to utter the cod-Chinese proverb: “Even a one-legged man sometimes kicks butt.”

The continuity in this film is risible. The most shockingly example comes at the end of the film when Hogan and his little helpers, attempting to escape from the villain’s lair, are confronted by Down.

All Hogan has to do to escape is blast Down with the laser. But suddenly the action jumps forward, missing out an entire sequence. We then resume the action with Down now holding the weapon, which has somehow been set to self-destruct.

How any of that happened remains a mystery to the viewer. Assuming they care by that point.

Review by: Jafo
Posted by Exploding Helicopter at 16:53