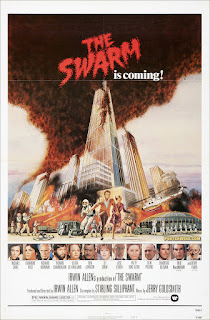 So here we are: not so much a disaster movie, as a disastrous movie.

The Swarm (1978) is a film of such unspeakable awfulness that director Irwin Allen, scarred by the critical and commercial evisceration it received, banned anyone who worked with him from ever mentioning its name again.

Even The Swarm’s star Sir Michael Caine, one of the towering figures of bad cinema (and a man, incidentally, who makes no apology for Jaws 4: The Revenge), considers this the worst film he has ever made.

As the film’s title suggests, the source of terrifying peril are bees. Not your honey-producing, flower-pollinating common or garden variety, but deadly African killer bees.

So, when a swarm of the lethal insects invades the USA, Caine’s top entomologist – or bug expert to the uneducated likes of you and me – is put in charge of saving the day.

Not a premise entirely without promise, you might think – especially with Irwin ‘Master of Disaster’ Allen, the producer of The Poseidon Adventure and The Towering Inferno at the helm. Well, you’d be wrong. Very, very, wrong.

The film barely begins before taking the first of many catastrophic mis-steps. We enter the story with the swarm having overwhelmed a nuclear missile base. The military personnel lie dead and America’s nuclear arsenal sits unguarded and unmanned.

Having seen the cutting edge of Uncle Sam’s weapons technology rendered useless by one blistering attack, the viewer giddily waits to find out how the drama will be escalated.

Will there be a nuclear meltdown? Will the bees head for Washington to continue their assault on the USA’s military infrastructure? Perhaps they’ll take over the White House and transform it into a massive hive from which they can busily – and buzzily – rule the country?

No. Instead, Allen has the bees – and all the action – lurch sideways to a small, white picket-fenced town that, with ill-timed misfortune, just happens to be holding a flower festival.

Rarely has tremulous expectation been scythed so swiftly. One minute we’re worrying about the readiness of the United States’ intercontinental ballistic missiles, the next it’s all about whether the town’s mayor will have to call off the begonia competition.

This non-development is symptomatic of the way the film blindly staggers about under Allen’s scattergun direction. His previous disaster epics had the sense to confine their drama within, respectively, the walls of a burning tower block and an upturned cruise ship.

In this movie, without the natural constraints of a tight location, Allen seems clueless as to whether he should be providing grand spectacle or keeping the danger up close and personal.

Such confusion results in a unholy hodge-podge of scenes, seemingly from entirely different films. The story jack-knifes from large-scale destruction at a nuclear power station and the ensuing deaths of thousands, to picnickers impotently trying to fight off the swarm with a can of fly spray they‘ve puzzlingly packed along with the cheese triangles.

This ever changing kaleidoscope of calamity simply serves to emphasise how none of the action is either a) frightening or b) remotely believable.

The whole thing enters through-the-looking-glass territory when our heroes, not content with having the deadly bees to deal with, start to inflict entirely avoidable disaster upon themselves.

For example, take the scene where Henry Fonda’s saintly old Professor – the only man in the world who can develop an antidote to the bee venom – tests out an experimental cure on himself. And promptly dies. Wasn’t there something a little less irreplaceable – a hamster, maybe – they could have tested it on first?

Or how about when the bungling soldiers, trying to fight off a bee attack, set fire to their own headquarters by using flame-throwers indoors. Like, totally, duh!

The same dunderheaded idiocy again rears its head in the exploding helicopter sequence. This occurs early in the film, before the nature of the threat has been established, when a couple of military helicopters encounter the swarm.

Unsure what to make of the black, buzzing mass in front of them, the hapless pilots naturally decide against trying to ascertain the potential threat from a safe distance. No, instead the gung-ho aviators choose to fly headlong into the swirling unidentified phenomenon.

While this recklessness does indeed allow the pilots to correctly identify their enemy as bees, the manoeuvre predictably causes an unspecified aerodynamic problem for the helicopters. The pilots lose control and the choppers plummet from the sky, crash into the ground and burst into flame.

If you ever wanted to see a Airfix helicopter kit blow up, then this is the film for you’ve been waiting for.

Without any CGI, the filmmakers had to rely on scale models to create their special effects.

So, as the small plastic chopper meets its fiery demise, one should spare a little sympathy for the poor bugger who must have spent painstaking hours intricately gluing together the flimsy model. His handiwork is only briefly seen before the special effects team to blow it all to smithereens.

Sadly, it’s one of the least convincing chopper explosions on record: even the ground and the plant-life looks totally wrong.

Without doubt, the first known apiary-related destruction of a helicopter.

The single positive aspect of The Swarm is that it is so epically bad. Such ripe terribleness has a richness that elevates the film’s copious failings to the level of high art.

The only way to truly appreciate what a Herculean achievement of appalling awfulness this film is to watch it.

That thought that repeatedly nags away at the back of your mind for much of the film, as death and disaster lays waste to whole communities, is this: why didn’t people simply stay indoors and keep their windows closed? Amazingly, despite the presence of so many top scientists and military generals, no-one ever seems to have thought of this.

In a film filled to brimming with lumpen dialogue, my favourite exchange comes right at the end of the film. Caine’s plan to stop the bees involves luring the swarm out to sea where the army intend to blow them up. (Please, don’t ask.)

To do this, Sir Michael fits out a couple of helicopters with megaphones through which he intends to broadcast a special frequency the bees will be helplessly drawn to. Aware of the ridiculousness of such cod-science, the scriptwriters try to make a lame apology and have Caine’s helper say: “Won’t the noise of the helicopter drown out your sound?”

Caine’s reply is majestic: “No, it’s on an entirely different sonic level.”

Real bees were used to film The Swarm. Legend has it that Sir Michael, upon finding small yellow blobs on his clothes during filming assumed it was honey and began eating it, unaware that it was actually bee excrement.

Having inflicted this cack on the world, it’s probably only fitting that he had to eat some too.

Still want more? Then listen to the Exploding Helicopter podcast on The Swarm. Listen on iTunes, Podomatic or YourListen.

Posted by Exploding Helicopter at 11:37

Email ThisBlogThis!Share to TwitterShare to FacebookShare to Pinterest
Labels: Michael Caine, Review by: Jafo, The Swarm