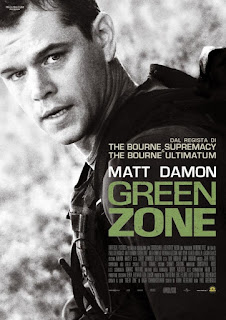 Many men have a man crush on Matt Damon. By many men, I of course mean me. Now that I think about it, it’s not so much a man crush on Matt Damon as it is Jason Bourne. A lone wolf assassin possessed with superhuman abilities, fighting his own demons as well as the entire CIA – but underneath it all, a good man, a man of his word and ripped. Who doesn’t have a crush on Bourne?

But sadly this isn’t a review of Jason Bourne (I’m still to find the niche film review site that will let me write lengthy homages to everyone’s favourite blank faced, amnesiac killer) but it’s not far off though.

Directed by Paul Greengrass, who also helmed The Bourne Ultimatum (the third instalment in the series), Green Zone (2010) features Damon playing a character that has more than a trace of Jason Bourne: Chief Warrant Officer Roy Miller is a tough, relentless and hard man, in a race against time. Nothing will get in his way, not even jerky, handheld camera work.

The plot is an interesting premise and based on a collection of real life events relating to the US invasion of Iraq and the search for weapons of mass destruction (WMD). Roy Miller heads a team tasked to search WMD sites based on CIA and military intelligence. After turning up potless several times, he begins to dig deeper into the source of the intelligence, an Iraqi insider codenamed Magellan. What he uncovers is a deal brokered with a senior Iraqi general who confirmed the absence of WMD and has kept quiet in return for a place in the ‘new Iraq’ after the invasion. Instead, he ends up becoming a patsy for the conspiracy and on the Army’s deck of playing cards as a key figure for kill or capture.

So begins a race to get to him first. It’s a conspiracy within a conspiracy, if you will. Miller wants to find him and expose the knowingly false reasons for the invasion; meanwhile, Jason Isaacs’ special ops commander Major Briggs – in cahoots with a Pentagon puppeteer played by Greg Kinnear- is out to kill him. There’s a suitably weary and battle hardened look about all of them. Isaacs, in particular, appears to come straight off the set of Black Hawk Down, and grown a Village People themed handlebar moustache on the way.
It’s a well shot movie with an intriguing premise. 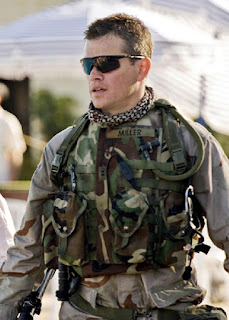 It’s also excellently cast – Yigal Naor who plays General Al-Rawi (Magellan), will be familiar to many for his portrayal of Saddam Hussein in the BBC/HBO House of Saddam mini-series. He is to Middle Eastern army generals what Danny Trejo is to South American street villains.

However, there’s a problem at the heart of it all. The film constantly flits between action blockbuster and a thought provoking, fact based, political thriller. Is it Syriana? Or is it an extension of Bourne? It’s confusing. I recall once seeing the Russell Crowe vehicle Master & Commander described as ‘Maximus Gets A Boat’. Green Zone suffers from the same problem. It smacks of ‘Bourne Goes To Iraq’ or ‘Bourne Hunts WMD’.

Still, Greengrass knows how to explode a helicopter. When Miller finally manages to find Al-Rawi in a hostile part of Baghdad, he’s hotly pursued by Briggs and his special ops team, including a unit in an attack helicopter. Al-Rawi flees and Miller pursues through the streets at night, whilst Briggs and his team close in, all the while watched by the helicopter overhead. With Miller getting close to the general, the ‘copter moves to intercept when Iraqi fighters appear on a rooftop with an RPG….

It scores pretty highly. The RPG catches the helicopter flush on the mid-tail section, sending it cartwheeling across the night skies above a Baghdad suburb. There’s a terrific looking explosion as it clips two rooftops and then disappears out of sight. This wasn’t done on the cheap.

An angry mob of local fighters armed with automatic rifles, converge on the unseen crash site, while Miller watches them from his hiding place. When one group of rebels screech to a halt in a hatchback and run off towards the downed chopper, Miller immediately makes a dash for the car – and takes the opportunity to steal a Peugeot 205. It’s as if all those years on a Moss Side council estate finally paid off for Major Miller. The chase scene in the car is tasty although patently copied from the Bourne films.

None at all. RPG is probably the weapon of choice for rotor kill. And even the average cinema goer will recall similar scenes of an American military helicopter spinning across a dark foreign city. That’s right – Black Hawk Down was an entire film dedicated to this premise.

The sight of Matt Damon, tough marine, pinching a Peugeot 205 and joyriding through Baghdad is really quite entertaining.

A confused mix of genres. It’s clearly a well-researched film based on some incredible real events (see below) but would have benefitted from choosing either more action or more intrigue.

The background real events that inspired the film are worth reading up on. I haven’t read the book that the film was based on (Imperial Life In The Emerald City), but the Magellan character was based on a real CIA insider in Iraq known as Curveball, realn name Rafid Ahmed Alwan.

As a supposed chemical engineer within the Iraqi nuclear program, he claimed to offer details of mobile WMD labs in return for political asylum – this was a key component of the reasons for invasion. His testimony was soon discredited by German, British and American intelligence agencies, and he was shown to be a wholly unreliable source (his friends described him as a “congenital liar” and it was suspected that he was an alcoholic).

Yet despite these concerns, his claims appeared in over 110 US government reports relating to the Iraq war, including Colin Powell’s speech to the UN. Alwan later admitted that he had lied and the CIA acknowledged that he was in fact a con artist with some engineering knowledge but who actually drove a taxi in Iraq. If it wasn’t true, it would be funny.

Posted by Exploding Helicopter at 18:08