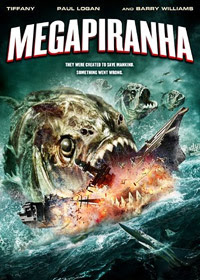 With Jaws, the bearded boy wonder created the ‘blockbuster’, a cinematic carnivore that greedily devoured any movie minnow unfortunate enough to swim in its path.

More than that, Jaws’ success has spawned a veritable ocean full of watery creature-features over the years, including this one.

So, landlubbers, is this a prize catch? Are we going to fall for it hook, line and sinker – or is it just another old boot, fit only for throwing back into the water? Look at that title again, and take a wild guess…

The story begins with the chewed-up remains of an American ambassador and his boat mysteriously washing up on the shore of a Venezuelan river. Suspecting something (ahem) fishy, the US government send their top secret service agent (Paul Logan) to investigate.

But Logan doesn’t really need his deerstalker for this case, which most definitely isn’t a three-pipe problem. Far from it, in fact. Within minutes of flying into the country, he’s greeted by a helpful scientist (improbably played by Eighties pop princess Tiffany) who immediately tells him a shoal of genetically modified ‘mega piranhas’ are to blame.

It turns out the murderous meat-hungry fish are, predictably, the product of an experiment gone horribly wrong. (Do they ever turn out any other way in films like this?) With the mutated fish now the size of double-decker buses and chomping their way through legions of screaming extras, Logan and Professor Tiffany team up to try and prevent everyone from becoming glorified fish-food.

But wait! I hear you cry. Where’s the pointless, confusing and vaguely racist sub-plot involving a dusky military type up to no good, which has for so long been a staple of these films? Fear not, my friends, for here comes Diaz – a shady Venezuelan army colonel who’s up to something dodgy and mysterious in the jungle.

And yup, this boy really knows his mystery onions. Indeed, so secretive are the good colonel’s nefarious activities that, come the closing credits, you’ll most likely be none the wiser than you were at the start. There’s something almost Beckettian about Diaz’s involvement in the film, and the way in which his character sails blithely over such hum-drum concerns as plot and sense. It’s positively post-modern.

But sadly, none of this can stop Mega Piranha (2010) from becoming a poor addition to the pantheon of fishy thrillers? As a denizen of the cinematic deep, it’s a definite bottom-feeder.

Exploding Helicopter is by no means adverse to cheap and predictable thrills, but here there’s a sense that the filmmakers had ‘adequate’ as the very summit of their aspirations. A viewer needs to believe that somebody, somewhere is at least trying, but this is the film-making equivalent of watching someone treading water.

Contributing to this jaundiced feeling, literally, is the weird yellow tint that the whole film is shot in. Presumably meant to add a dusky ‘golden hour’ feel to the cinematography, it merely looks like the cameraman has dunked his lens into an egg yolk, or simply forgotten to adjust the contrast.

Even worse, for an action film, very little actually happens. Amid the conversational longeurs and paucity of thrills, the viewer is left flailing around for positives like a flounder on a line. Fortunately, as you’d expect in a film of this ilk, there’s some extremely questionable science on display, which thankfully provides a few fleeting moments of amusement.

Particularly watchable is the credulity-stretching scene where Logan manages to top up his mobile phone battery by sucking on it, because “the acid in your saliva gives you ten per cent extra charge”.

Granted, most of the fortysomething DVD-viewing audience would probably have preferred to see Tiffany orally giving some ‘extra charge’ to a hard, rounded object, but the ridiculousness is enjoyable nonetheless.

On the subject of helicopters, there are in fact two explosions to report but, like much else in this movie, they are pretty sub-standard fare. In the first scene, Diaz and his henchmen – armed with a couple of choppers – engage in an aerial dogfight with Logan and the good Professor, and the colonel fires a rocket at our heroes.

In the finest tradition of the exploding helicopter genre, Logan makes his helicopter dodge out the way just in the nick of time and the rocket naturally hits the other baddie whirlybird, which has conveniently chosen to circle round right into the missile’s path.

Later in the film, Diaz manages to destroy a helicopter he was actually aiming at, this time a rescue chopper called out by Logan. In both these scenes, admittedly, helicopters do actually explode – but, sad to say, this lacklustre movie never really seems in any real danger of catching fire.

There’s some extremely poor conflagration on display here. Low budget CGI is used throughout and the explosions are nothing more than artificial yellowy smears in the sky.

A third helicopter is destroyed when a giant piranha leaps from the ocean and grabs it between its jaws. Unfortunately, the helicopter doesn’t explode and remains intact as the piranha swims away with it clamped between its lethally sharp teeth.

Logan’s boss, the US Secretary of Defence (Barry Williams), is a joy to watch and perhaps the most trusting person in Congressional history.

When Logan phones to report that, contrary to everyone’s belief that a terrorist or criminal conspiracy was to blame, the ambassador was actually killed by bunch of mutant piranhas, the whole call goes, well, swimmingly.

Now, most people might have been a little nervous ahead of such a call. Would the secretary of defence think you’d completely lost your marbles having spent too much time out in the Venezuelan sun slurping banana daiquiris?

Would he demand copious documentary evidence of your outlandish claim before even countenancing that murderous genetically-modified super fish were responsible for this diplomatic crisis?

No, he basically says ‘Jeez, that sounds awful. Well done for solving the case.’? Just imagine the excuses you could come up with for being late for work with this guy…

One of the few attractions of watching this film was the chance to catch a glimpse of Eighties pop moppet Tiffany, the flame-haired songstress who had a massive worldwide hit in 1987 with ‘I Think We’re Alone Now’ at the tender age of sweet sixteen.

Unfortunately, Tiffany seems here to have arrived on set straight from the school run. At least, that’s the impression given by the seriously frumpy hairdo and frowsy outfit she sports throughout the film. The vibe is definitely ‘I Think We’re At Home Now With Three Demanding Kids’. Well, that’s another teen crush, crushed.

Talking about the piranhas: “Oh we’ll stop them. But you Greenpeacers aren’t going to like it.”

Mega Piranhas was rushed out by its producers ‘The Asylum’ to exploit interest in Piranha- 3D. If your aspirational starting point is the execrable Piranha-3D (a rotten trout of a movie where several former Hollywood stalwarts – Ving Rhames, him from Scream – literally went to die) then there really was never any hope.

Posted by Exploding Helicopter at 17:57