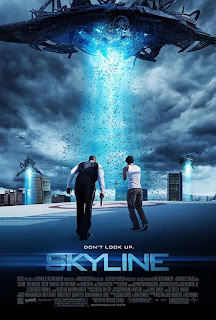 In the 50’s, low budget genre films were all the rage. In the US, to feed the boom in drive-in theatres, studios churned out movies with simple plots, stock themes, and reliable shock effects to satisfy punters more interested in copping a feel than character development. Let’s not mess about - most of these films were crap.

A popular staple of these genre efforts were alien invasions, tapping into the public’s Cold War paranoia and the suspicion that those dirty Commies were lurking somewhere in the laundry basket waiting to take over.

Amongst the B-movie dross a few classics did emerge, Invasion Of The Body Snatchers, It Came From Outer Space and War Of The Worlds remain enduring examples of the genre.

The reason I’m waffling on about these second tier features is because Skyline (2010) is a direct descendent of those exploitation efforts. In fact, Skyline is little more than a pedestrian retread of War Of The Worlds but with added special effects gimmickry.

Unfortunately, for a film which has decided to put the emphasis on providing smorgasbord of special effects, the aliens are poorly designed and look about as convincing as those in Plan 9 From Outer Space.

The end result is neither scary, funny or remotely thought provoking. Indeed, the whole film feels like nothing more than a straight-to-DVD X-files spin-off.

In an effort to cover-up the entertainment vacuum, the directors have piled on the CGI in much the same way a budget fast food joint uses melted plastic cheese to mask the flavour of your three day old donkey burger.

Confronted by this utterly disinteresting sorry affair, I struggled to write even a single page of notes. Fortunately, my torpor was briefly alleviated when an army helicopter hovered into view and with it the impending prospect of a chopper fireball.

So, let’s set the scene. Skyline’s two anonymous protagonists Jarrod (Eric Balfour) and Elaine (Scottie Thompson) are holed up in an up-market apartment complex. But, with the aliens closing in, they try to escape by hailing down a passing chopper from the rooftop.

As it approaches, a large alien climbs up the side of the building and shoots two sticky tentacles from its claws which fix onto the chopper’s chassis. There is a short tug of war until the chopper succeeds in overpowering the alien with a volley of gunfire. Unfortunately, it’s here the problems begin.

As the alien tumbles off the side of the building it drags the chopper - to which it’s still attached - down with it. The doomed whirlybird is pulled into the tower block’s glass and concrete structure and goes up in flame, its rotor blades spinning off and narrowly missing the heads of our protagonists.

The rest of the fiery debris plummets to earth and crashes through a glass foyer.
Artistic merit

The exploding helicopter set piece is competently executed and I liked the way the shell of the helicopter comes straight at the camera from above, adding to the impact.

As a mostly innovation free film it comes as a surprise that the destruction of the helicopter is executed in such an unconventional manner. Until a giant chameleon sticks out its tongue and brings down a helicopter this will remain a unique set-piece.

Rule 1 of the helicopters pilot’s character arc: if you haven’t got any lines and you tangle with a bad guy you will only ever end up as slightly charred worm food.

Apart from the helicopter explosion there is absolutely no need to watch this film.

It’s hard to know where to start as this film misfires on almost every level.

A no-mark cast of actors are understandably unable to make a silk purse out of a sow’s ear. Donald Faison (Turk in Scrubs) pops up as a rapper and is mercifully dispatched half way through the film before he can tarnish his resume any further.

David Zayas (who you might recognise as Latino gang leader in prison drama Oz) plays a strangely aggressive concierge who has some awful lines: sample dialogue, “Vaya con Dios, you son of a bitch”. When the aliens come calling Zayas decides he’d rather take his own life and kills himself in a gas explosion. After watching this turkey you might want to do the same.

Despite being an effects driven movie nothing much interesting seems to happen for the bulk of the film. The dialogue is flat and, as most of the film is shot in the confines of an apartment block great swathes of the film are just plain dull.

A one location shoot is not a barrier to a good film. Phone Booth, 127 Hours and Glengarry Glen Ross prove movies with smart dialogue can use their restrictive environments to ratchet up the tension. The directors could have tried to show a siege mentally or evidence of cabin fever, but this is ignored in favour of more shots of clunky looking aliens floating about outside.

There’s no exploration of wider themes, such as the public’s reaction to an alien invasion, the possibilities of societal anarchy, or even why the aliens are there in the first place. No allegories to commercialism, secularism or politics are discussed let alone contemplated. Perhaps I’m expecting too much.

To top it all off the ending, and here we should issue a *spoiler alert*. is complete and utter baloney. The aliens, it turns out, use human brains as fuel. But, when Jarrod is captured and his brain harvested, he amazingly has the power to control the alien he‘s just been ingested by.

No-one else has this ability. And, this point cannot be made strongly enough: THERE IS ABSOLUTELY NO F*CKING EXPLANATION FOR HIS SPECIAL POWER! It comes apropos of nothing. All the poor viewer can do is throw up their hands and accept this important plot point like the moron the directors clearly expect you to be.

(As the aliens revive themselves after being blasted by a rocket)
Jarrod: “They’re not dead. They’re just really p*ssed off!”

A special mention should go to directors, The Brothers Strause. They have a background in effects work having been involved on the visuals for the Fantastic Four, The Day After Tomorrow and Terminator 3.

They then moved into directing and were responsible for the sh*tfest that was Alien v Predator: Requiem. All in all, tthey have an unenviable record of routinely making bad films.

Out of the $20m this cost to make (chicken feed by today’s mega-budget standards) only 2.5% of the budget went on physical production. The vast majority went on the effects costs.

Despite the thoroughly negative reviews the film made over $78m at the box office and you will probably see a sequel as a result. It goes to show the movie going public are mostly made up of f*cking idiots.

Posted by Exploding Helicopter at 22:03