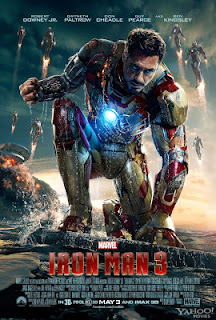 Let's face facts, once they hang up their cape most superheroes are as dull as ditchwater. Clark Kent is a socially inept wet blanket, Bruce Wayne a reclusive misery guts and Peter Parker a dweeby geek. Put it this way, they'd be deadly dull company if you ever invited them out for a few beers.

Tony Stark on the other hand would be a riot. Loaded, charismatic, with more one liners than Tommy Cooper, he'd be the life and soul of the party.

The success of the character is due in no small part to Robert Downey Jr's suave, sardonic portrayal of the millionaire playboy. You don't feel he's acting, so much as portraying a slightly exaggerated version of himself.

Coming after recent po-faced excursions into the comic book universe (we're looking at you Christopher Nolan) Downey's perpetually cocked eyebrow performance made the first film feel like a breath of fresh air.

Sequels though rarely improve on their predecessors and Iron Man 2 is a case in point. Foregoing the knockabout fun of the original, it’s really just a convoluted excuse to set up Stark's appearance in franchise crossover Avengers Assemble.

And it’s from the end of that film that the action in Iron Man 3 (2013) picks up. Having successfully battled an alien invasion alongside his superhero buddies, a shell-shocked, burnt-out Stark is recuperating in his Malibu mansion - which mostly consists of him tinkering with an army of Iron Mans suits and arguing with Gwyneth Paltrow. 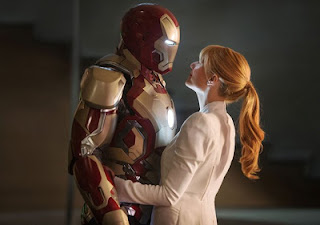 As Stark licks his wounds, a string of terrorist bombings are perpetrated by The Mandarin - a flamboyant Osama-like character played by Ben Kingsley - causing chaos across the US and injuring Stark‘s head of security (Jon Favreau).

Agitated, Stark misguidedly goads the terrorist into taking him on personally and The Mandarin is only too happy to oblige. He sends a trio of heavily laden attack choppers to Stark's hillside hideaway to, let’s say, "redesign" Stark's premises through the medium of air-to-ground missiles.

The lead chopper flies in over the sea and fires off a couple of rockets, blowing a huge hole in the property's art deco frontage. Stark quickly dons his suit and returns fire by launching a huge chunk of masonry at the helicopter. Disappointingly, despite hitting his target, the chopper does not explode and flies out of shot.

A second helicopter swoops in, but this time Stark hits the jackpot. He hurls one of the explosives from his Iron Man suit at the helicopter. Then just as it reaches the chopper Stark uses a blast from one of the jets on his suit to ignite triggering an explosion. The damaged helicopter spins in classic dying whirly-bird fashion. Unfortunately, the stricken chopper crashes straight into the mansion causing the entire building to collapse.

Only a miracle now saves Stark from being crushed in the carnage and the last chopper pilot, thinking his work is done, pootles off for a well-earned pint. 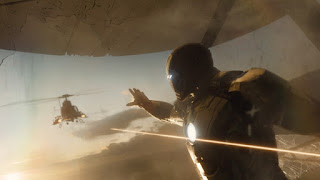 It’s a juicy set piece, nicely shot with plenty of destruction. But the helicopter explosion is delivered with a reddish glow which betrays its CGI origins. Though the sight of the cliff top mansion tumbling into he sea after succumbing to the helicopter wreckage is a nice touch.

Whilst the destruction of the chopper is pretty routine it’s not often you see a helicopter reduce a mansion to rumble.

Unusually the first chopper pilot, despite being hit by a massive slab of concrete, looks like he may have been able to make an emergency landing. The second chopper pilot would have definitely came a cropper though.

As to be expected with a Marvel adaptation, action fans will feel as satisfied as Lindsay Lohan holidaying in Colombia with the Green Bay Packers for company. All the set pieces are executed with aplomb (I particularly enjoyed the skydiving sequence) and there is more shiny CGI than you shake a stick at.

The producers have also managed to corral an ensemble of great acting talent together so Downey isn’t left to prop up the picture on his own. Guy Pearce delivers another convincing performance as evil mastermind Aldrich Killian that continues to make his time as Mike Pearce in Neighbours seems like a cheese induced dream.

Ben Kingsley, as always, is a delight and delivers an unexpected character twist that is usually absent in this genre. Topping it off we get ultimate movie asshole Miguel Ferrer, of Robocop fame, popping up as the crooked Vice President Rodriguez.

Despite the acting chops on display not everything is rosy in the Iron Man universe. Director Shane Black may be responsible for writing the classic Lethal Weapon series, but its wise-cracking buddy formula doesn't work so well here.

Stark befriends a precocious brat (Ty Simkins) whilst investigating the dubious explosions that maybe linked to the accident that befalls his head of security. Their "banter" during these scenes feels forced and not a little ridiculous.

The pacing of the film is also questionable, lurching as it does between knockabout one-liners and gruesome deaths with nary a gap in between. Whilst the original film had its moments of levity rooted in Downey's louche portrayal of Stark, here the comedy is overdone giving the film a schizophrenic character.

Also, the technology in the original movie felt like it was grounded in reality. But here the audience is required to take a greater leap of faith. Stark's new remote control Iron Man suits and Killian's DNA regeneration programme feel like one step too far and possibly a case of jumping the shark.

Overall the film is more enjoyable than Iron Man 2, but fails to capture the magic of the original. I wouldn't go out of your way to see it.

Brandt: “Is that all you've got? A cheap trick and a cheesy one-liner?”
Tony Stark: “Sweetheart, that could be the name of my autobiography.

Shane Black is a bit of a jack of all trades. Not content with being a mere screenwriter or director he has also dipped a toe in the acting world. Keen eyed exploding helicopter fans might recognise him as the bespectacled radio operator Hawkins from the action classic Predator. This bit of trivia is just an excuse for me me to quote the following lame joke:

Hang about till the end of the credits to see Stark on the psychiatrist couch with Dr David Banner. Worth waiting for.