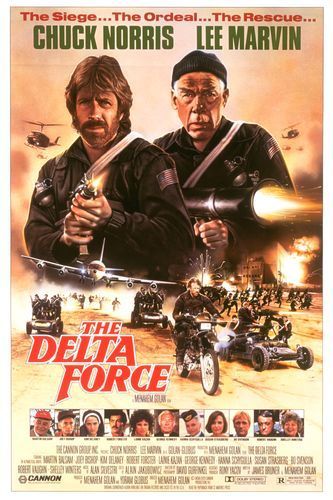 So, when I sat down to watch this movie, I was ready. Ready to be shocked and awed by the military prowess on display. Ready to be wowed by the cold, calculating, precision with which this team of highly-trained special forces would execute their mission.

I certainly wasn’t prepared for a display of military bungling so inept that, had there been a scene where Barbara Windsor’s bra unexpectedly whizzed off as Sid James ha-ha-ha-ed in the background, I’d have happily believed I was watching a particularly flaccid entry in the Carry On series: Carry On Commando, if you like.

But before we embark on an unexpurgated post-mortem, let’s briefly deal with the cookie-cutter plot.

A group of Middle East terrorists from Central Casting (a little known disputed territory near the West Bank) hijack an airplane full of American disaster movie clichés. You know the ones – pregnant lady, nuns, gung-ho jocks, stoic pensioner and an implausibly happy married couple celebrating, with ill-timed misfortune, their silver wedding anniversary. (Perhaps they didn’t have the budget for a plucky dog who you think has died but turns up at the end unscathed.)

So, with the hostages facing death at the hands of the stereotypically swarthy Arabs, it falls to the titular Delta Force led by Chuck Norris (for it is he) to kick rag-head butt and rescue the unfortunate airline passengers.

As we’ve remarked before, our Chuck is one of the most singularly odd-looking men ever to enjoy a Hollywood career. Not least because his trademark beard – an unkempt thicket of wiry, straggly hair – makes him look he has a pubic wig attached to his chin.

And given this movie was made in the Eighties, Norris’ own physical oddity is naturally accentuated by some truly horrific wardrobe choices. Having previously rocked an ill-advised ‘double denim’ outfit in VHS classic Invasion USA, Norris here throws any last vestiges of restraint to the winds and boldly goes where no style icon or fashionista has gone before: triple denim.

Yes, TRIPLE denim. In one remarkable scene we get to witness Charles in denim jeans, denim shirt AND a denim jacket. Had Chuck at this precise moment dropped his trousers, I’ve no doubt we’d have found him resplendent in a pair of stonewashed denim budgie-smugglers.

Sadly for any stylists in the viewing audience, Norris soon switches into combat fatigues (regrettably non-denim) to get on with the urgent business of rescuing the hostages. And it’s at this point that the Delta Force’s elite military expertise is revealed to be nothing more than a thin veneer hiding a distinctly shabby amateurism.

This is strikingly demonstrated during Chuck’s first attempt to free the hostages. Neglecting to check how many terrorists they’re up against the raid ends in an unmitigated fiasco. In reprisal, the terrorists unceremoniously shoot one of the hostages in the head. Well, at least now we know they’ve got guns too.

Still, this is minor bungling when compared to Chuck’s big rescue plan after the hostages are moved from the jumbo jet to a fortified compound. To ensure the enemy will be taken completely by surprise, he plots a clandestine raid to be carried out in the dead of night.

Unfortunately, this sneak attack involves staging the biggest beach landing since D-Day. Trucks, jeeps and motorbikes clank noisily ashore, before rattling with an awful din through the streets of the Lebanon. Short of hiring Fatboy Slim to do a set of ‘bangin’ tunes’ from the back of one of the trucks (‘Make some noise, Beirut!’), it’s hard to see how they could have been less discreet.

But, I hear you cry, what about the exploding helicopter scene? Well, my chopper conflagration-fancying friends, I have shocking news to impart: it is, incredibly, the very first event in the film.

It’s true. Delta Force opens with a shot of a stationary helicopter in an empty barren desert. For a few seconds, nothing happens. Then the helicopter suddenly explodes. No exposition, no explanation, no introduction. One minute it’s there, the next it’s been blown to smithereens.

It’s a hell of a way to start a film. And as an attention grabbing statement of intent for a film, it’s as ballsy as any red-blooded exploding helicopter fan could wish for…

…but, having said that, I’ve mixed feelings about this helicopter explosion. On one level it’s the single greatest opening to a film I’ve ever seen. The chopper fireball is the very first thing to happen and I wouldn’t be running this website if the idea of helicopters exploding immediately at the start of a film didn’t thrill me in ways which would probably disturb you if I elaborated on them.

But on another level, it’s an unsatisfying experience. Like many of my own first teenage forays with girls, it’s all climax and no foreplay. And it’s so very brief. (Yes, the teen analogy till applies.) Ultimately the whole scene doesn’t really work.

At just five seconds into the film, Delta Force holds the record for the earliest exploding helicopter.

Yes. Norris heroically runs back to the exploding helicopter to save a soldier who’s trapped onboard. There’s a conspicuous absence of camaraderie from the rest of the Delta Force troops though, who seem completely content to let their colleague burn to death. Maybe they just didn’t like him very much.

In recent years any thriller with a Middle Eastern setting has seemed duty bound to have a hideously baffling plot as anyone who’s struggled through Syriana and Green Zone can attest.

Delta Force aspires to nothing more than uncomplicated, patriotic tub-thumping fun best evidenced by the jingoistic ending which sees all the now rescued hostages singing the star spangled banner while drinking Budweisers. Not wanting to be left out I started chanting “U-S-A, U-S-A” at the screen.

Clueless as they are, Delta Force by no means hold a monopoly on ineptness in this film. No, credit where it’s due – the terrorists also display a finely-curdled crapness as they prepare to hijack the plane.

Hilariously, one of the criminal hijacking masterminds turns out to only have a standby ticket. Since the flight’s full, he’s not allowed to board and is left stranded in the airport terminal. Don’t worry lads, I’ll hijack the next one.

One plucky hostage manages to find the brighter side of being caught up in a hijacking: “Whatever happens, we’ll always remember our silver wedding anniversary.”

While they were at the start of their careers, Delta Force proved to be the end of Lee Marvin’s. Possessed of a lean, gaunt look in his heyday, here Marvin exudes all the health of an animated corpse. Which isn’t far from the truth, as the great man died shortly after making this film.

Still want more? Then listen to the Exploding Helicopter podcast episode on The Delta Force. Listen via iTunes, Podomatic, Stitcher, Acast and YourListen. Or even right here.

Posted by Exploding Helicopter at 17:24