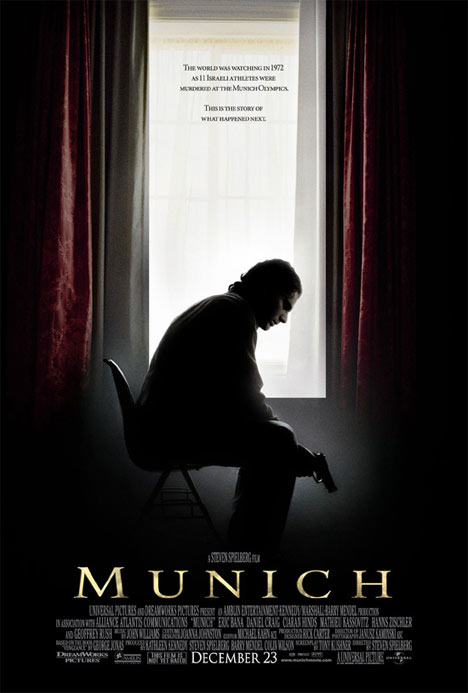 Munich (2005) can be summarised in just two words: everyone dies.

Steven Spielberg’s film tells the story of how Israel took revenge for the murder of its athletes at the 1972 Olympics. And bodies start piling up from the start.

We open with a graphic replay of the Munich massacre, as both hostages and terrorists are bloodily killed during the siege and a bungled police ambush.

Thereafter, the death toll rises inexorably. The Palestinians who masterminded the attack are hunted down and killed by a team of Israeli hitmen (led by Eric Bana), who are then in turn slowly killed off by the Palestinians in retaliation. Any resemblance in this endless cycle of violence to the ongoing Middle East situation is of course coincidental.

Suffice to say, by the end of the film, pretty much every character has either been shot, stabbed or blown up. (And sometimes, more than one of those things.) Still, it does save the trouble of having to remember everyone’s name.

For such a daunting mission, you might imagine Mossad would select a group of conscience-free, stone cold killers. After all, what’s needed here is a band of reptilian-blooded assassins who can maintain a laser-like focus on their job.

This, though, is a Steven Spielberg film. So, rather than a glamorised exercise in revenge-porn what we actually get is an earnest study in the morality of vengeance. Unfortunately, this requires Bana’s hit squad to be made up of quibbling aesthetes who quarrel endlessly about the ethics of their mission.

And boy, can they argue. There’s barely a scene without a bout of tetchy bickering as they tie each other up in existential knots, even while they’re supposed to be booby-trapping the hotel room of their next victim. In parts, it’s more Hollyoaks than Holy War.

As our dysfunctional team of stroppy assassins grimly continue their squabbling, I began to wonder what this mission might have looked like had it been given to Larry David, Woody Allen and Dustin Hoffman. Sure, there’d have been the same quotient of arguments and neurotic self-doubt, but at least there’d have been a few laughs.

All this intellectual self-flagellation makes Munich seem like a bizarre edition of The Moral Maze, only one where the panel punctuate their philosophical musings with an occasional car bombing.

Miraculously, despite the maelstrom of death around him, Eric Bana makes it through to the end of the film. That’s no mean feat for an actor who’s made a career out of playing characters who meet with a sticky end (Star Trek, Troy, The Time Traveller’s Wife, Hanna, et al).

Ultimately, this is good news both for Bana and for exploding helicopter fans, since he plays a pivotal role in one of the most bizarre chopper fireball scenes ever committed to celluloid.

After completing his mission, Bana returns home to the loving embrace of his wife but is haunted by his murderous actions. This being the Seventies – an age before psychotherapy and counselling – our Eric attempts to exorcise his demons in time-honoured male fashion by having some rumpy-pumpy with his wife.

While engaged in conjugal congress, a grim-faced Bana has a flashback to the bloody massacre at the airport during the 1972 Olympics. We see the hostages and the terrorists aboard a helicopter they’ve been given to fly out of the city. Unfortunately, the inept German police force choose this moment to start shooting at the terrorists, causing a gun battle to break out.

As the sequence develops, the action cuts between Bana’s increasingly sweaty thrashings and the unfolding disaster at the airport. Literally, it’s non-stop chopper action. As Bana pulls his best Eric-Clapton-playing-a-guitar-solo sexy face, the camera cuts to one of the terrorists pulling a pin from a grenade and rolling it underneath the chopper.

At this point, the scene reaches its (ahem) climax. As an impressively gurning Bana glories in his moment of orgasmic ecstasy, doubtless so do legions of exploding helicopter fans, writhing on their single men’s bedsit sofas as the aforementioned grenade blows up and destroys the chopper.

Spent, both Bana - and indeed chopper fireball fans - slump back in post-coital bliss.

A giddy cocktail of sex, death and exploding helicopter - this is possibly the finest moment in Spielberg’s much lauded career as a director.

Totally unique. This is the first, and indeed only, time a helicopter explosion has been combined with a sex scene. More please.

In a film that’s a near three-hour murder-fest some light relief is provided by the cast who serve up an indigestible dog’s breakfast of accents.

The primary offenders are a curiously bewigged Daniel Craig, who jack-knifes violently between Afrikans and a dulcet northern brogue, and Eric Bana whose efforts at a Germanic lilt sound like he’s modelled it on Gruber, the camp as knickers Nazi from Allo Allo.

Surrounded by such linguistic butchery, Geoffrey Rush obviously concludes that the safest course is not to be pinned down by anything identifiable, and instead opts for an accent that can only be described as ‘foreign’.

Revenge may be a dish best served cold, but unfortunately in Munich it makes for a chilly and remote film. While the filmmaking is stately and elegant, it is ultimately a cold, hollow exercise which fails to deliver either an emotional or intellectual punch.

The fact Munich doesn’t quite work may in part be a result of its hectic production schedule. Filming and editing took place simultaneously in order to get the film out in time for Oscar consideration. Perhaps fittingly, given the subject matter, it bombed.

Listen to the Exploding Helicopter podcast episode on Munich on iTunes, Stitcher, Podomatic or YourListen. Or listen here and now on the embedded player.

Posted by Exploding Helicopter at 08:26