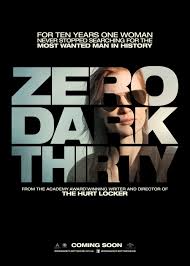 After a 12-year manhunt – which involved a pain-staking sift through thousands of leads, countless hours of interrogation and no small amount of brutal torture – it turns out the mastermind of the 9/11 attacks was the old beardy guy living quietly in a small house who no-one suspected.

If, like me, you’ve grown up watching Scooby Doo, you’d have known this was precisely the culprit and spent the entire film pointing at the screen shouting, “Him! It’s him!”

In fact, this is just one of many uncanny parallels Zero Dark Thirty (2013) has with the children’s TV cartoon. As the film’s hero, ball-busting CIA agent Maya (Jessica Chastain) combines the willowy, flame-haired looks of Daphne with the intimidating intelligence of the chunky knitwear-loving Velma.

The ‘mystery van’ in this instance turns out to be a jeep, which eventually leads the CIA to Bin Laden’s hideout, the sort of scary darkened house that Scooby and the gang timidly skulked around on a regular basis. Indeed, such is the overwhelming sense of déjà vu, that when the soldiers finally confront Osama I fully expected him to lament how he’d have gotten away with it were it not for those pesky Special Forces death squads.

Still, for all that, there are some notable differences. Unless I’m mistaken, Fred, Shaggy and the rest of the gang never actually resorted to torture to solve the mystery. (Of course, I here exclude any episodes featuring Scrappy Doo, each one of which represented a particularly base form of psychological torment. Had the US military only had the sense to play Scrappy episodes on a loop at Guantanamo, they’d have had the whole thing wrapped up in a fortnight.)

On the film’s release, there was much media discussion about the film’s depiction of what is euphemistically known in the intelligence world as ‘enhanced interrogation’. Famously, the movies trumpets a proud ‘Torture works!’ message, whereas the guy the fictional torture victim is based on in fact told them nothing more useful than: ‘This is very painful. Please stop stamping on my testicles and pretend-drowning me.’

Equally unconvincing is the black wig that Maya uses to disguise her flame-haired tresses and sneak inside a CIA ‘black site’. For a moment, I thought Morticia Addams had joined the war effort.

In fact, Kathryn Bigelow seems to have a special affinity for dodgy weaves in general. At the Agency’s own Langley headquarters, senior spooks Mark Strong and James Gandolfini both seem happy to sport the most unconvincing hairpieces seen in public since Sean Connery donned a steel brillo pad in The Hunt For Red October.

But of course, all this casual water-boarding and tonsorial tomfoolery would be as nothing if it weren’t for our primary interest – the helicopter explosion. For that we have to go back to the raid on Bin Laden’s compound.

The Navy Seal team are sent in to terminate Bin Laden with some good old fashioned extreme prejudice. As the mission involves surreptitiously sneaking into Pakistan they’re given a couple of prototype ‘stealth’ helicopters which officially don’t exist (but demonstrably do given their use here).

As they’re about to start the raid, one of the helicopters develops an unspecified technical fault and crash lands. However, the soldiers are not to be diverted from their task and the attack continues as planned.

After killing ‘the Big O’ the special ops team now have to make a speedy escape. But before making their evacuation, they need to cover their tracks and plant explosives on the wrecked aircraft – presumably to stop its secret technology falling into foreign hands (although given the chopper’s lamentable safety record it‘s hard to think they‘d want it).

However, further quibbling about aviation safety is abruptly ended when the explosives are detonated and the helicopter is consumed in lovely yellow flame.

You don’t win an Oscar without knowing how to blow up a helicopter, and director Kathryn Bigelow ensures a suitably fitting conflagration for the downed chopper. 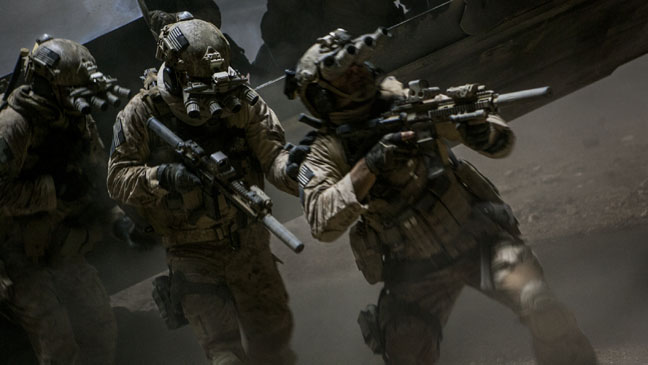 Yes, the crew of the helicopter survive the crash landing and escape in the other chopper.

I have to give some credit to Mark Boal for writing a script that is, at times, an impenetrable litany of acronyms, short-hand, and military slang.

A regularly gripe of mine is the great mouthfuls of lumpen exposition that screenwriters feel compelled to put into the mouths of characters simply because they don’t believe the audience has the intelligence to follow the story.

It was thus refreshing to see Zero Dark Thirty making no such concessions to the viewer. It simply trusts you to either understand what’s happening or work out the answer for yourself.

The film is easier to admire than love. With an aspiration to document the hunt for Bin Laden rather than moralise, and with Jessica Chastain’s character an impenetrable void at the centre of the film, there’s actually very little to enjoy. There’s equally little to learn if you bother read the news.

As is well known, the film was originally conceived before Bin Laden was discovered and killed and had to be hastily rewritten. I can’t help but wonder how the politics of the film would have been interpreted had Bin Laden never been found and the film made as it was first conceived. I can’t help but suspect it would have given the depicted events an existential power. Instead, they’re just grinding towards the inevitable conclusion.

Despite the combined efforts of the CIA’s brightest minds, the latest in high-tech spy satellites, and cutting edge communication intercepts, I loved how the manhunt ultimately boiled down to a Delta Force soldier creeping around the spooky compound whispering, “Osama..? Osama..?”

I can only assume it was his years of elite military training which stopped him from adding: “…come out, come out, wherever you are.”

Apparently James Cameron was at one time mentioned as a possible director for the film, but instead chose to make two sequels to Avatar. Well, he probably needs a few extra quid.

Review by: Jafo
Posted by Exploding Helicopter at 18:15