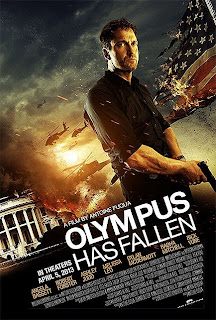 Rarely has an action movie seemed so lazy. No doubt pitched as ‘Die Hard in the White House’, this generic piece of floss also plunders plot lines, characters and whole scenes from a dozen other movies. It’s the cinematic equivalent of a hoary tribute band, ruining old classics and expecting applause for it.

Adding to its woes, the star is Gerard Butler – a kind of Scottish Steven Seagal, only with less emotional range.

The movie’s high standards of verisimilitude are established at the outset when a bunch of North Koreans manage to fly a lumbering military plane right to the centre of Washington, largely unchallenged.

As the plane blasts DC to smithereens, a crack team of 40 enemy agents, disguised as tourists, quickly overwhelms the famously not-well-guarded White House and takes the President hostage in his own underground bunker.

Luckily, disgraced Secret Service agent Butler also manages to blast his way in, kicking off what will become a truly prodigious body count. Once inside, he establishes phone contact with acting President Morgan Freeman (I know, I was surprised too) and the inevitable conference room full of worried politicos and grizzled generals.

Will our Gezza be able to single-handedly despatch all the nasty Norks, save the President and stop the USA’s nukes going off with seconds to spare? Obviously, Exploding Helicopter wouldn’t dream of spoiling things so you’ll just have to go see for yourself. (But yes.)

Hokum it may be, but there’s some entertainment to be gleaned from playing ‘Spot the Steal’. Look! There’s that close quarters choke-fight-in-a-tiny space from Air Force One. Hey! Aren’t those the hooded hostages in identical overalls from Inside Man?

More impressively, entire scenes – the snatched phone call to the missus, unknowingly befriending the baddie, jumping off an exploding building – are lifted wholesale from Die Hard without the merest attempt to put a fresh gloss on them.

This is a very particular type of action thriller. Where Bruce Willis brought quips, Van Damme the corny kung fu and Arnie a bovine semi-comedy, Butler unapologetically specialises in uber-violence. Within minutes of entering the White House, he’s bludgeoned one baddie and tortured another two to death. Knives going into necks – and actual heads – quickly becomes a common feature, almost a calling card.

Unsurprisingly, there’s nary a giggle to be had. Butler, realising every three seconds spent crafting a witty aside is a lost opportunity to stick a skillet knife into a Nork’s right temple, largely lets his bladed instruments do the talking. It’s pretty artless stuff.

Still, there is a solid, if predictable, supporting cast. Aaron Eckhart (who seemingly stole Dennis Quaid’s career overnight) is suitably lantern-jawed and stoic as the kidnapped President. Robert Forster turns in a heroically hammy turn as the gun-happy General who, in time-honoured fashion, bungles a military rescue and has to be given a public dressing down.

The magisterial Morgan, meanwhile – who exclusively seems to play either the President or God these days – churns out his lines with a pained look that suggests the actor beside him has just dropped one. But we all know that what really stinks is the script.

Like many modern action films, Olympus suffers badly for want of a half-decent villain. The muscle-bound Kang (Rick Yune) is a bland presence, largely reduced to explaining plot points. In the absence of a personality, his calling card also (oh, happy coincidence!) turns out to be uber-violence. His stand-out scene revolves around him repeatedly kicking a 60-year-old woman [the Secretary of Defence] in the stomach. Alan Rickman, this is not.

Equally dull is Dylan McDermot, playing the good agent gone rogue who, when asked why he’s turned sour, yelps: “Wall Street! Globalisation!’ Really? The existence of a financial sector and the steady growth in international trade agreements is what finally tipped him over the edge? Deep stuff, indeed.

The fact that McDermot, with his moany, equine features, looks more like Ross from Friends with each passing day only makes him all the more slappable. Against all the odds, our Gezza ends up stabbing him in the throat.

But, to the helicopters. General Bob Forster, his voice so gravelly it’s being picked up on nearby submarine sonar equipment, orders six military choppers to land on the White house roof. But Kang, taking a brief respite from pummelling pensioners in the lower abdomen, has worked out how to use the White House’s own ‘Hydra Six’ defence system – essentially a huge automated machine gun.

By the time Butler stabs his way to the rooftop, the Hydra gun has already biffed five choppers. Our Gezza heroically blasts the Hydra with a rocket launcher, but the final helicopter smashes into the White House right where he’s standing. As the flaming vehicle explodes, our anti-hero leaps off the flaming ledge (Die Hard), falls through a few storeys of the collapsing building (Die Hard 5), then is trapped on his back as the rotor blades come swishing down and stop just before his meaty features (Mission Impossible). So: not at all derivative, then.

Very weak. The whole scene plays out at night, the editing is Michael-Bay-on-acid fast, the CGI is hazy and, frankly, it’s not at all clear what’s happening for most of the time. Note to Hollywood: this scene probably cost hundreds of thousands to put together, and yet was met with a palpable sigh by the cinema audience.

You’re joking aren’t you? This is a film that has been constructed exclusively from the scenes of other films.

There’s a second helicopter explosion to enjoy when the terrorists try to make their getaway from the White House. Seemingly all set to fly to safety aboard a chopper that’s been provided for them, the whirlybird mysteriously blows up. Turns out the whole scene has been deliberately staged to cause enough confusion for the terrorists to make their real getaway.

Ah, Gerard. What will movie historians say of his schizophrenic movie career? No other actor in Hollywood has so effortlessly straddled the contrasting genres of rom-com and gut-wrenchingly violent thriller, while seemingly being equipped for neither. His ripe awfulness, almost McConaughey-esque in places, makes for compulsive viewing.

You’re never sure whether he’s going to be breaking limbs or mending hearts. In Law Abiding Citizen, for example, he (inevitably) stabs someone in the neck then continues a steak dinner as blood pumps fitfully out of the corpse beside him. But that film came only shortly after P.S. I Love You, where he lolled like a puppy and boyishly charmed Hilary’s Wank (sic) with a crashingly bad Oirish accent. At this juncture, it’s still not clear which of the two was the more distressing.

Best of all is The Ugly Truth, a magnificently mis-judged rom-com in which Butler plays a lothario shock-jock, but with some of the latent nastiness intact. Poor Katherine Heigel never looks sure whether he’s going to kiss her cheek or snap her tibia with a single, well-aimed kick.

In the initial attack, the plane bombs Washington in a taboo-busting fashion that is plainly meant to evoke 9/11. (The collapsing Washington Monument, for example, falls exactly like the Trade Center buildings). There’s something genuinely distasteful about a middling piece of cinematic whimsy using America’s largest modern tragedy to try and grasp at ‘edginess’. 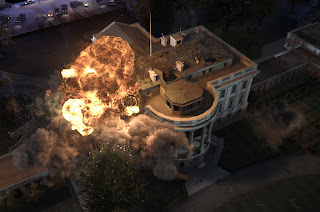 Also, there’s a bizarre (and mercifully brief) ‘Home Alone’ sub-plot, involving the President’s cute kid being trapped in the White House. Presumably, even the makers of this film realised how creepy it was – if not downright weird – to have Butler offering avuncular advice to the young boy, before filleting a screaming Nork in front of him. The child is quickly allowed to escape via a drain, to everyone’s relief.

“They’ve opened the gates of hell…”
Morgan Freeman has presumably just seen the script for Olympus Has Fallen 2.

In Hollywood, no idea is so bad that it can’t be done twice in quick succession. Expect to see White House Down (essentially the same movie but starring younger, less Scottish beefcake Channing Tatum) at a cinema near you very soon.

Review by: Chopper
Posted by Exploding Helicopter at 17:52