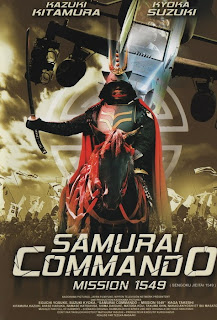 Time travel, a sophisticated modern day army, and the warring Samurai hordes of 16th century Japan. With these golden ingredients, Samurai Commando Mission 1549 (2005) doesn’t have any difficulty keeping your attention.

What's more, the film wastes no time in getting to the action immediately and we’re straight into the thick of things before the titles even appear.

We start with a helicopter flying in to join up with a small military force of tanks and soldiers that are engaged in a mysterious experiment. Something goes awry, and the troops are enveloped in a shimmering cloud and disappear from the 21st century.

After re-materialising in some lovely unspoilt greenery, a couple of unsuspecting soldiers decide to get a bit of fresh air top-side from their tanks. They’ve barely had a moment to get a lungful of air before their chests are pierced with arrows. Roll credits.

Back in the present day, the authorities work out what went wrong with their experiment. They were attempting to create a solar radiation shield to prevent it interfering with the electronics on all their high-tech weaponry. Basically, factor 50 sun block for military vehicles. Unfortunately, the experiment was only a partial success. True the force were shielded from the harmful effects of the Sun, but only by being sent over 500 years into the past.

Anyway, the army decide it might be quite a good idea to go and retrieve the soldiers and their well-respected Colonel, Matoba, from the 16th century. And with good reason - present day Japan is slowly disappearing, they presume due to the ‘butterfly effect’ of the Colonel‘s sudden presence in the past.

To do this, they enlist the help of a samurai warrior who’s been accidentally brought forward in time (Shichibei), and a reluctant former soldier (Kashima), who is enjoying a moderately successful career running a restaurant. By happy coincidence Kashima happens to know the Colonel, and is the only person to have ever bested his military tactics. I wonder if that might become useful... Under strict orders to rescue the Colonel’s troops, the experiment is recreated and the rescue force is sent back in time. On arrival they use a helicopter to scout out the area and it quickly becomes the first of two chopper fireballs to grace the 16th century skies.

Spotting the rogue Colonel’s castle base, the helicopter flies in for a closer look. Unfortunately, the vintage castle’s defences been given a 21st century upgrade in the shape of surface-to-air missiles. The chopper evades the first but the second hits it sweetly, instantly engulfing the chopper in fire. The rest of the would-be rescuers are quickly captured by the combined forces of the Colonel's soldiers and the army of samurai warriors he‘s enlisted.

After so much breathless action it’s time for some exposition, so Colonel Matoba provides a handy précis for confused viewers. Having unexpectedly arrived in 1549 Matoba had briefly considered the ‘butterfly effect’. But like a jittery lepidopterophobic trapped in a butterfly farm, he decided to hell with that and deployed his army's full array of weaponry to swat the hordes of samurai surrounding his men.

Naturally, this taste of power was enough to send Matoba into full megalomaniac Bond villain mode. He‘s now plotting to use a nuclear device to erupt Mt Fuji, wiping out Japan so that he can rebuild it from scratch using his advanced technology. And, of course, telling everyone about how he can't be stopped.

The rescue mission is now a race against time so, with the fate of Japan hanging in the balance, our heroes escape from the castle to set up a final confrontation. Happily, this includes another chopper fireball. 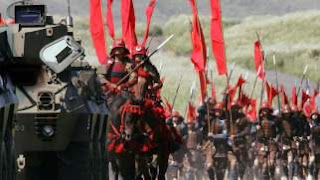 Each force has one cobra chopper remaining. And if the first was a bit understated, the second is more of a CGI treat. With his castle under siege, Matoba's chopper reappears into the action. But Kashima's lot are well-prepared and use their own missile to shoot the chopper down as it approaches.

The helicopter lurches out-of-control and collides with an oil refinery that Matoba built at his base. This triggers a cascade of explosions which signal that the end of the film is has arrived.

Despite a highly dubious plot, the film just about hangs together and is mercifully under 90 minutes.

The first explosion, zero. The second though sees the explosion engulf the anachronistic Japanese military base, with catastrophic effects.

Two out of a possible three is an impressive strike rate.

It's unusual to see one exploding helicopter in the 16th century, let alone two.

It certainly isn't slow paced. Prior to this film, director Masaaki Tezuka had mainly been involved on Godzilla films, and he wastes no time getting into the action. The film also looks the part and Takeshi Shimizu was named Best Art Director at the 2005 Asia-Pacific Film Festival. The big scene in which "The Castle" is comprehensively obliterated is a highlight - a case of no winners this week on Takeshi's Castle.

It seemed a quite obvious error that the rescue team sent back didn't significantly outnumber the party that had 'gone rogue'. What sort of thinking suggested that one helicopter would be fine against two? No wonder Colonel Matoba wanted to create a new future if this was the quality of strategic thinking from the Japanese military's best and brightest.

"Over-confidence leads Japan into WW2 only to suffer a cruel defeat...I will change all that. I will build a nation that 21st century citizens can be truly proud of. I do not intend on dying for a people who have long forgotten how to defend themselves!"

The film was based on a 1979 Japanese film, GI Samurai, and also resulted in a 4-episode mini series with a similar storyline.

In 2013, we are apparently approaching a solar maximum. No word on whether the UK military is going to send the SAS back to compete in the War of the Roses.

Review by: Joseph Clift
Posted by Exploding Helicopter at 14:41