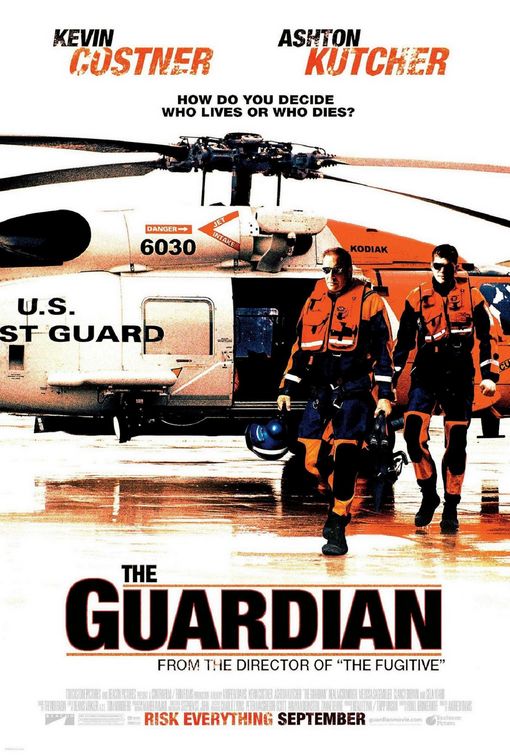 With the Oscar-laden Dances With Wolves, Kevin Costner made a big splash in the Hollywood pond. Then over the next few years he surfed a tidal wave of critical and commercial success, until nearly sinking his career (and an whole studio) with watery disaster epic Waterworld.

With that film’s title now a cautionary byword for excess and folly – a kind of Heaven’s Gate, with gills – you’d have thought Tinseltown producers would be wary of bankrolling any project that placed Kevin anywhere near so much as a bucket of water, never mind an entire ocean of the stuff.

But, proving the wisdom of William Goldman’s warning that Hollywood is a town where ‘nobody knows anything’, incredibly someone decided to chuck $70m at The Guardian (2006), a tale of heroism on the high seas.

Big Kev plays Randall, a legendary rescue swimmer with the US coastguard. Haunted by the death of his friend during a dangerous rescue (a staple of these movies – see Sly Stallone in Cliffhanger’s opening scene), he’s forced to take a gig at the coastguard training school whilst he regains his sea-rescuing mojo.

At the school, Kevin has to whip a class of new recruits into shape – including cocky high-school swim champ Ashton Kutcher, who is similarly hamstrung by personal tragedy. Can both men let go of the grief that’s holding them back? Can they achieve their coastguard dreams? Does a bear answer the call of nature in the woods?

The answer, of course, is ‘yes‘. However, we must first sit through an extended hard-training montage and an equally punishing (for the viewer, at least) cathartic scene where Costner and Kutch, lips a-trembling, share their hokum stories of inner pain. There won’t be a dry eye in the house after this scene: certainly, I nearly drowned crying with laughter.

As he recently demonstrated in Man Of Steel, Costner was born to play these humble mentor roles. With his slow hokey drawl, folksy wisdom and solid Joe persona, he’s in many ways the natural heir to James Stewart – even if here he isn’t required to do anything more demanding, in acting terms, than tread water.

Kutcher though, as the arrogant ingenue, is plainly not waving, but drowning. While he might have been comfortable playing second fiddle to an older, more established actor in his marriage, it’s a role he visibly struggles with onscreen.

Still, despite the achingly predictable plot arc and familiar array of cardboard cut-out characters, the two big sea rescues that bookend the film are excitingly staged by veteran director Andrew Davis (Under Siege, The Fugitive). And, while the almost two and a half hours run-time is over generous, this is a slickly made and harmlessly enjoyable piece of work.

The sure directorial touch is evident in The Guardian’s opening action set-piece, where you don’t need the weather eye of an old sea captain to forecast there’s an explosion brewing for the featured helicopter.

Amid a massive storm, the Kev’ster is flown out to help the crew of a cargo ship which has started to sink. Kevin dives into the sea to help the sailors who’ve abandoned ship. Just before they can be winched to safety in the helicopter, a huge wave flings a piece of wreckage from the stricken ship into its tail rotor.

Out of control, the chopper spins around before crashing into the sea and exploding. In a macabre final twist, the sinking helicopter wreckage pulls the man who was about to be winched to safety beneath the waves and towards a watery grave.

As the centrepiece of the film’s big opening sequence, the helicopter explosion is effectively and dramatically staged. As the fatally damaged helicopter spins towards its doom we see the panic and chaos within the helicopter, as the alarms sound and the pilots battle with the controls.

While one of water’s more notable properties is an ability to extinguish flames, this is conveniently ignored and the chopper explodes like a kerosene soaked tinderbox upon impact with the sea.

There’s nothing particularly innovative here. Helicopters have met watery demises in other, earlier, films such as The Life Aquatic With Steve Zissou and Piranha 2.

Costner, obviously, survives. As does Kev’s buddy, but only so that he can then die a short while later in Costner’s arms and provide him with the hefty emotional baggage he carries throughout the rest of the film.

If you’ve seen Waterworld, you’ll be relieved to know there are no scenes involving Costner drinking his own wee in this film.

During the training school sequences, it feels as if someone has switched channels to a promotional film for the coastguard.

I can’t help suspecting there was an awful lot of co-operation with the actual US Coastguard in the making of this film, and the price of all that access to locations and equipment was a slavishly drooling portrayal of the service.

Throughout the film, Costner dispenses little epithets of sage advice. One though, rather misses the mark and shows that the coastguard’s gain is counter-terrorism’s loss: “Sometimes you got to shoot a hostage.”

Review by: Jafo
Posted by Exploding Helicopter at 11:19