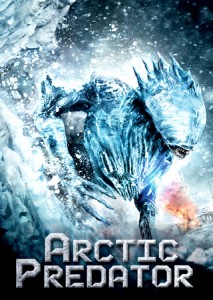 It would be very easy to confuse Arctic Predator (2010) with The Thing, but be assured they are very different films. While one’s about a shape-shifting creature that’s defrosted by scientists in the arctic, the other is about scientists who accidentally defrost a shape-shifting…. oh, never mind.

Make no mistake though, there are notable and crucial differences between the two films. For example, one film’s called Arctic Predator and the other is titled The Thing. It’s possible there may even be other differences but, overcome with a sense of déjà vu, you’ll probably find them hard to spot.

In Kurt Russell’s role, we now have former TV Superman actor Dean Cain, whose career seemingly went up, up and away at some point in the early Noughties. He’s leading a mission to find the wreck of an old sailing ship, which mysteriously sank in the Arctic nearly 200 years ago.

Inevitably, when they find and defrost the vessel they also thaw out the titular Arctic Predator. As the newly unleashed creature starts killing off the small team one-by-one, Cain must stop the monster before everyone is put permanently on ice.

So far, so similar, you might think. However, it would be unfair to accuse this film of doing a straight rip-off of The Thing, if only because it would appear that plundering just one suspense classic wasn’t quite enough for the movie’s ‘creative’ team.

How so? Well, just as you’re getting used to watching a flaccid re-run of Kurt Russell’s classic, up pops the homicidal ice monster – which looks uncannily like yon dreadlocked Predator chappie who gave Arnold Schwarzenegger so much trouble all those years ago.

In essence, you’re watching the movie equivalent of a ‘ringer’ car – a wonky, barely-operating whole made up from distended bits of other blockbuster vehicles.

Although largely bankrupt in terms of ideas and budget (just get a load of that Atari-level CGI), the film’s penurious approach does promote a strange strain of originality.

So, when they need a device to carefully defrost the delicate, centuries old artefacts from the sunken ship, a heat gun – yes, the standard type generally used for stripping paint – is pressed into service as if it were a sophisticated piece of scientific equipment.

There’s also a glorious scene where, after an impromptu amputation, someone cauterises the gaping wound using an iron. Yes, an iron. (Apparently, you can find the ‘wound-cauterising’ setting just between nylon and cotton steam.

Sadly, such moments of low-fi inspiration don’t stretch to the helicopter explosion which is the dictionary definition of routine.

Looking to escape the arctic base one of the team flies out in a helicopter during a violent storm. As he’s about to take off, the pilot is stabbed by our icy hunter but still manages to fly the chopper a short distance away from the facility. Alas, all too quickly he succumbs to his injuries so the whirlybird crashes to the ground and explodes.

Risible. The ‘explosion’ is a yellowy CGI smear that the director chooses wisely not to linger over.

None. We’ve already seen helicopters explode in the Arctic. Funnily enough, in The Thing.

Amid a veritable tsunami of rank cliché and banal rip-off, there is actually one genuinely good idea fighting to be noticed. It turns out the sailing ship that Cain searches for was captained by his distant relative, so there is a nice story arc about his life paralleling that of his forefather.

To avoid plot spoilers I won‘t go into specifics, but this idea goes off in a potentially interesting and dark direction at the end.

As a veteran viewer of low-budget, made for cable productions, I’m well used to hearing actors deliver execrable dialogue – but the Arctic Predator script is a whole new kind of bad. In fact, it’s not so much bad as just plain wrong. Let’s look at the prosecution’s ‘Exhibit A’, which occurs when the crew eventually realise they’re facing a homicidal ice monster.

“We got ourselves a situation here.”

For pity’s sake. It doesn’t ‘underline’ anything; it ‘understates’ the situation. Shakespeare, this ain’t.

There’s a glorious lack of empathy in this brief exchange:

[Immediately] “Did his plan work?”

The concern for the poor, departed doc is touching.

“Make no mistake, we’re flying out of here on this chopper.” (Unfortunately, as action movie genre rules state, the inverse of any emphatic statement given by a minor character must turn out to be true.)

Having grumbled through this review about how Arctic Predator is a rip-off of The Thing, it’s only fair to acknowledge that John Carpenter was also reinventing an earlier film, The Thing From Another World (1951).

However, whereas Carpenter was clearly producing a remake and bringing his own ideas to the film, Arctic Predator settles for nothing more than lazy plagiarism.

Review by: Jafo
Posted by Exploding Helicopter at 18:44