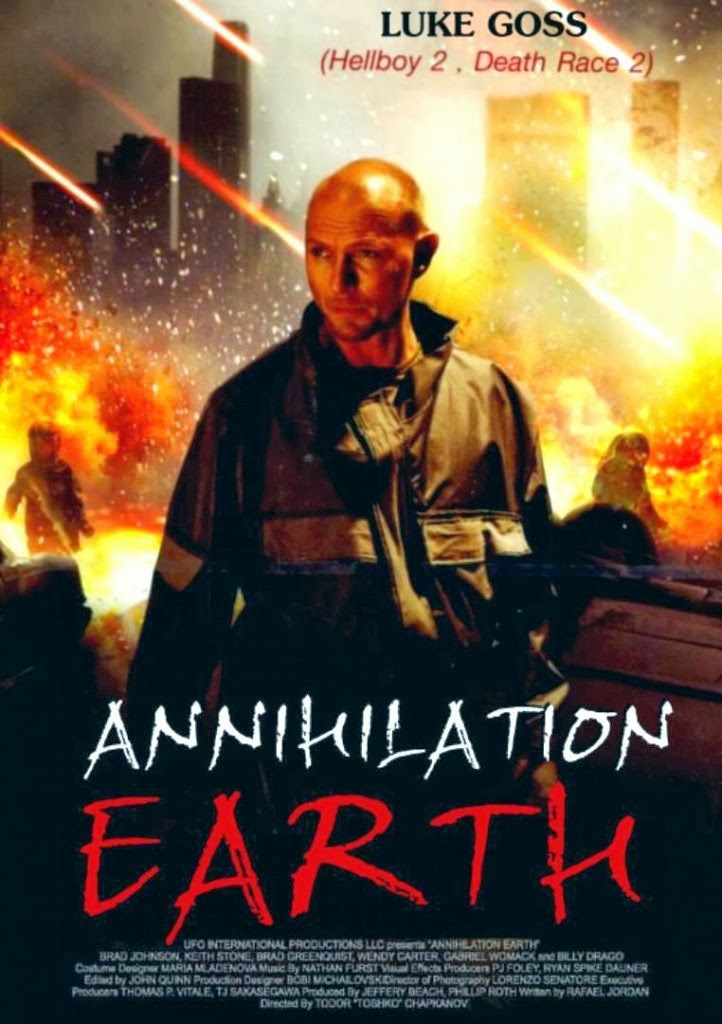 I like to think I’m an intelligent man. Nothing special you understand, but I can tackle a Sudoku and dent the cryptic crossword.

It also means I can follow most films. Sure, I might not understand every last nuance or layer of subtext, but I can generally follow the broad sweep of plot and theme.

Or at least, that’s what I thought. But after watching Annihilation Earth (2009), I’d absolutely not a scoobie what was going on.

Normally, I wouldn’t even bother to try and make sense of such a mangled cinematic experience. However, my obligations as a reviewer for a micro-genre film blog require me to at least attempt a brief synopsis. So here goes….

In the near future, the world’s energy crisis is about to be solved. A global network of Hadron Colliders are about to come online to provide the planet with all the clean energy it could ever need.

Happily, though, this is a disaster movie and not a promo video for the environmental movement. So predictably, there’s a fly or two in the ointment.

First, there’s the regulation-issue shady politician (Marina Sirtis) leading a high-level conspiracy to stop the technology being shared. And –  try not to fall off your chair from shock – but would you believe there’s also  a terrorist who’s hell-bent on blowing up the super-colliders? The film never  troubles itself to cast any light on the motivations of these shadowy characters, leaving the viewer clueless as to why anything is happening.

At first, I was going to quibble this point but, given how buttock-clenchingly poor the motivations of most movie villains are (remember the goon in Olympus Has Fallen who cited ‘Globalisation. Wall Street.’ as the trigger points for his traitorous actions?) that a dignified silence might well be the best option.

After the terrorist blows up one of the colliders, the whole power-generating network becomes dangerously unstable, threatening to destroy the entire world. Only a top scientist, played by Luke Goss – the distressed Levis-wearing, Grolsch bottle top-bothering former singer from Eighties pop moppets Bros – can stop the annihilation of the earth.

Now, if this sounds straightforward, it’s only because I’ve left out the guff where the Earth’s magnetic poles switch, earthquakes shake cities to the ground, and everyone faces the prospect of disappearing into the void when a black hole forms. Oh, and that’s not to mention the ‘doomsday equation’: some sort of mathematical flaw in the colliders that means oblivion was inevitable from the moment the damn things were turned on.

The effect of all this woeful incoherence is to leave the viewer caring not so much whether the world will end, but simply when the film will.

Perhaps embarrassed by its failure to make any sense, the film hastily gets on with the main disaster movie business of blowing stuff up – which entertainingly includes half of France. (Hollywood’s long-standing grudge against the cheese-eating surrender monkeys is a gift that keeps on giving).

Inevitably, amid such widespread destruction, the film-makers gamely throw in a chopper fireball to keep our flagging interests from waning.

The rotor-related mayhem occurs when Goss and a small team of scientists fly in to investigate the site where the first collider blew up. Conforming to disaster movie type, the helicopter develops a mechanical problem at the worst possible moment and plummets from the sky. Crashing to the ground where, it lies broken and smashed for a moment before exploding.

The crash is decently staged. There are lots of shaky camera shots from within the helicopter as the pilot battles for control.

The explosion though, is a dull CGI affair. It makes me wonder if, like the pre-programmed rhythm settings on a cheap keyboard, there’s a default ‘explosion’ setting that comes with all CGI software. If so (and straining the analogy to its breaking point), this conflagration had a definite ‘bossanova’ feel to it – cheesy and predictable.

I’ve wracked my brains and genuinely can’t come up with anything. Not a bean.

Naturally, main guy Goss and his team of scientists manage to scramble from the chopper’s wreckage and survive. But oh no! The pilot’s trapped in the cockpit.

With the helicopter about to explode, Goss tries to free the unfortunate aviator. However, realising that the chopper is only seconds away from fiery oblivion the pilot nods wordlessly at Goss, giving permission to abandon the rescue effort and save himself.

It’s meant to be a moving moment of self-sacrifice, but plays more like the actor simply lost all enthusiasm for being associated with Annihilation Earth any longer. I know exactly how he feels.

If the thought of a former boy-band lip-synch specialist as one of the world’s top scientists seems unlikely enough, the rest of Luke Goss’ scientific team is made up of silicone and collagen-enhanced dolly birds.

Still, science must be exhausting work. In no time at all, our lady professors are stripping down to their vests for no discernible reason. Cue much cleavage-focussed camera activity.

Later when one of the bimbos dies, she makes her final wheezing breaths look and sound suspiciously like an orgasm – which, in retrospect, may offer a clue as to the nature of her previous cinematic outings.

Curiously, in this American made-for-TV production, all the leads are British. Perhaps wisely, given he often struggled to convincingly lip-synch songs with only two lines in them, Goss is permitted to retain his standard Cock-er-nee accent. Colin Salmon, on the other hand, tries to disguise the clipped diction of his RADA-trained baritone with an accent that can only be described as ‘generic American’. By someone who’s plainly British.

Meanwhile, Marina Sirtis (Star Trek: The Next Generation) appears to be aiming for a Southern Belle twang. Unsurprisingly though, it keeps chaotically switching on and off, as if someone behind her was twiddling a giant knob and desperately trying to find the correct vocal setting. Edifying, it is not.

In a film where the script is made up entirely of deathless dialogue, no line epitomises the profound lack of danger or excitement better than: “David - we have to get back to Geneva.”

In his Eighties pop heyday, Luke Goss once sang: ‘When Will I Be Famous?’ Not any time soon, if this piece of prime cinematic merde has anything to do with it.

Review by: Jafo
Posted by Exploding Helicopter at 17:28