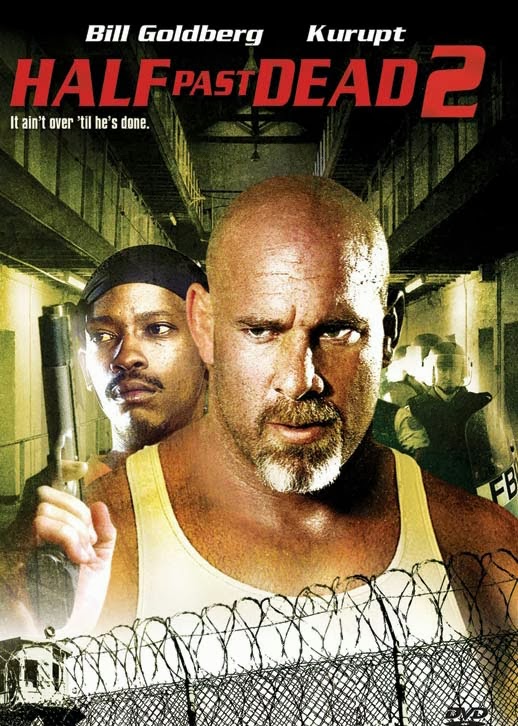 How bad does a film have to be before Steven Seagal won’t star in it?

It’s a question to which the numbed witnesses of such rank offerings as Against The Dark or the execrable Flight Of Fury probably feel there is no answer.

But, it would appear, the sceptics and naysayers are wrong. Impossible as it may seem, such a work does indeed exist: a film of such utter wretchedness that even Old Totem Face (an actor, let’s not forget, whose copious use of stunt doubles and over-dubbing means he’s often barely in his own films) felt unwilling to grace with his immobile presence

As the brighter ones among you may have already deduced, this is a sequel to Half Past Dead, in which the ‘divine ponytail’ played a policeman who gets sent to prison on an undercover mission. Ironically, given the title, the film completely flat-lined at the box office, killing off Big Steve’s Hollywood career.

Now, no-one’s going to argue Steve is bursting with MENSA potential – but even he realised that appearing in the follow-up to such a galumphing turkey wouldn’t be the best way to resurrect his ailing career, and duly passed. (Though allegedly, when he told the producers he wouldn’t be fighting, speaking or playing any meaningful part in the sequel, they initially thought he’d agreed to take on the role.)

Without Whispering Steve, the producers of Half Past Dead 2 had a problem: how to provide at least a tenuous semblance of continuity? Their solution came in the form of rapper turned actor Kurupt.

Painfully average rapper Kurupt (responsible for such timeless classics as Tha Streetz Iz A Mutha) had a blink-and-you’ll-miss-it cameo in Half Past Dead. It would appear that, on the strength of his non-performance as a gobby, irritating convict in the original, the producers duly decided to promote him to leading man status for this outing. (For an idea of how ludicrous this is, imagine making Argyle - Bruce Willis' limousine chauffeur in Die Hard - the star of Die Hard 2).

While such casting makes the film’s claim to sequel status rather dubious, the story does dovetail surprisingly neatly with the events of Half Past Dead. How so? Because it turns out Kurupt wants to escape from prison so he can recover the gold everyone in Half Past Dead was looking for. Unfortunately, a riot breaks out in the prison before he can put his plan in motion.

As anarchy spreads throughout the jail, one of the inmates seizes two hostages. In a plot contrivance too tiresome to explain, the captives happen to be Kurupt’s girlfriend and the daughter of another prisoner (more non-acting talent in the shape of wrestler-turned-thespian Bill Goldberg). Thrown together by circumstance, the two prisoners team up to rescue their loved ones.

This setup isn’t without potential. With Kurupt playing a cocky, motor-mouthed street punk and Goldberg as a taciturn, lumbering hulk who just wants to peacefully serve out his time, you have the makings of a classic mis-matched double act. (See Murphy and Nolte in 48 Hours, or Gibson and Glover in Lethal Weapon.)

Sadly, the fractious relationship that should power the movie emerges as a giant damp squib. While Kurupt holds up his end of the equation, injecting livewire sass into proceedings, the hapless Goldberg – despite his gigantic frame and shaven head – wanders through the film with an air of genial befuddlement, exuding all the danger of a giant teddy bear.

Equally limp are the fight scenes that punctuate the film. With veteran stunt co-ordinator Art Camacho handling directorial duties, one would have hoped for an A&E-tastic parade of neck-snapping, bone-crunching brawling.

What you get is a bunch of extras standing around waiting for their designated extra partner to throw an unconvincing looking punch at them. You’d likely see better – and, crucially, faster – blows delivered at a sherry-fuelled pensioner brawl down the bingo hall.

The overall effect is depressing – and the absence of any inspiration or spark makes watching this prison movie feel curiously like a 92-minute sentence of hard time. They say capital punishment is inhuman but, given the alternative of sitting through this drudgery again, I’d take the electric chair in a second.

Given the paucity of thrills elsewhere in the film, it’s no surprise to learn the exploding helicopter scene is a similarly dispiriting affair.

It occurs during an expository scene where, in an effort to get viewers up to speed with the plot, we see snippets from Half Past Dead. Readers with good memories will recall that the original film ended with an exploding helicopter and it’s this rotor-bladed conflagration we witness in flashback.

There’s only a brief shot of the chopper before the bomb on board explodes destroying the aircraft.

This is a tough one to review. On the one hand I enjoyed the chopper fireball in Half Past Dead. It’s a good explosion and the wreckage races dramatically towards the camera, so why couldn't I just enjoy it again?

I guess it's because for a movie enthusiast the whole scene feels like being palmed off with mouldy offerings from the reduced section after having paid for something box-fresh.

As Sex Pistols frontman Johnny Rotten famously observed: “Ever get the feeling you’ve been cheated?”

If your cup is half full, you’d say this was the first time a chopper fireball sequence from one film has guest starred in a sequel.

If your cup is half empty, you’d say this was the diametric opposite of innovation. ‘Unnovation’, if you like.

He only has a few scenes, but LaSardo is such a charismatic presence he immediately injects much needed drama into proceedings.

His distinctive appearance inevitably means he’s spent a full career playing crooks, gang members or prisoners. But what I like about his style is that he can be genuinely menacing or, if needed, bring a brittle kind of vulnerability to his characters. It’s this versatility which makes him more interesting than the majority of character actor heavies.

Rarely have I seen a film take place in such stygian gloom. Whole sections of the film take place in virtual darkness. The effect is not so much film noir as film opaque. Still given the quality of what I could actually make out on the screen, this may not have been entirely a bad thing.

No one has, as yet, made Half Past Dead 3. We should be grateful for small mercies.

Review by: Jafo
Posted by Exploding Helicopter at 19:13