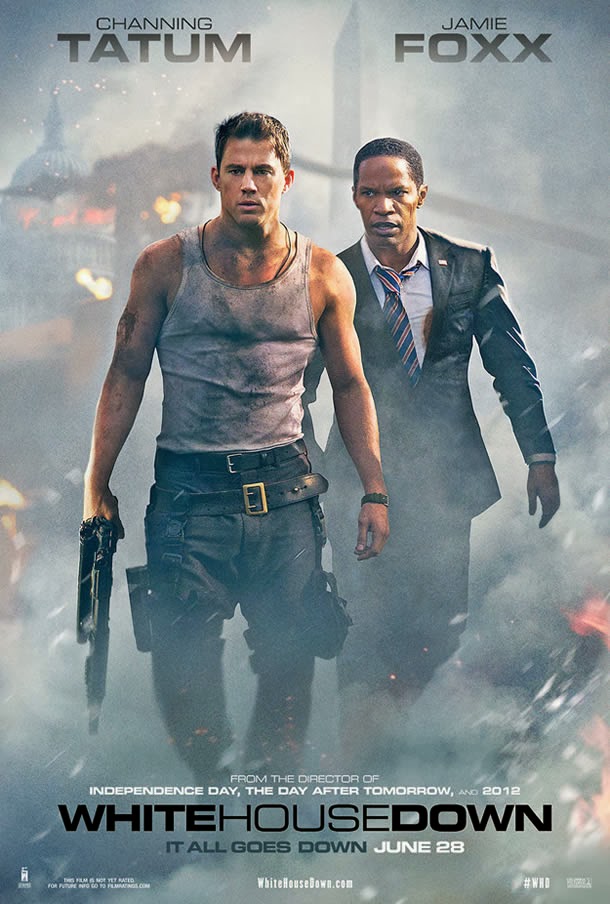 Action movies set in the White House are like buses: you wait ages for one then two trundle along virtually at the same time.

Following the lamentable Olympus Has Fallen, in which Gerard Butler saved the free world largely by stabbing people in the head and neck, here comes an altogether breezier take on the kidnapped President trope.

The plots of the two films are spookily identical. Both boast a washed-up hero, traitorous agent, ‘cute’ kid and secret bunkers. Even the fake money demands to mask dastardly nuclear ambitions are carbon copied. But where Olympus was set in rainy darkness and gloried in its wearisome uber-violence (there’s a lovely scene where a pension-aged lady is repeatedly kicked in the stomach), White House Down takes place on a sunny day and is, for all intents, halfway to being a comedy.

Certainly, Channing Tatum is much more likeable than Gerard Butler. (Having said that, Pol Pot was more likeable than Gerard Butler.) Normally, one should never trust a man whose neck is wider than his head, but Tatum lollops around the White House like a big, enthusiastic puppy and, between the cartoony fight scenes, gamely plays along with the film’s fromage-laden tone.

President Jamie Foxx, it turns out, is planning to withdraw troops from the Middle East so baddies storm the White House. Absolutely everyone is either killed or taken hostage – except Tatum and his precocious young daughter, natch.

While Tatum creeps stealthily around the corridors, still getting into scrapes at every turn, his tweenie offspring blunders around the entire building for ages without being spotted. She even records the baddies on her smartphone and posts the clips to news stations.

(Incidentally, it’s a chief failing of action movies that kids are always plucky, resourceful and insanely tech-savvy. One longs to see a kiddie hostage just sobbing in a corner in a puddle of their own urine, which is clearly what would actually happen.)

It quickly transpires that President Foxx has been betrayed by his head of secret service, James Woods. (Presumably, Brian Cox was busy). Tatum manages to spring the First Dude and, with the pair trapped in the building among hordes of terr’ists, all is primed for a classic buddy action movie. Which, against the odds, is broadly what you get.

Of course, this being a Roland Emmerich movie, half of Washington has to be destroyed first. Bye, bye, Capitol Building. So long, White House roof. (There’s also a self-reverential quip about buildings going up ‘like something from Independence Day’, which no-one but the director will have enjoyed.)

There’s a weird mixture of acting chops on display. Jamie Foxx, aware that this won’t be the movie to bag him a second Oscar, has fun with his faux-Obama role. Lance Reddick, a former big hitter from The Wire, puts on his best game-face and frankly brings more gravitas to his lines than they deserve.

Indie darling Maggie Gyllenhaal, on the other hand, barely bothers to hide how bored she is with her role. In Secretary, she became famous for having her bottom spanked. Here, it’s just her face that looks like a slapped arse.

Most weirdly, Jason Clarke – who spent the first 30 minutes of Zero Dark Thirty exuding genuine menace as he water-boarded an Iraqi captive – is here stared down by the 13-year-old moppet. (Many in the auditorium may have been wishing someone at this point had handed him a bucket of water, flannel and small plank of wood.)

One thing is certain: White House Down contains the finest collection of cod-military jargon to grace a screen in some time. Rather than merely see something, this is a world where people ‘have a visual’ or ‘have eyes on’ them. No-one wearing a uniform seems capable of getting through five words without mention of ‘wetwork’, ‘black ops’ or ‘payload delivery’. People with straight faces say things like: ‘Eagle is 30 seconds from the vault: we are coming in hot’.

Of course, not everything is good. The moppet daughter, Scrappy Doo in human form, is allowed to squander way too much screen-time. The fight choreography is ropey: numerous bad guys can be spotted patiently awaiting their turn to get shot or punched. Worst of all, while tussling over the nuclear button at the climax, super buff Jamie Foxx is comprehensively banjoed by 66-year-old James Woods, playing a man who’s terminally ill with cancer.

And yet, it works. Most action movies either play it straight or lazily point to their own crapness with a post-modern wink, as if that excuses everything. (Snakes on a Plane, anyone?) It takes genuine skill to make the audience guffaw at the daftness of the whole endeavour and yet still root for the good guys.

Happily, the film’s producers also seem to have put some thought into the exploding helicopter scene. It occurs when the reliably useless military bigwigs, unaware that the baddies are armed with ‘Javelin’ surface-to-air missiles, send in three choppers under the radar. (‘We have Black Hawks!’)

I hope this isn’t spoiling things, but they all get blasted to smithereens. Once hit, the first casualty careers in low over the White House roof and clips off the American flag, which flutters broken and twisted to the ground. (See what they did there? That’s called a ‘metaphor’, fact fans.) As tradition dictates, the second chopper then hovers around politely waiting to be hit – but it too crashes in a winning fashion, splurging into the White House pond to serve up a rare explosion and big splash combo.

That’s good, but it gets better. The third chopper has time to hover directly over the White House roof, and a dozen marines are already shimmying down long ropes when, oops, the final missile hits. Cue splendid shots of a huge Black Hawk swirling helplessly with flailing marines hanging on to the ropes like its some demented fairground ride, before the whole thing crashes into the roof and explodes.

It appears that some people actually sat down and spent time debating how they could most entertainingly splatter a few helicopters over the White House. Compare with Olympus Has Fallen, where the cinema audience literally couldn’t tell what was happening for most of the chopper scene.

Probably the most innovative thing about the whole scene is that Emerich has the brass nuts to let it unfold during a bright, sunny day. Most action directors, painfully self-conscious about the limitations of CGI, hide their chopper conflagrations behind cover of rainstorms or murky darkness. Our Roland has the sense to realise that if you only serve up the explosions in a fresh and quirky way, no-one’s going to be arsed about a bit of unlikely-looking pixilation.

When the third chopper crashes through the White House roof, its back rotor blade ends up spinning dangerously up against someone’s face and then stopping…just in time. This tired old trick, first deployed in Mission Impossible and repeated in countless films since, should surely now be allowed to see out its final days in the Exploding Helicopter Rest Home for Overused Scenes.

Despite creaking unsteadily towards his seventh decade, James Woods turned up at the film’s premiere slobbering all over his latest girlfriend: a 20-year-old moppet. That wasn’t creepy at all.

Review by: Chopper
Posted by Exploding Helicopter at 10:26