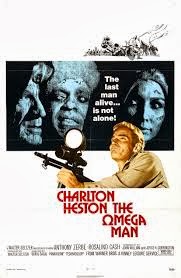 Charlton Heston was always either yesterday’s man or tomorrow’s man, but never a man for today.

That at least was the conclusion of the Hollywood producers who, when they tired of casting him in historical epics set thousands of years in the past, catapulted him into the future via a string of sci-fi films.

Chuck may have ached to star in humdrum contemporary dramas, but the poor sod always ended up either struggling with wedgie woes in tight spandex or trying to hide his gnads as he undertook action scenes in a skimpy toga.

By the end, he must have been desperate to just put on a pair of chinos and be done with it. Sadly though, it seems no-one could find a home for his lantern-jawed visage and hulking, rangy frame in a modern day setting.

In The Omega Man (1971), Heston plays the sole-ish human survivor of a terrible biological war that has killed most of the human race. All that remain are marauding gangs of albino-looking mutants who can only emerge at night due to their light-sensitive eyes. (For reference, think of pasty-skinned, nightclubbing Brits in Ibiza during the high summer.)

When Heston discovers other human survivors and realises there might be a cure for the virus, the stage is set for a deadly confrontation against the mutants with the survival of the human race at stake.

Crikey! That would be enough jeopardy to turn most men into quivering jelly but, for Chuck, this really is just another day at the office. After all, this is the kind of man who laughed at the might of the Roman Empire (Ben-Hur), who commanded oceans to part before him as a party trick (The Ten Commandments), and freed the human race from simian slavery barely without breaking a sweat (Planet Of The Apes).

Yup, with Charlton on the job we already know the fate of human civilisation will be safe. So, to keep things interesting, the film – set in an imagined 1977 – weaves in a little contemporary social commentary.

First, there’s a barbed critique of Sixties hippy idealism, most apparent in the scene where Heston sits in an empty cinema watching the 1970 Woodstock documentary. Clearly viewing the film for the umpteenth time, Chuck mechanically recites the interviewees’ aspirations about peace and brotherly love. We’re left to appreciate the irony between their vision for the world and the one Heston now lives in.

It’s also probably no accident that the mutants organise themselves into a group called ‘the Family’ – a not so subtle nod to beardy psychopath Charles Manson’s murderous cult.

Interestingly, even racial politics find their way into the film. Several clearly black mutants (remember everyone’s made up to look albino) refer to the world’s ills as a product of the ‘great white way’. Coming just a few years after the assassination of Martin Luther King and at the height of the radical activism of the Black Panthers, these words would have carried a resonance that’s easy to overlook today.

That’s what makes the romance between Heston and Rosalind Cash – one of the other human survivors – so striking. Inter-racial relationships onscreen were a rarity in 1971, and the film seems determined to shock by including a redundant scene where Heston and Cash shop for birth control pills.

Viewed today, the only jarring aspect of the romance is the large age gap and entire lack of chemistry between the two actors. But presumably when you’re the last man and woman alive on earth, you take it where you can find it. And, in fairness, such obvious obstacles didn’t stop Michael Douglas and Catherine Zeta-Jones from being married for over a decade.

Anyway, enough of such sociological ramblings. Let’s concentrate on the far more socially significant aspect of the film: the helicopter explosion.

This occurs in a flashback to events when the virus is first taking hold across America. Heston, an army colonel, is rotoring along to a military base.

As the helicopter is mid-flight, the pilot suddenly succumbs to the virus and slumps down dead in the cockpit. Heston is unable to control the ailing chopper, which plummets from the sky and crashes at speed into the ground with explosive effect.

Judged against the standards of the day, pretty good.

Director Boris Sagal employs a small cheat and has the helicopter disappear behind a low ridge so we don’t actually see it hit the ground. However, Sagal rapidly cuts to lots of burning wreckage so it‘s not like we‘re completely denied our pleasures. For 1971, this is an above average helicopter crash

Yes, Heston crawls clear of the wreckage. The pilot, if he wasn’t killed by the crash, was presumably finished off by the lurgy bacteria.

The opening scenes, which feature Heston driving through the desolate, deserted streets of Los Angeles, are as atmospheric an opening to a film as you could hope to see. It’s a powerful, eerie and disorientating entry into the film.

It’s entirely possible that film composer Ron Grainger was scoring a made-for-TV romantic drama at the same time as Heston’s movie, and accidentally sent in the wrong tape. In places, the whole enterprise is nearly ruined by his awful soundtrack. Imagine Jaws with the Sound of Music score and you’ll get the idea.

At one point, Heston says: “Take your stinkin’ paws off me you damn dirty mutant!” Okay, maybe I just wanted him to say it.

Filmmakers really did struggle to find modern day characters Charlton Heston could play. Between Ben-Hur in 1959 and The Omega Man in 1971, Heston made just two films which had a contemporaneous setting.

Review by: Jafo
Posted by Exploding Helicopter at 17:57