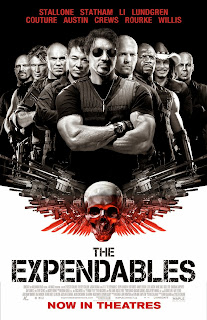 After a run of box office duds in the early Noughties (Get Carter, D-Tox, Driven), Hollywood decided that Sylvester Stallone was himself expendable and consigned him to the movie scrapheap.

Unable to get an acting gig, Sly licked his wounds for a few years before rebooting his career with sequels to the two franchises that had established him as a star in the first place. And while critical reaction to Rocky Balboa and Rambo was lukewarm, both films made handsome returns at the box office.

Counting purely on his own firm resolve – and some industrial-sized injections of human growth hormone – Sly proved, against all expectation, that there was indeed a market for watching pension-age action stars creak arthritically through the butt-kicking moves of their youth.

No surprise then that, for his first venture into ‘original’ material since the great comeback, Stallone opted not to stray too far from the profitable formula. If nothing else, The Expendables (2010) has no shortage of ultra-violence dispensed by doddery old folks.

The token plot (and let‘s be honest, this isn’t a story that invites scrutiny) has Stallone as the leader of a bunch of mercenaries for hire. They’re paid to assassinate a military dictator who is running a massive drug operation. Other than the obligatory rogue CIA agent, that’s about it.

Technically, this is an original work. However, despite his dopey features, Sly is much too sharp to have not recognised that the success of Rambo 4 and Rocky 6 lay in their nostalgic groove. Audiences don’t want him to move with the times, so much as go back in time. Retro, therefore, is the order of the day. 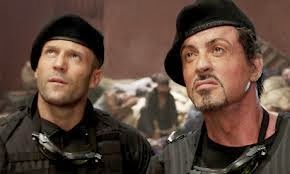 The style, mood and even cast – action stalwarts Dolph Lundgren, Eric Roberts, and Gary Daniels are exhumed from their DTV careers to co-star – are all classic vintage. The film couldn’t be more Eighties if you permed it’s hair, dressed it a shell suit and made it dance to Kajagoogoo.

Despite all the snapping bones and non-stop fighting, a warm, feel-good vibe permeates the film – one that trades heavily on the audience’s affection for these grizzled old bears going through the motions all over again. After all, besides baddies and grenades, they also now have to contend with lumbago and the possibility of losing a bit of wee mid-action scene.

In many ways, with its familiar cast of ageing reprobates getting up to no good, it’s like a peculiarly violent episode of Last Of The Summer Wine. At any given moment, one almost expects the Stath to slip on a woolly hat and start eulogising about Nora Batty’s saggy tights. (As it is, he instead opts for repeatedly pummelling someone’s face into a scarlet mush, but you get the general idea.)

Cheap bon mots aside, there is a serious point to be made. The Expendables works because Stallone understands why people love Eighties action movies – because they featured larger than life characters who visibly enjoyed their ass-kicking antics.

Compare, let’s say, Arnold Schwarzenegger’s Commando (1985) to the po-faced seriousness of the Bourne films, where Matt Damon blankly beats the bejaysus out of everyone with the bored indifference of a supermarket checkout worker. It’s easy to admire the Bourne films, but pretty hard to love them.

The Expendables may be full of genre clichés, but they’re delivered with love and affection rather than being cynically trotted out as a tick-box exercise. As such, it’s no surprise to see the movie delivering on the ultimate genre staple: the exploding helicopter. 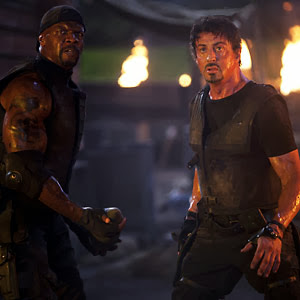 At the end of the film, Stallone and his men launch a huge assault on the villain’s HQ. Realising the game is up, Eric Roberts attempts to make a getaway in a helicopter. And with Sly prevented from reaching him by a wall of fire – and the whole base going up like a fireworks display – it’s looking like he’ll succeed.

Fortunately, Old Stroke Features comes up with an inspired piece of improvisation. One of his unfeasibly musclebound cronies throws an artillery shell (that conveniently happens to be lying around) towards the chopper and, as it arcs through the air, Stallone fires his pistol at the shell. Ba-boom! One flambéed helicopter coming right up.

The explosion is a whopper, big enough to satisfy every red-blooded chopper fireball fan, even if the CGI is a trifle too noticeable.

There’s also a good shot of Stallone diving away from the explosion in classic action movie style as he‘s nearly dismembered by a piece of flying shrapnel.

The ‘MacGyver style’ improvisation with the artillery shell and the pistol is a nice touch. While helicopters have been destroyed in more unusual ways, it’s rare to see a character being so intellectually creative in the execution of his plan. (And of course, having the words ‘Sly Stallone’ and ‘intellectually creative’ in the same sentence is a novelty in itself.)

Still, such ingenuity is not unprecedented. That renowned intellectual heavyweight, Steven Seagal, once used only a knife, paint-stripper and some advanced cub scout skills to blow up a chopper. (The film was Under Siege, fact fans). But then, you can tell Big Steve really clever by the way he almost says his lines.

The plot is commendably simple: kill the baddie and rescue the girl. At some point around the late Nineties, filmmakers started worrying that this formula had become exhausted and started throwing in lots of arsey sub-plots involving double and even triple crosses.

One day, Exploding Helicopter will get its protractor out and draw you the graph showing the inverse relationship between plot complexity and audience interest. 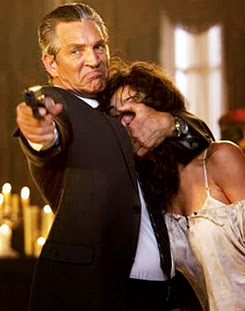 As much as we love the ensemble cast it does create a problem: how to squeeze everyone in?

Eric Roberts, ostensibly the main villain, has to share too much screen time with David Zayas’ inferior evil General and his character feels a bit undercooked as a consequence. Roberts’ henchman (played by Gary Daniels and Steve Austin) are also left with little to do other than scowl in the background before becoming human punch-bags in the film’s extended showdown ending.

Still, you can’t say Sly isn’t a learner. In The Expendables 2, which has a similarly sprawling cast, everyone is given a suitably memorable moment in the spotlight.

In a movie that celebrates action cinema, it’s pleasing to hear Randy Couture utter perhaps the genre’s ultimate cliché: “We got company”.

Dolph Lundgren’s character was originally killed off, but audience reaction to the blonde lunk in test screenings was so positive that scenes were re-shot to show he hadn’t died.

Review by: Jafo
Posted by Exploding Helicopter at 10:19