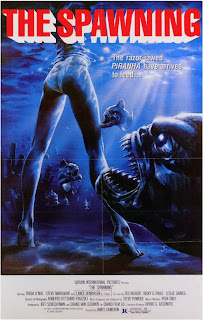 There always was something a bit soggy about James Cameron.

Certainly, the ocean has been a curiously recurrent theme in his career. The bearded wonder gave us watery weepie Titanic, submerged sci-fi thriller The Abyss, and not one but three award-winning oceanic documentaries. The man probably goes to bed in a life-jacket.

Even before all those Oscars and smashed box office records, he was out there sniffing the cinematic briny with his directorial debut: Piranha 2: The Spawning (1981). Unfortunately, it would appear the critics smelled something else entirely.

This cheapo Italian exploitation flick was one of a shoal of fishy thrillers churned out in the wake of Jaws’ all-consuming box office success. Predictably, given it’s origin as an unashamed cash-in, no-one wanted to rock the boat by having the plot swim too far from the formula of its carnivorous forefather.

So, in an entirely intentional parallel to Steven Spielberg’s mega-hit, the action takes place in picturesque coastal resort town. With cynical similarity, the seaside idyll is shattered when bodies start mysteriously floating ashore just as the town’s holiday season is about to begin.

Afraid of scaring off the tourists, would you believe the town’s unscrupulous bigwigs are reluctant to take action? Zounds. And so it falls to local sheriff Roy Scheider-sorry-Lance Henriksen to save the day.

So far, so seen it all before. But conscious of the jaundiced ennui of sofa-bound critics, the producers have lined up a surprise to jolt jaded viewers from their bored complacency. And that surprise is: these piranhas fly.

Yup, you did read that right. Where Jaws managed to get through a full movie without sprouting wings and Godzilla – to the best of Exploding Helicopter’s knowledge – never grew gills, Cameron clearly felt his fish absolutely needed to fly, goddammit.

Unlike your average piranha – equipped only with razor-sharp incisors – these fishy fiends use their fins to burst from the waves, zip about in the air, and dive-bomb unsuspecting sunbathers on the beach.

It sounds ridiculous. It is ridiculous. But it’s actually an inspired way to significantly up the jeopardy, since no-one, even if they’re on dry land, is now safe from the meat-hungry critters.

Attempting to swim against such a rising tide of silliness would leave most actors hopelessly lost at sea. Fortunately Lance Henriksen exudes an air of unperturbed cool in the face of increasingly implausible events.

It helps that he looks the part. Supermodel thin, with a baked-on tan and straggly unkempt hair tied back by a bandana, he roars around the ocean in a police speedboat looking more pirate than chief of police.

Piloting the police chopper (small and sleepy this town may be, but it‘s got a full complement of official vehicles), Henriksen flies out to sea to help a boat which has got into trouble.

Not having one of those fancy whirlybirds with floats that can land on water, Lance has to figure out how to get down and lend assistance to the distressed mariners.

Demonstrating the old adage that the best ideas are always simple, Henriksen solves the problem by simply leaping from the helicopter. With no-one at the controls, the chopper veers off, out-of-control, and crashes into the waves before exploding.

The helicopter that’s destroyed is clearly a model, but the scene is well enough staged and, when it comes, the fireball is big enough to hide all sins.

What’s particularly winning is the casual way in which Henriksen, having no more use for the chopper, simply abandons it to meet its doom. People have thrown away Styrofoam coffee cups with less abandon.

Helicopters have exploded after crashing into water in other films – for example, in The Guardian and Men Of Honor, but it’s a pretty infrequent occurrence. This is perhaps the earliest known example of a chopper meeting a watery demise.

Obviously, Lance Henriksen survives as he still has to save the town. And help Ripley destroy the Alien in several later, unrelated movies.

You might be wondering how the piranhas in this film developed the ability to fly. Luckily, here comes a crowbarred-in scene of clunking exposition to shed light on things. As a bit-part actor robotically explains, the flying piranhas are the result of that hoary old plot standby: the experiment gone wrong.

Apparently, during the Vietnam war the US military top brass came up with a plan to win the bloody and intractable conflict by releasing genetically-engineered super piranhas into the Mekong Delta. And people wonder how America lost.

Already struggling to be taken seriously, Piranha 2 makes the galumphing mis-step of attempting some moments of ill-advised comedy, which fall horribly, horribly flat. Exploding Helicopter would rather be gnawed to death by the titular fish than sit through these gruesome gags again.

There’s not a line here that bears repeating. Instead, let’s re-visit James Cameron’s own verdict on the film. Aware that this perhaps wasn‘t his finest directorial hour, he later offered the following tongue-in-cheek appraisal of his own work: “I believe The Spawning is the finest flying piranha movie ever made.”

While this is officially where Cameron’s career began, our Jimbo was reportedly sacked during the making of the film. Accounts vary as to what stage he collected his P45, with some saying Cameron completed photography on the film but was locked out of editing, while others insist Jim was fired after a week with the film’s producer shooting the film. He must have been heartbroken.

Review by: Jafo
Posted by Exploding Helicopter at 09:29