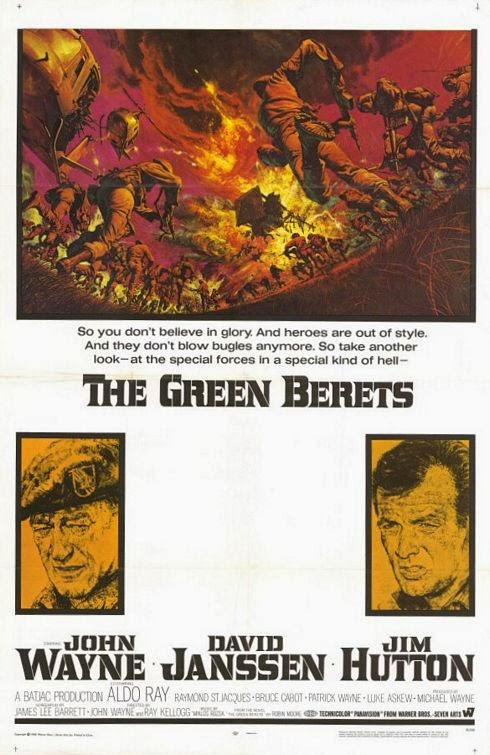 “I don’t do westerns,” said legendary composer Miklos Rozsa when approached to write the soundtrack for The Green Berets (1968).

“It’s not a western,” came the disingenuous reply from the film‘s producer. “It’s an eastern.”

Such semantic sleights may have tricked Rozsa into taking the job, but nobody watching the finished product will be so easily deceived. While ostensibly a war film about the Vietnam conflict, this couldn’t look more like a Western if you stuck a stetson on its head and attached spurs to the opening credits.

But we should hardly be surprised. The film’s producer, director and star is none other than John Wayne, a man who spent so much time in the saddle that eventually he walked as if he was still in one.

It’s entirely possible that the Duke (or Marion, as he didn’t like to be known) set out to make a realistic and contemporary account of America’s most divisive conflict, rather than a terrible faux-Western. But hey, guess which we got?

The Big Guy obviously had enough sway in Hollywood to get this funded – put simply, his name sold movies – but even the least savvy studio exec must have known in advance it’d turn out to be a spaghetti-shambles. Here are two reasons why.

First, Wayne was so rabidly, over-the-top patriotic – allegedly hating commies, liberals, fags, and pretty much anything not wrapped in a star-spangled banner – that this was never going to be a nuanced affair.

And as someone who is reported to have once told Playboy magazine: “I believe in white supremacy…I don’t feel guilty that five or ten generations ago these people were slaves”, there was no chance he’d give a fair depiction of the Vietnamese War. In fact, he couldn’t even get any actual people from Vietnam to be in the film: the enemy combatants are actually Japanese. 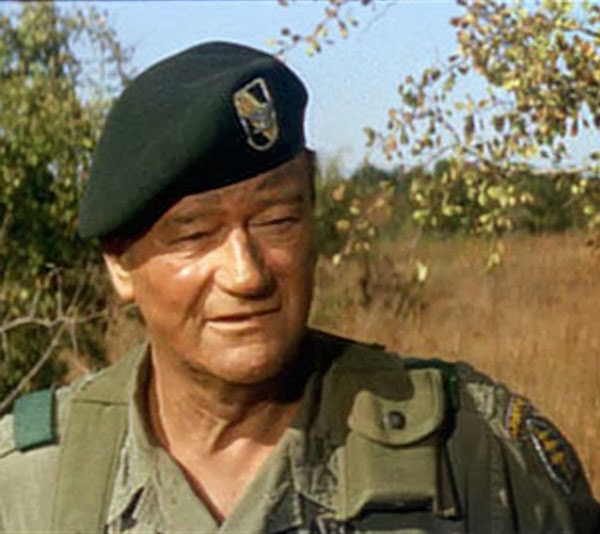 Second reason: the only thing Wayne could do was Westerns, and he’d been uniformly terrible in all but a handful of them. His best Westerns tended to be made with director John Ford who, wisely, told him ‘act with your eyes’ and quickly learned to cut most of the lines that the big man routinely murdered.

So when you consider the premise of this film – a bad actor in simplistic Westerns takes on possibly the most morally complex war of the century and turns it into a simplistic Western – you begin to see how problems might emerge.

And boy, do they emerge. Using one of his old cavalry pictures as a template, the Duke simply swaps horses for helicopters and replaces the Apache with the Vietcong. The cast, following their director’s lead, strut around as if they’re still in a cowboy movie. The plot’s shakier than a saloon bar door. At any moment, you half-expect to see a wig-wam in the background or a comic scene with a redskin ‘native’ looking for ‘firewater’.

Still, there is one thrill in this film that no western ever provided: an exploding helicopter.

Flying back to base, ’Charlie’ opens fire on the helicopter Wayne’s riding in. There’s a small explosion that causes the pilot to lose control. After plunging through the night sky, it crashes into the ground where the burning fuselage rolls over dramatically.

Several passengers just manage to scramble out of the wreckage, before the shattered remains fully explode. Ye ha!

This is a great exploding helicopter scene, especially when you consider the technical and special effects limitations everyone worked with way back in 1968.

When the chopper is hit by gunfire they’re clearly using a model, but as the scene takes place at night the trickery is cleverly hidden. After watching the whirlybird spin round trailing flames, we cut to a shot of a real helicopter (presumably attached to a crane) that swings across the screen before the flaming fuselage is dropped to the ground to complete the sequence.

While it does all look a bit, well, fake, you have to salute Wayne’s efforts to make the scene work with a clever combination of model and camera work.

There’s nothing new in the manner of destruction, but The Green Berets can lay claim to be the first Vietnam war movie related helicopter explosion.

The Duke, naturally, survives. The only disappointment is he runs away from the burning wreckage rather than slouching away in his trademark grizzly-bear-with-haemorrhoids manner.

David Janssen is a delight as a journalist opposed to the war who’s been embedded with the Green Berets. He looks majestic as he swaggers through the film in an unbuttoned safari suit, firing off cynical barbs at John Wayne and his men.

However, given this is a John Wayne stars n’ stripes affair – and achingly pro-Vietnam War – it’s painfully clear from the outset that our resident cynic is being primed for a clunky Damascene moment, where he’ll finally realise the glory of freedom and the American way.

It occurs when the Gooks launch a big assault of the Green Beret’s base and appear in no mood to spare the life a bleeding heart liberal – even if he can flash a press pass and an editorial condemning the war.

Before you can say ‘unconvincing conversion’, a lifetime’s considered pacifist beliefs are tossed away and Janssen‘s happily off firing mortars at those damn, dirty Gooks. Gawd bless America!

“What happened?”
“He bought the farm, but he took a lot of them with him.”

Apparently, John Wayne turned down the role of Major Riesman (played by Lee Marvin) in The Dirty Dozen in favour of making The Green Berets. Another sound decision from the Big Man.

Still want more? Then check out our Exploding Helicopter podcast episode on The Green Berets. Listen on iTunes, Podomatic, YourListen and Sticher.

Posted by Exploding Helicopter at 18:49