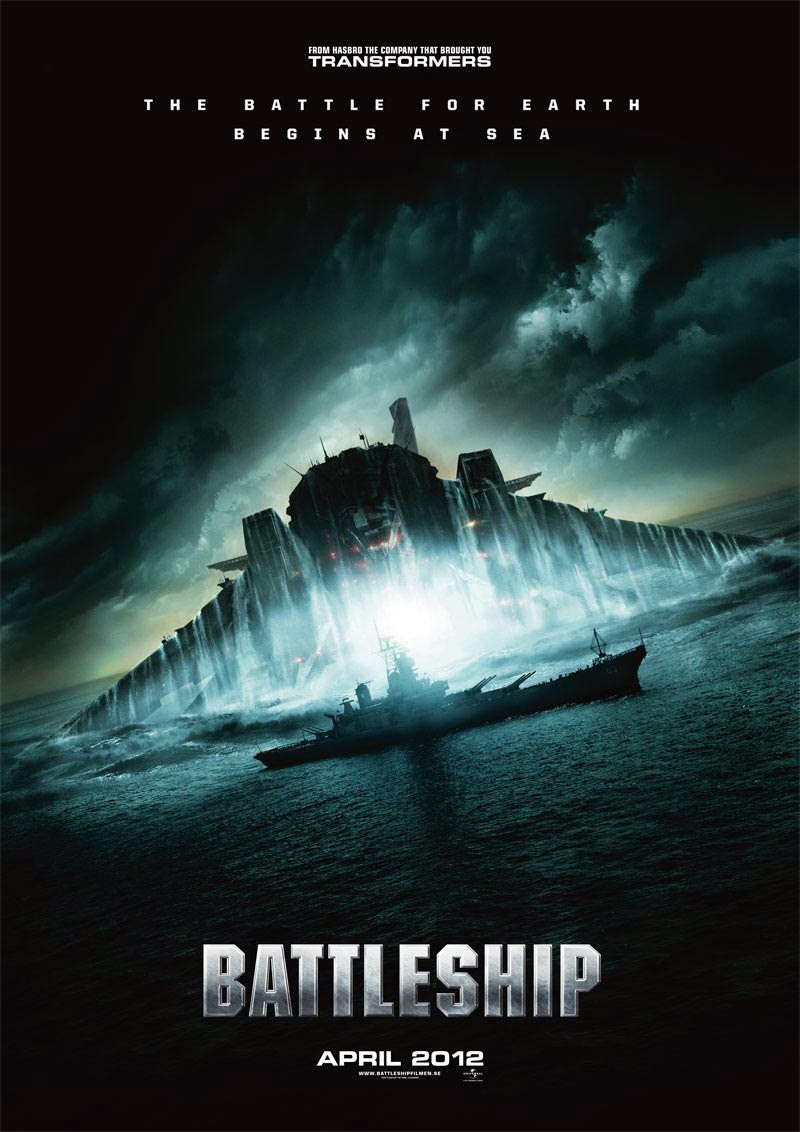 Who hasn’t wanted to be a soldier? Running around in the mud with a machine gun and a camouflaged, paint-smeared face. Wot larks.

If you didn‘t, then you probably wanted to be a pilot, scorching through the skies at Mach-2 while locked in a deadly aerial dogfight.

Odds are, however, you never longed to be in the Navy, meandering slowly around the world’s oceans doing, doing…..what is it they do, exactly?

Yup, there’s no hiding it: the Navy is boring.

It’s just a duller world – geared towards the complexities of fleet management, integrated modern weapon systems and sophisticated engineering mechanisms. Sorry, did you drop off for a moment there..?

When the brains behind Battleshit (and no, that’s not a typing error) came together, they no doubt swiftly realised they had a problem. How the hell do you make the dull logistics of modern Navy life thrilling to cinema’s key audience: pimply-faced teens?

Their answer, while not pretty, does have a certain base logic to it: give ‘em aliens, sex and guns. So they make the Navy repel an alien invasion, squeeze Rihanna into a booty-licious sailor outfit, and get Liam Neeson (cast here as a grizzled Admiral) to gruffly shout ‘Fire!’ a lot.

And that’s it, frankly. In the face of such brutal reductionism, nothing so flagrant as a coherent plot was ever going to make the cut. Everything here is about maintaining the attention of pubescent boys. That’s probably why – and try to keep a straight face here – the alien trouble starts when scientists try to contact another world by tweeting them. (Presumably something like: @E.T. r u aliens LOL.) See, kids, the movies are just like your life!

Incredibly, this genius idea backfires. (Maybe one of the scientists got drunk and sent a snapchat pic of their knob.) Whatever, the cousins from outer space send their reply in the form of five heavily-armed attack ships, rather than an amusing video of a cat repeatedly falling off a sofa.

As intergalactic conflict breaks out, Hopper, the buff hero, flexes his pecs and starts saving the day. It’s never explained why a work-shy pussy-hound is in the Navy, where slacking-off and fraternising with women are court martial offences, but that’s the least of this film’s inconsistency worries.

Oh, yes. Very soon, a much bigger question looms: does this day actually need saving? Weirdly for an alien invasion movie, these evil spacemen don’t actually seem too bothered about global conquest. For long stretches, they do na-da. Like intergalactic pikies, they just shuffle up, make a big mess of the ocean, then loaf around doing nothing.

This boring stalemate continues for ages, leaving the audience in the awkward position of having to watch actors hired for how buff they look actually trying to speak. (Neeson, the sole capable thesp, looks pig miserable in these scenes.)

It’s snore-worthy fare, though Exploding Helicopter was impressed by how they got Rihanna to stay in front of a camera for two consecutive minutes without baring her arse.

On and on it goes, like a leaky old boat taking on water. And by the time an old WWII battleship performs a handbrake turn (The Fast and the Funnelled, anyone?), everyone’s too weary to point out that ships don’t really do that.

And yet, just as the eyelids start to close, Battleshit comes up with chopper fireball action aplenty.

It begins peacefully enough, with the octuplet of helicopters parked innocently at their base posing no threat to anybody. Nevertheless the aliens head straight for them, providing a visual treat as the weird spherical spaceship devices barrel through the parked whirlybirds.

At times like this, one bemoans the lack of a collective noun for exploding helicopters. If a murder of crows or a conspiracy of lemurs, then why not a con-flame-gration of choppers? Hey, it could catch on.

There’s much to be said for exploding helicopter scenes that are unnecessary and gratuitous – and this one is the very apogee of needlessness.

The helicopters here aren't strategically important, they're not fitted with secret anti-alien devices. There's no reason to think they pose any kind of danger.

This palpable lack of threat lends the scene an aesthetic purity. It suggests exploding helicopters are an elemental property of film, above the mere petty demands of plot or logic – a phenomenon to be appreciated on its own terms and in reference only to itself. Which is to be applauded, of course.

A historic and record breaking 8.

The destruction of helicopters by aliens in this kind of actiony, sci-fi movie has become a yawn-inducing commonplace. (See Independence Day or Battle: Los Angeles for just two examples).

Given the choppers always get absolutely pummelled – and that such a contest is the aerodynamic equivalent of Macaulay Culkin vs Vinnie Jones with a nailed club – it’s actually refreshing to see the lumbering helicopters not even make it off the ground. And more realistic.

Watching Rihanna trying to act never gets old. Even mid-line, she looks about ready to throw an insta-strop and demand one of her ‘people’ bring her a truffle smoothie and baby panda to cuddle NOW.

Throughout Battleshit, many of the cast wear t-shirts saying ARMY or NAVY, presumably so she can tell the difference. (In earlier cuts, rumour has it the invaders also had to wear ALIEN t-shirts for the same reason.)

Almost everything. In particular, there’s a depressing certainty of knowing that, at some point, someone will have to drop the famous tag-line. So when Liam Neeson, of all people, finally says ‘You sunk my battleship!’ you can almost see his soul die a little inside.

(Fair enough: the film’s pay check probably bought the big man a swanky Malibu beach house. But if so, you can bet every time he sits out on the deck and suddenly remembers how he paid for it all, that iced cocktail will curdle in his mouth.)

The most famous review of this lumbering, over-long mess was a model of economy from which the film could have learned much.

Still want more? Check out the Exploding Helicopter podcast on Battleship. Listen to the show on iTunes, Podomatic, YourListen, Stitcher, or Acast.

Posted by Exploding Helicopter at 18:33