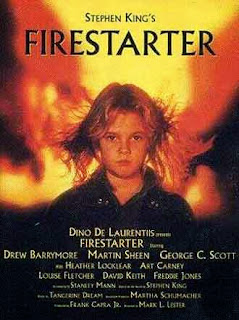 Widowed psychic Andy (David Keith) and his pyro-kinetic daughter Charlie (Drew Barrymore) are on the run. They’re fleeing a shadowy Government organisation known simply as "The Shop" who want to capture the pair and harness their spooky powers for their own nefarious ends.

When initial attempts fail, The Shop’s head honcho Hollister (Martin Sheen) hires crazed one-eyed goon John Rainbird (George C. Scott) to hunt the pair down. After Rainbird snares his prey, our heroes are locked-up in a top secret laboratory where Sheen subjects them to a barrage of sinister experiments. Will Andy and Charlie have to live out their days as human guinea pigs, or can they use their psychic powers to escape? Well, you won’t need the power of extra-sensory perception to guess what happens.

Now, when you call your film Firestarter (1984), you really need to serve up a sizzling hot entertainment. Unfortunately, this lukewarm offering is rather undercooked.

Much of the blame has to go to director Mark L Lester who allows the plot to gently simmer for far too long. So, instead of watching Charlie wreak pyro-manic carnage, the film gets bogged down in endless scenes of domestic drudgery as Dad tries to council his young psychic padawan about her deadly powers. It's like watching an X Men sequel played out as Ken Loach-style misery-porn.

Still, the film is not devoid of fun. Patient viewers are eventually rewarded in the final act when Lester finally turns up the gas and gives our heroes the chance to unleash their powers with unrestrained abandon.

As the title helpfully suggests, Charlie’s special skill allows her to set objects ablaze while her father can manipulate people by implanting suggestions into their minds. So as a legion of Government agents move in for the kill, our heroes are given bountiful opportunity to creatively use their abilities.

More entertaining though is how David and Barrymore demonstrate their freaky mental powers with their thespian skills. To convey the effort of using his Jedi-like mind tricks, David clutches his head whilst adopting a particularly pained and earnest expression. No doubt aiming for an air of Svengali-like mystery, he simply looks like someone trying stoically to deal with a bad case of piles. No wonder he was - according to Stephen King, on whose book this film is based - fourteenth choice for the role.

Meanwhile Barrymore looks no less ridiculous. Presumably unable to coax ‘psychic’ from his young E.T star, Lester just uses an off-screen fan to wildly blow her long tresses about. I’d not seen so much hair portentously billowing about since Bonnie Tyler’s ‘Holding out for a hairbrush’ pomp.

Unsurprisingly, given Firestarter’s slow-burning approach, it’s not until the film’s denouement that we’re treated to the exploding helicopter – and there’s no prizes for guessing its source.

During her escape bid, Charlie starts torching everything in sight. Pursuing agents and their vehicles are spectacularly turned to toast as the enraged brat becomes a human flamethrower.

Into this nightmare swoops a lone helicopter. Via a megaphone a passenger optimistically orders Charlie to "stay right where you are". Ever the obedient child, Charlie duly stands stock still, but only so that she can take careful aim at the chopper and blast it out of the sky with a fireball. Perhaps that instruction to stand still should have included an order not to torch aerial vehicles either.

The chopper conflagration is fitting addition to the numerous acts of destruction at the end of the film. The explosion is nice and clean and engulfs the chopper entirely. Extra marks for Charlie's pinpoint pyro-kinetic accuracy.

The first and only known exploding helicopter caused by pyro-kinesis.

Although it’s not necessarily the earliest use of psychic powers to destroy a chopper. Tanya Roberts used psychically controlled flamingos to crash a whirlybird in Sheena: Queen of the Jungle which was also made in 1984.

Not a chance. The pilot, and potentially an additional passenger that decided to man the loud speaker, were undoubtedly cremated in the explosion.

Barrymore, in her first post E.T. outing, is excellent as the kid trying to handle a set of powers that are ruining her life. Mr Sheen also puts in a typically well-polished performance.

The soundtrack, courtesy of new age synth warblers Tangerine Dream, has not aged well. For anyone who grew up in the eighties the ethereal plinking and plonking conjures painful memories of French mime artists and pretentious stage magicians. Awful.

Charlie McGee: "Get out of here, you bastard! I'll burn you up! I'll fry you!"

The book has had a few additional adaptations. 18 years after Firestarter, the direct-to-TV 'Firestarter 2: Rekindled' was produced - featuring Dennis Hopper and Malcolm McDowell. A series, set 20 years after the events of Firestarter, is also apparently in development.

Review by: Joe
Posted by Exploding Helicopter at 18:28