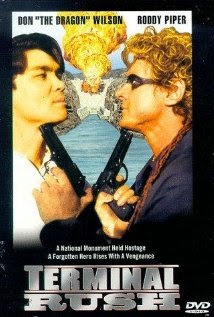 Jacob Harper (Don the Dragon) is a deputy sheriff in a small town near the Hoover Dam. As if having to fend off rednecks who harangue him because of his Indian (i.e. Native American) ancestry wasn’t enough to deal with, a team of heavily-armed baddies has taken over the dam. They threaten to blow it up unless they get twenty-five million dollars in ransom. (They’re holding the dam hostage, so that makes sense, right? Eh, never mind...)

Raising the stakes are the fact that Harper’s wife is pregnant and his beloved father, Nate  is trapped in the dam. Can Harper’s use his wits and martial arts skills to save the dam and his family? Or has he met his match – as the VHS box art suggests - in the villainous Bartel (Roddy Piper)? Will Harper’s mission be dam successful or dam impossible? And you thought we wouldn’t do a ‘dam’ pun in our introduction...

Terminal Rush (1996) is a scraggly straggler in the unending parade of nineties ‘Die Hard-in-a’ movies, and this ranks towards the back of the pack. While the opening of the movie is funny and completely ridiculous, with government officials spitting out random non sequiturs between credit titles, things quickly take a turn for the mediocre.

The film rapidly descends into a mindless shoot-em-up between no-one-knows-who. Incomprehension is compounded by the drab, washed-out look that director Damian Lee gives the film. It’s less Terminal Rush than Interminable Rush.

So why do we keep watching these things? Because we think our cinematic heroes, Don The Dragon
and Roddy Piper will save us. Granted, Roddy plays a rare baddie role here, but you get the point.

In classic fashion, Don’s character, Harper, is the ex-Special Forces, ‘if anyone can save us, he can’ type that’s regularly found in these films, but his character is rather a disappointment. Don’s martial arts skills are underemployed as he largely sticks to handgun action. The potential of his Indian ethnicity is similarly frittered away with dreadful one-liners like, “That’s a dreamcatcher,” after beating-up a baddie. If you didn’t just groan, feel free to do so now. Warning: it doesn’t get any better from here on out.

Bizarrely Roddy wears black eye-liner throughout. Just why he wears it - and he wears it for the entire the movie - is never explained. Equally entertaining is a black guy named Snookie (Warren). Truly he’s the original Snookie. The Jersey Shore cast members must be huge Terminal Rush fans. And what could be more apt than naming a little orange moppet after a strapping black gentleman? Plus his voice sounds exactly like Samuel L. Jackson’s. If you ever wished Jackson appeared in Terminal Rush, just close your eyes during Snookie’s scenes. You’re not missing much anyway.

Still, amid the sill beat-em-up scenes there is an exploding helicopter scene to punctuate the boredom.

In an attempt to re-take the dam heavily armed soldiers and a helicopter are called in. Unfortunately, Roddy Piper is well prepared for such an eventuality. Hauling out a missile launcher he takes aim at the whirlybird and removes it from the sky.

It’s a decent fireball. It’s big and orange and blossoms nicely on the screen. Roddy’s ridiculous Adam & the Ants inspired make-up only adds to the enjoyment.

First helicopter to be destroyed by a man wearing black eye-liner.

Terminal Rush might be a Terminal Bore but it does have one of our favourite items: repeated footage. Apparently some goons walking down steps while shooting machine guns was deemed so amazing, we have to see it multiple times.

Featuring the word ‘Terminal’ in the title of the film was a curious nineties phenomena. We go more deeply into this phenomenon in a review of Terminal Justice.

“It’s classic stupid if you ask me.” - Snookie

“A national monument held hostage. A forgotten hero rises with a vengeance.

This review is a guest post by our friends Brett and Ty from the great website Comeuppance Reviews. They're dedicated to celebrating action movies from the eighties VHS era. Check out their website and discover some forgotten gems.
Posted by Exploding Helicopter at 12:41