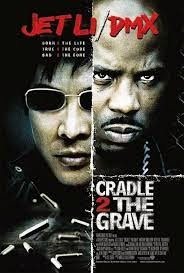 Rap-fu? Kung-hop? Hip-hop chop socky? While there isn’t yet an official name for this peculiar action movie sub-genre, you’ll doubtless know the type.

Yup, we’re talking about movies such as Exit Wounds or Romeo Must Die. Films where, through barely plausible plot contrivance, a noted martial arts star is teamed with a rapper.

On the surface, these double acts appear to make little sense. But look deeper and you’ll find a cunning logic behind these oddball shotgun marriages.

Your average martial artist, while expert in unarmed combat, tends to murder dialogue as easily as an opponent. As actors, they really should let their feet and fists do the talking.

What’s needed then is a motor-mouthed sidekick. Someone whose non-stop stream of verbal diarrhoea will distract the audience from their partner’s lack of thespian chops. Less Enter The Dragon; more Yo, Bum-Rush The Rapper.

All of which makes Cradle 2 The Grave (2003) – which pairs martial arts legend Jet Li with hardcore rap king DMX – a perfect example of the form.

Trouble starts when jewel thief DMX steals a consignment of rare diamonds. Unfortunately, a ruthless arms dealer (Mark Dacascos) wants the gems too, as – wouldn’t you know it? – they’re also apparently the secret ingredient for a deadly new super weapon. You never get that at H.M Samuels.

Also on the trail of the stones is a Taiwanese cop (Jet Li) who wants to stop them falling into the wrong hands. So when Dacascos kidnaps DMX’s daughter, it’s time for the rapper and martial artist to buddy up and knuckle up. 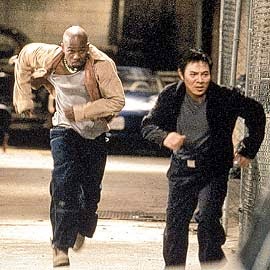 Can our odd couple heroes rescue the imperilled tot? Have they any hope of stopping the super weapon threat? And will their fractious love-hate relationship blossom into one of grudging mutual respect? (Exploding Helicopter doesn’t like to spoil things, but if you’re after a genre convention-busting movie maybe best look elsewhere.)

The wisdom of pairing the beat-em-up star with the beat-master becomes apparent the minute Jet Li opens his mouth. His line readings are as flat as a pancake. The world may be facing global Armageddon but Li makes it sound as worrying as missing a dental appointment.

Nuff respec’, then, to DMX for livening things up with his garrulous ‘gangsta’ persona. All bling, muscle and sneers, atti-tood emanates from him like that famous glow from the old Ready Brek adverts. Dis muvver been taking care of bizness! For reals.

It’s not a subtle schtick by any stretch, but the rapper’s angry histrionics add much-needed pep to proceedings.

Even still, it seems the producers were in no mood to take any chances. And as the ancient Chinese proverb (possibly) has it: why have one sassy loudmouth when you can have half a dozen?

Perhaps familiar with the rest of Li’s Hollywood output (the diminutive actor’s charm and quirky energy seem to evaporate in English-language movies), the movie-makers have stuffed the cast with more fast-talking wise-asses than you could twerk your money-maker at.

As DMX’s gang members, Anthony Anderson and Gabrielle Union add bountiful levels of live-wire sass. And just in case there was still a danger of insufficient jibber-jabber, Tom Arnold turns up as a loquacious ‘Mr Fix-it’. (This, naturally, is a thinly veiled reprise of the irritating gob-on-legs act he’s been doing on-and-off since trademarking it in True Lies.) 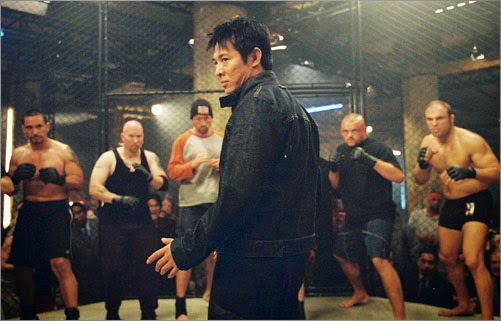 At times, there’s so much shouting, in-your-face posturing and pushing on show, you half-expect Jerry Springer to spring up and calm everyone down, before delivering a ‘heartfelt’ moral message to the screen.

Unsurprisingly, amid such verbal overkill, wee, silent Jet runs the risk of becoming an anonymous presence altogether. After all, the only things he has that can talk are his fists. Happily, the producers – realising that no-one wants the star to become lost in his own film – throw in loads of improbably-conceived dust-ups.

Perhaps the finest example, in a film filled to bursting with unlikely confrontations, is a spurious cage-fighting contest, which is entertainingly (and entirely unconvincingly) crowbarred into the plot.

A similarly over-the-top approach is taken towards the rest of the film’s action sequences. A quad bike chase through the streets (and eventually across the rooftops) of Los Angeles is an exciting example of this extravagance. So too is the finale where we treated to not one, but two exploding helicopters.

Events move to a small airport (always a favourite location for an action movie showdown). With his nefarious plans scuppered, Dacascos attempts to make an escape in a chopper. Fortunately, Tom Arnold has also turned up in a tank. (Don’t ask: it’s just that kind of film).

With Dacascos about to disappear into the skies, Arnold fires the tank cannon. The shell hits the chopper’s tail rotor which, in the time-honoured tradition of the exploding helicopter genre, causes the whirlybird to spin round wildly before crashing into the ground and exploding.

But wait. In keeping with the film’s bling-bling approach to excess, the first explosion of Dacascos’s chopper causes another nearby helicopter to blow-up. Cradle 2 The Grave? We call it Chopper To The Grave.

The first helicopter is a bit of a swizz. Despite causing a sizeable fiery eruption when it crashes, the chopper remains curiously intact. Well, not that curiously, as Dacascos has yet to have his chop-socky showdown with Jet Li, so needs to be able to crawl out of the wreckage.

But with no major characters on-board, the second helicopter explodes with such force that the entire chassis is thrust into the sky before falling back to earth. We’re given plenty of time to savour the moment as the sequence is loving played out in slow motion and repeated several times for our delectation.

While not unique, this is an extremely rare example of a tank being used to destroy a helicopter.

Rambo III (1988) includes the earliest example we’ve seen, where the crazed General Zayan pilots one into a tank driven by Sylvester Stallone in one of the most gloriously over-the-top games of chicken ever put on the big screen.

As already mentioned, Mark Dacascos crawls out of the wreckage though goodness knows how. Perhaps the villainous leather suit that he wears throughout has fire retardant qualities.

Cradle 2 The Grave has a ripe ridiculousness that makes it hard to resist. Logic and reality play no part in this film. Things happen for the sole reason that the audience may be entertained by them. And you know what? That's no bad thing.

Martial arts fans presumably spent the whole film waiting for the showdown between Jet Li and Mark Dacascos. But when their fight finally comes we can’t enjoy it, as the scene is choppily filmed and the action keeps cutting to battles other characters are engaged in. Such shoddy editing ruins the flow of the duel and what should have been a highlight ends up as a damp squib.

Someone enquires of Jet Li: “What are you? Some kind of kung-fu James Bond?”

Mark Dacascos was chosen as the villain for this film following a poll on Jet Li’s personal website asking which martial arts star his fans would most like to see him fight.

Review by: Jafo
Posted by Exploding Helicopter at 10:28