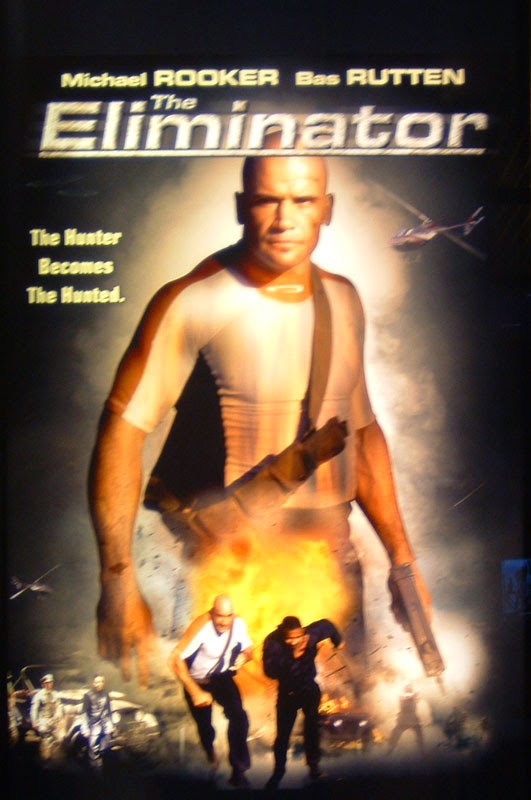 A dish is only as good as its ingredients. So when you take a generic storyline, add a non-actor as the leading man, and season with a low budget, you’re likely to end up with a plate of old tripe. Such is The Eliminator (2004).

Our star is former ultimate fighting champion Bas Rutten, who somehow decided a long career pummelling people in the face was ideal preparation for the thespian craft. But as this movie quickly shows, treading the boards requires a mite more skill and finesse than treading on someone’s windpipe.

He plays a down-on-his-luck professional powerboat racer, who’s drugged and kidnapped by an eccentric millionaire (Michael Rooker). It turns out the dastardly rich guy (aren’t they all?) wants Big Bas to take part in ‘The Eliminator’ - a deadly, kill-or-be-killed contest that pits uniquely talented desperadoes against each other.

Dumped on an escape-proof island, the contestants have to fight not only each other, but a horde of soldiers from Rooker’s private army. Still, the last man left alive will get a $10 million dollar prize. And the opportunity to continue breathing.

You’ll be forgiven for detecting a certain whiff of familiarity in the storyline, since it’s been reheated more times than a chip shop saveloy. (See The Running Man, Battle Royale and, more recently, The Hunger Games).

But at least those films threw in some cartoonish excess, savage social satire or earnest teen angst. And they had a few quid to throw around on splashy effects and diverting action scenes. The Eliminator, on the other hand, is not so much low-budget as no-budget.

But for all that, you’ve still got to admire the gumption of the film-makers. After all, here they are, presenting a film about a powerboat racer that’s set on an island, when it appears their meagre budget didn’t stretch to filming anywhere near any real-life water.

This produces not a few comedy gold moments. Take, for example, the unmissable scene where Rutten has to build a raft to escape from the ‘island’.

Unsurprisingly, the only thing that really appears stranded here is the director. Stuck up a creek without a paddle (note: this metaphor is the closest the movie will come to actual water), he takes predictably desperate measures.

Namely, he plonks Bas on a patch of sandy-looking waste ground then dubs in the sound of invisible waves gently breaking on a shore. Honest, you can almost smell the briny.

Had a couple of stuffed seagulls suddenly dangled into shot at this point while someone made ‘caw-caw’ noises off-screen, it would have been no great surprise.

Further evidence of the film’s penury can been seen in the film’s pound shop cast. Bas Rutten may have eloquent fists, but is utterly defeated by the challenge of delivering a line of dialogue. (His reaction to being kidnapped and thrown into a death-match is to act as if he’s unexpectedly won an all-expenses paid holiday).

Even worse is muscle-bound beefcake Paul Logan (Mega Piranha), presumably one of few actors on the current scene to envy the range and versatility of Arnold Schwarzenegger.

That leaves Michael Rooker alone among the cast as the as the only capable thespian on display. A reliable supporting presence in films such as JFK and Guardians of the Galaxy, Big Mike is incapable of giving a bad performance.

(This is partly due to his strange strangulated voice that adds an earnest intensity to everything that he says). Ever the professional, Rooker delivers a typically committed turn that the material scarcely deserves.

And it is Rooker’s mad and murderous millionaire that helps set-up the film’s exploding helicopter scene.

Tediously, we have to wait until the end of the film for our favourite fiery delight. Rooker orders in a helicopter to hunt down Rutten. After locating their prey, a soldier tries to shoot our hero from his aerial vantage point.

Taking cover behind a tree, Rutten uses a rifle to shoot the chopper pilot in the head. While Exploding Helicopter is always ready to be surprised, we were fairly confident from this moment on that the whirlybird wasn’t going to make a safe landing.

Sure enough, the chopper spins towards the ground where it crashes, explodes and is – in the parlance of the film – eliminated.

In keeping with the film’s shoddy standards, the viewer gets swizzed with the chopper fireball.

Actually blowing up a helicopter – or even something that looked like a helicopter – was clearly a budgetary impossibility. Therefore a dirty little cheat has to be employed

As the whirlybird makes its doomed descent it momentarily veers out of frame. The director then cuts hard to a generic shot of a fireball, where it’s impossible to tell what’s been blown up. Disgraceful.

Amid the cynical chicanery employed in the actual explosion, there is a little creativity for the jaded viewer. After Rutten fires his miracle shot at the pilot’s head, we cut to a point-of-view shot of the bullet making its way through the air in slow motion towards its target.

While it’s a long way from the fancy ‘bullet time’ cinematography in The Matrix, we were grateful for these crumbs of inventiveness.

There is a surprisingly decent scene early in the film. After being drugged and kidnapped, Rutten wakes to find himself in the back of a cargo airplane with the other Eliminator contestants.

Before anyone can find out what’s going on, Rutten and the rest of the competitors are hurled out of the back of the plane with parachutes.

It’s a cool idea (which is why why it's been used more effectively at the start of Predators) and heightens the disorientating confusion for the characters.

Having gone to great pains to establish Rutten as a powerboat racer, the viewer spends a lot of the film waiting for this fact to become relevant to the plot. Even now, long after the film has finished, I’m still waiting.

It rather makes you wonder if an elaborate, postmodern joke is being played. Why else would you make a film about a powerboat champion building a raft in a dry, featureless waste?

Given the film’s death match premise, the inevitable “Game over!” makes a predictable but enjoyable appearance.

Review by: Jafo
Posted by Exploding Helicopter at 08:08