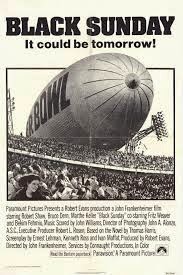 Black Sunday (1977) should be a disaster. This spy thriller has a plot so epically bonkers, it would make a Bond movie look like an espionage documentary.

Yet, in the hands of directorial master John Frankenheimer (The Manchurian Candidate, Ronin), the fantastical storyline is transformed into the basis for a genuinely gripping, pulse-quickening actioner.

So what’s so barmy about the plot? Well the basic premise is standard fare: Arab terrorists plot to attack America. (Twas ever thus).

What is unconventional is their crackpot plan. This involves blowing up the Superbowl game using an airship they’ve turned into a giant floating bomb.

Only a top Israeli secret agent can stop the deadly attack. Can he burst the terrorists’ balloon? Or will it be a ‘good year’ (Goodyear, geddit?) for the villains?

Robert Shaw (From Russia With Love) is the film’s hero. He’s plays Major Kabakov, a world-weary Mossad spy whose steely belief in his own superiority is matched only by his disdain for everyone around him.

In many ways, he’s a secret agent version of Quint, the salty seadog he so famously played in Jaws. All that’s missing is a scene where he shows off his scars while pretending – very unconvincingly – to be drunk.

He’s pitted against Bruce Dern, an unhinged Vietnam veteran recruited by the terrorists to fly the blimp. Dern, a long-serving specialist in crazed loon characters (see Silent Runnings, The Cowboys, et al), is here given free rein to unleash his inner crazy.

In one chilling scene, he cold-bloodedly engineers a man’s death just so he can test a nail-bomb. As the bloody, mutilated body slumps in front of him, Dern’s only interest is the symmetry of the holes on the wall behind the corpse. Yup, it’s fair to say the lad’s tuppence short of a shilling.

Despite clocking in at the best part of two and a half hours, Black Sunday is never less than gripping.

The extended runtime gives Frankenheimer the scope to not only stage several exciting action set pieces (a bloody hotel shoot-out and motorboat chase are highlights) but properly develop the characters of his two protagonists.

While most espionage thrillers opt for either psychological depth (The Spy Who Came In From The Cold) or pyrotechnic thrills (The Spy Who Loved Me), Frankenheimer deftly fuses the two approaches.

This pays dividends for Frankenheimer during the credulity-stretching climax. As the blimp slowly, and very visibly, chugs towards its target (whatever it may be, this is certainly not a stealth operation), Robert Shaw is lowered from a pursuing helicopter in a desperate bid to stop the airship.

Predictably, things don’t go exactly to plan and our Bob is left clinging on to the side of blimp, looking for all the world like a midget trying to hump a very, very big woman. All the while, he frantically tries to attach a hook so the behemoth can be towed to safety by the chopper.

By rights this sequence should be every bit as a ridiculous as the ‘jump-the-shark’ moment in Die Hard 4.0 when Bruce Willis hitches a ride on a fighter jet. But with the viewer already fully invested in the characters and their motivations, the scene feels more like a natural conclusion rather than an absurdity bolted on to the end. (Which, in truth, it probably is.)

This is a big budget Hollywood blockbuster, where good must eventually triumph. That means the terrorists are required to make a simple mistake that ultimately leads to their downfall. And what an avoidable cock-up it is.

Despite the attack being weeks away, one of the terrorists can’t resist recording the gloating message they plan to send the media claiming responsibility for the atrocity. Let’s just hope this damning tape doesn’t accidentally fall into hands of the Americans, giving them just enough information to track down the terrorists. Oh, wait… D’oh. 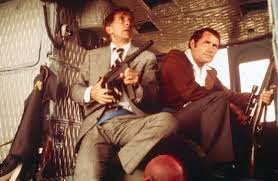 Not so much unwatchable, as inaudible. Robert Shaw’s attempt at a kosher Israeli accent is so bizarre, Exploding Helicopter was forced turn the subtitles on after 20 minutes. Oy vey!

Since the dramatic focus of Black Sunday is an exploding zeppelin, the film may seem an unpromising prospect for chopper fireball fans. Fear not! For during the film’s exciting denouement, there is also some exploding rotary action to enjoy.

As the airship languidly floats towards the Superbowl, a police helicopter is scrambled to stop it. Happily, one of the terrorists has brought along a machine-gun and energetically opens fire on the copper’s chopper.

Trailing smoke and flames, the wounded whirlybird loses altitude before it suddenly explodes. It goes up, ironically enough, like the Hindenburg.

Points have to be deducted for cheating. Rather than actually blow up the helicopter, footage of a fireball is superimposed over it. Due to the limitations of special effects in the Seventies, this trick was regularly – and unconvincingly – employed by filmmakers of the era (Diamonds Are Forever, for example.)

Watching today, it’s easy to sit and smirk. But Exploding Helicopter choses to salute these trailblazers who found ways to give us the chopper fireball thrills we craved despite the technical challenges of their day.

This blog has seen helicopters battle many different modes of transport: motorcycles, cars, airplanes, tanks, even trains. But, we’ve never seen one engaged in an aerial dogfight with a blimp. It remains unique to this day.

Understanding what makes a success or failure can be hard.

In Predator, Arnold Schwarzenegger immortalised the line: “Get to the chopper!” Sadly, Bruce Dern was unable to pull off the feat with his similar, but perhaps less catchy, “Get to the blimp!”

Maybe he should have tried it with a thick Austrian accent.

Black Sunday’s tagline is the perplexing ‘It could be tomorrow’. And indeed it might, assuming every day was Saturday.

Review by: Jafo
Posted by Exploding Helicopter at 12:40