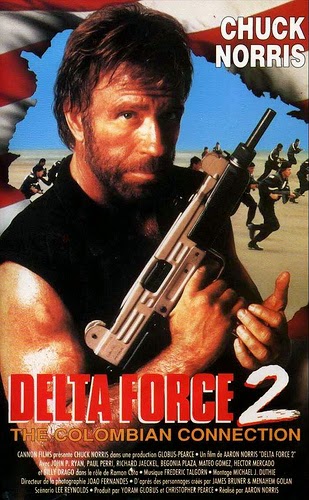 Has there ever been a more unlikeable actor than Chuck Norris?

Taciturn, charmless, and with a cigarette paper-wide emotional range, Chuck somehow managed to maintain a 30-year career as a Hollywood star. All while looking like a lion forcibly mated with a squat female bodybuilder.

Despite such barriers to success, audiences flocked to his films. And sadly for Exploding Helicopter, he’s the charisma vacuum at the heart of Delta Force 2 (1990).

A sequel to the jingoistic, patriotic tub thumper The Delta Force, Norris returns as Colonel Scott McCoy the taciturn, charmless Special Forces commander with an emotional range as wide as a cig…….. oh, you can guess the rest.

America is flooded with cocaine, so Chuckie Boy is given a secret mission to capture drug baron Ramon Cota (Billy Drago), who’s holed up in the fictional South American country of San Carlos. The assignment has extra piquancy for Norris as Cota brutally killed his friend.

Now, those with more inquisitive minds may be wondering where, given the title, Colombia fits into all this. All I can say is, don’t trouble yourself with trifling details like that. Certainly, no-one involved in making this film did.

Our star is Carlos Norris (as he doesn’t like to be known). Never the most demonstrative of actors, Chuck is in particularly inexpressive form here.

During the film our hero has to watch a video of his best friend being cold-bloodedly murdered by the evil Cota. So, how does Chuck react to this horrifying moment? Does his tormented face portray the frustration and helplessness his character must feel as he witnesses his buddy slowly expire?

Instead, Chuck stares blankly at the TV screen looking for all the world like a man waiting for the Ceefax page to change. And the Norris-nator’s leaden performance is not helped by the wildly divergent acting chops on display elsewhere.

As drug-lord Ramon Cota, Billy Drago gives a film-stealing turn of pantomime villainy. Listlessly lolling around his hideout, drawling his dialogue with theatrical relish he comes across like a homicidal lizard.

But Drago is made to look a modicum of restraint in comparison to B-movie stalwart John P Ryan, who plays Norris’ boss General Taylor. Twisting the over-acting dial to eleven, Ryan’s wildly eccentric turn appears to have no relevance to the film, the dialogue or even the part. He may be one of the good guys, but he’s potentially more nuts than anyone Norris is looking to bring to justice.

In case you thought Chuck was completely unmoved by the sight of his friend being sadistically killed, we do get a scene where he works through his grief and inner pain.

The weirdy-beardy decides to exorcise his demons and find emotional peace by beating up his entire Delta Force squad in an extended training montage.

"Feeling better?" Asks Chuck's boss as the battered bodies of the entire troop lie broken and scatted across the ground.

What a nice guy.

Many a bad actor (John Wayne, Arnold Schwarzenegger, et al) has been saved by a director savvy enough to accentuate their stars strengths while hiding their flaws. Unfortunately, John Ford and James Cameron were unavailable to direct Delta Force 2, so instead the film is left in the dead hand of Aaron Norris. Hang on, that surname sounds familiar....

Yup, you've guessed it. After 15 profitable years working as his brothers’ stunt double, Aaron was – in a shameless act of nepotism – elevated to the role of director. While Norris Jr. may know how to fall from the top of a building or jump through a window whilst on fire, it’s abundantly clear he hasn’t a Scooby about how to direct or edit a film.

Under his control, seemingly straightforward scenes take on peculiar, unintended tones, as the camera inexplicably lingers on actors after they’ve delivered their lines. In places, all the awkward pauses and silences make you wonder if the brothers Norris were trying for a Pinteresque deconstruction of the human condition. Though, of course, it's also possible they simply didn’t know what they were doing.

Against some stiff competition, perhaps the worst thing in this movie is Norris minor’s obsession with slow motion. I'm not sure Chuck delivers a single punch or kick without the frame being slowed to a crawl.

For fans of bone-crunching beat 'em ups, this Chuck-with-the-brakes-on routine becomes irritating. The easiest thing to do is just press fast-forward, which restores the fights to something resembling a normal speed.

Everyone's favourite form of fiery aviation doesn't arrive until the end of the film.

As Chuck attempts to make his getaway from Cota’s compound he’s pursued by a helicopter piloted by General Olmedo, a corrupt army officer who’s in cahoots with Cota.

When the car Chuck’s driving is crippled by rocket fire from the chopper, it looks like the game is up. With Chuck in the centre of his crosshairs, Olmedo – in typical villainous fashion - chooses to savour the moment and fatally pauses before administering the kill. (A familiar plot device taken to a high art by the Bond films).

The delay allows Chuck’s buddy General Taylor, piloting a helicopter of his own, to sneak up behind Olmedo and blast his opponent out the sky with a rocket. Having done the hard work the bonkers General gets to deliver the kiss-off line: “Bye-bye asshole.”

Innovation is not a concept that’s ever been knowingly embraced in a Chuck Norris film.

In recent years, Chuck Norris has become the subject of a famous internet meme. You know, that seemingly unending list of statements that attest to Chuck Norris’ incredible powers. Lines like “Chuck Norris doesn’t do push-ups. He pushes the Earth down.”

Interestingly, we can perhaps trace the origins of this phenomena to this film. Where after beating up a group of thugs in a bar, Norris is told off by a friend for breaking his promise not to get into a fight.
Norris replies, “I didn’t fight. I gave a motivational seminar.”

It’s well known that the laws of physics do not apply in films. And Exploding Helicopter has always been fascinated by the objects which take on curiously bullet proof properties in movies.

Roger Moore’s discovery of bullet proof snow at the beginning of A View To A Kill has always been our favourite, but Delta Force 2 runs it a close second by featuring munitions resistant straw. Amazing.

With a wooden leading man, a turgid script and the star’s stunt man brother directing, it’s not like this film didn’t have enough issues. But apparently Michael Winner was at one point set to make this film. Yee Gods.

We love the meaningless bollocks that’s regularly spouted in action films to give the dialogue a quasi-military feel. There’s a particularly fine example of the art here: “Eagle one, this is wildcard. Stranglehold is a go.”

Review by: Jafo
Posted by Exploding Helicopter at 13:39