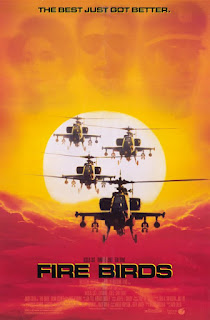 In 1986, Top Gun took the breath away (geddit?) of films fans around the world.

An exciting tale of testosterone-fuelled fighter pilots engaged in death-defying aerial dogfights, the film did however sport one noticeable flaw: no helicopters.

Fortunately, that grave error was corrected a few years later with the release of Fire Birds (1990) - or Wings of the Apache as it’s sometimes called.

This not-entirely-original film is ‘inspired by’ (Hollywood parlance for bare-facedly nicked from) the plot of Top Gun. Still, at least here they’ve made the obvious improvement of swapping all fixed wing aircraft for everyone’s favourite rotor-bladed model. Only makes sense, really.

America is losing the war on drugs. Narcotics are being smuggled across the border with impunity, as the evil (ie. foreign) cartels have hired a mysterious helicopter ace to shoot down US air patrols.

With their men outgunned and out-flown, Uncle Sam sends his top pilots to an elite flight school. Their mission is simple: prepare for a deadly and visually entertaining attack on their deadly foe.

Will our heroes complete their demanding training? Are they equipped to defeat their lethal enemy? Can they become Top Gun? (Well, would you want to ‘become a Fire Bird’? It just sounds ridiculous.)

Given the numerous similarities to Top Gun, it’s perhaps easiest to outline the Fire Birds cast in relation to the original players.

So, who’s playing the cocky, hot-shot pilot who has more to learn about humility than flying a helicopter? (In other words, the Tom Cruise role.) Yes, it’s everybody’s favourite horse-featured over-actor, hair replacement enthusiast Nicolas Cage.

As Cage’s love interest - the surrogate Kelly McGillis - we have Sean Young, who you’ll remember from Blade Runner – and frankly, nothing else.

That’s because the stroppy moppet was famously so crashingly horrible to work with, even by Hollywood’s own risible standards, that the entire film industry shut her out.

Meanwhile, Tommy Lee Jones stars as a gruff military task-master who belittles, berates and bullies his charges into finding their true potential as crack pilots. (Of course, any similarity to Tom Skerritt’s character in Top Gun is entirely intentional).

Normally a reliable and classy presence in any film, TLJ gives possibly the worst performance of his career. Forced by a duff script to deliver turgid mouthfuls of macho claptrap, the baggy-eyed thespian seems to visibly throw in the towel. Rarely have lines been recited on film with such monotone disinterest.

The only convincing moment comes when an ashen-faced Tommy quietly reflects on the horror of war. Though perhaps he was merely contemplating his next page of dialogue.

Just how similar is this to Top Gun?

Fire Birds even goes so far as giving Cage a dead best friend to grieve over. We all know Goose died in Top Gun. And it’s clearly where this film’s ideas of originality did too.

Mercifully, Fire Birds does spare us the sight, not to mention sound, of Nic Cage performing an a cappella version of a beloved Sixties pop hit.

But given the film’s sole attempt at an original scene involves Cage running around with a pair of scarlet coloured knickers over his head, maybe they should have just stuck to the karaoke.

What is the level of ‘Cage rage’?

Ah, Nicolas Cage. It’s quite possible that somewhere inside him is an actor of subtlety and craft.

Unfortunately, film fans remain stuck with the scenery-chewing show-off who has become a byword for actorly excess. Al Pacino could feasibly watch Cage’s movies and complain that, really, this is all a bit much.

From the moment the film begins, our leading equestrian seems determined to unleash the full range of his dubious talents. There are frequent outbursts of shouting, unexplained goofing, and the kind of exaggerated emotional responses generally only seen in an attention-seeking toddler.

All this grandstanding comes to a head in a marvellous scene of spectacularly unrestrained ‘Cage rage’. Practicing in a flight simulator, our Nic becomes so enamoured of his own abilities that he starts wildly shouting ‘I am the greatest’ over and over again.

Possibly the only thing more bizarre than Cage’s performance in this sequence is the fact that the director, and others responsible for this film, looked through this footage and agreed: “Yes, this is good. We can use this.” 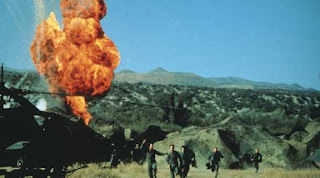 The film immediately throws us into an air combat duel between US pilots and the rogue ‘copter ace. After out-flying his opponents, the villain uses his chopper’s machineguns to shoot two whirlybirds out of the sky.

We also get two further helicopter explosions in the film’s big aerial finale, including Cage dramatically shooting down the villain after an extended dogfight.

And while you might expect the middle of the film to dip slightly, with too many ‘talkie’ bits and little of interest for the true chopper fireball fan, you’d be quite wrong.

In order to hone his skills, Cage is required to practice destroying enemy aircraft in a flight simulator. During the sequence, we get to see the Shergar’s less handsome brother shoot down nine – yes, nine – CGI helicopters.

The real exploding helicopters are pretty good. Fire and wreckage fill the screen, but there are none of the thrills that the chopper combustion cognoscenti appreciate. For instance, we don’t get to see flaming wreckage fall to the ground, or rotor blades violently sheering off.

Meanwhile, the flight simulator fireballs are basic in the extreme. Little more than pixelated yellow splodges. In fairness, this was 1990 when even cutting edge computer graphics looked little better than a crayoned drawing.

This is the point where Fire Birds becomes one of the most controversial films Exploding Helicopter has ever reviewed. Should the computer graphic helicopters destroyed in the flight simulator be counted in the final total?

It’s an important question as, were they to be included, Fire Birds would have a record breaking 13 exploding helicopters (Battleship is the current record holder with eight).

Having cogitated at length on this issue, Exploding Helicopter has felt it improper to include these chopper fireballs in the final tally.

Chopper fireball fans want to see real helicopters blown-up in all their fiery, rotor-bladed glory, not badly rendered computer graphics. Therefore, the final total has been officially ratified as four.

Only known destruction of a computer graphic helicopter.

The only similar examples we’ve seen are the animated chopper fireballs in Dreamworks’ Monsters vs Aliens and one in 22 Jump Street’s closing credits.

Sean Young uses a rocket launcher to shoot down a jet fighter before unconvincingly delivering the line: “Snort that, sucker.”

In keeping with a film full of empty bombast, the tagline is the entirely fatuous: ‘The best just got better’.

Still want more? Then you can listen to our discuss Fire Birds on the Exploding Helicopter podcast. Listen on iTunes, Podomatic or YourListen.

Posted by Exploding Helicopter at 08:51