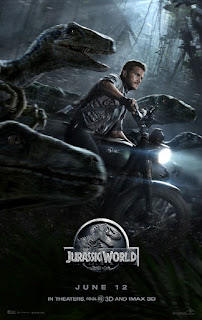 Like Tony Blair, grunge and TFI Friday, some things are best left in the nineties. So when I saw the trailer for Jurassic World (2015), I groaned.

Surely the dinosaur franchise, with all its CGI velociraptors and dino-shenanigans, was something best left in the ‘cultural attic’ along with all those discarded Furbies, Tamagotchis and Vengaboys CDs?

But, contrary to my jaded cynicism, it turns out I was wrong. Because far from being an embarrassing rehash Jurassic World is a rollickingly good action film. Maybe that big screen reboot of Saved By The Bell wouldn’t be such a bad idea after all. Then again…..

The dinosaur theme park envisaged in the first film is now a reality. Visitors can watch giant sea-beasts perform in an aquarium, tour fields of grazing diplodocus or cuddle baby triceratops in the petting zoo. (Surprisingly, the death and destruction depicted in the first three films proved no barrier to Jurassic World opening).

But with tourists growing bored of the prehistoric attractions the only way for the park’s owners to keep selling tickets is to unveil new and evermore exciting monsters. So, in a secret laboratory, a sinister scientist has created a genetically modified uber-dinosaur: the Indominus Rex.

Naturally, the hybrid-o-saur escapes its escape-proof cage and begins treating the theme park like a giant all-you-can-eat buffet. Caught up in the carnage are two young brothers visiting their flaky aunt, who is also the park manager. They team-up with the film’s hero, a former Navy Seal turned dino-researcher (apparently the skills are very transferrable).

Can the good guys survive? And will the villains be torn apart by monsters from millennia past? Well, if Jurassic Park one, two and three are anything to go by, then very possibly yes. 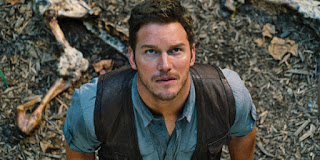 As the muscular, pecs-flexing hero, Chris Pratt bounces through the film with cocksure confidence of someone who’s read the script and knows they’ll make it safely to the closing credits.

He’s cast alongside Bryce Dallas Howard who follows up wretched turns in Terminator Salvation, Lady In The Water, The Village - frankly just about everything she’s ever been in – with another stinker.

She plays a cold-hearted corporate-wonk who makes an unconvincingly transformation into a fluffy bunny family-type. The scene where her frosty reserve finally melts at the sight of dying diplodocus is so feeble it makes her dad’s turn as Richie Cunningham seem positively Shakespearian.

Meanwhile, a paunchy Vincent D’Onofrio huffs and puffs his was through a role as a Machiavellian military officer. Our Vince once played a svelte soldier in Stanley Kubrick’s Full Metal Jacket. But, with his gut straining at his army fatigues, these days it’s clearly more Full Metal Corset.

There’s also an interesting supporting turn from Omar Sy in what’s traditionally known as the ‘black best friend’ role. Hollywood convention would normally dictate that Sy’s character provide a nice snack for a hungry dinosaur. But, in a surprising break with movie cliché the token black die man doesn’t die. Whatever next? Movies with interracial couples? 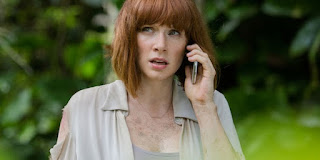 The death of the park manager’s painfully English assistant is simultaneously hilarious and gruesome. Posh, sniffy and slightly rude, she appears to have wandered onto set from an episode of Downtown Abbey. Plucked up by a pterosaur, the unfortunate archetype is tossed around a few times before a mososaur emerges from the aquarium and swallows the screeching cliche and pointy-beaked bird whole.

That’s good, but the ending is even better. This sees the Jurassic Park’s iconic T-Rex released from his cage to battle the hybrid-o-saur. Although not without help from a raptor and the mososaur.

Victorious, the T-Rex heads to a hilltop overlooking the park before roaring in triumph. It’s the dino-equivalent of Sylvester Stallone running up the steps in Rocky to celebrate that he’s still the champ.

With the mongrel-rex wreaking havoc, the park’s owner (Irrfan Khan) decides he has to act. Jumping into a chopper with a couple of soldiers he flies off to locate the mutant dinosaur. 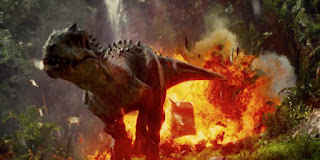 After tracking the beast down, they unleash a hail of bullets which makes Indominus run straight into a giant aviary (a sort Centre Parcs for pterosaurs). In a frenzy, the birds fly out the hole and start to attack the helicopter with one spearing their beak through the chopper’s windscreen.

Panic in the cockpit ensues, and the chopper spirals out-of-control, crashing through the roof of the giant glass dome, before exploding on impact with the ground. “You’ve just been made extinct,” quips the pterosaur. Or possibly not.

I can say with confidence this is the first time a chopper has been destroyed by a pterosaur.

While Chris Pratt explains the hierarchy of the velociraptors he’s training, a small boy asks him, “Who’s the alpha?”
“You’re looking at him kid,” comes the cocky reply.

The giant sea creature in the film is known as a mosasaur. These massive sea lizards weighed as much as 15 tonnes - roughly half the weight of the money this film has made (almost $1 billion so far).

Sure, there’s a few bum notes, wooden acting and highly improbable plotting, but this is a terrifically enjoyable movie.

Want more? Then listen to the Exploding Helicopter podcast episode on Jurassic World. Tune in on iTunes, Podomatic, YourListen or Stitcher.