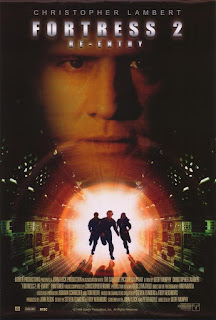 When Apollo 13 was launched in Cannes, one wag shouted at Tom Hanks that it was the most realistic space movie he'd ever seen. 'Absolutely no atmosphere', he said.

In much the same way, this may be the most credible 'innocent guy in prison' movie ever made. Because sitting through it feels exactly like serving a ten-year stretch for a crime you didn't commit.

In a more just world, this sequel to the barely serviceable sci-fi action flick Fortress (1992) would be locked up in solitary for crimes against entertainment. But instead - for you, dear reader - Exploding Helicopter kept its head down and did the time.

Our hero is John Brennick. He’s on the run having escaped a high-tech prison run by the evil Men-Tel Corporation (which is what happened in the first film).

Unfortunately, within minutes of the start of Fortress 2 (2000), Brennick is recaptured and sent to Men-Tel’s swanky new, even-more-top security jail.

Naturally our man resolves to escape. But breaking-out this time looks infinitely trickier. Certainly, it looks like tying together bedsheets might not work this time.

That’s because Men-Tel’s latest penitentiary is orbiting the Earth. Yup, that’s right. They’ve given it a sci-fi upgrade and stuck it [adopts booming, echo-laden voice] in space.......

Brennick is played by Christopher Lambert, beloved star of Highlander (and frankly not much else). While his cinematic oeuvre may be forgettable, the French thespian does possess a most unusual voice. His stereotypical Gallic purr is tempered by a constricted, raspy tone - as if someone were slowly throttling him. (There’s a joke here about Frogs croaking, but thankfully Exploding Helicopter is above such things).

Our Christopher is also utterly incapable of not sounding very French. You possibly saw him shouting 'Och aye, le noo!' in Highlander. And in Greystoke: The Legend of Tarzan even his gorilla grunts have a pronounced Gallic flavour. Short of stringing some onions round his neck and wearing a stripy jumper, his Le Tarzan couldn't be more French.

In the role of the cruel and villainous prison warden (aren’t they always?) is veteran TV actor Patrick Malahide. Normally found in prestigious small screen series like The Singing Detective, The Pickwick Papers or more recently Game Of Thrones, our Pat is clearly aware that these are not his finest moments before a camera.

Calculating that the only way to salvage his professional reputation is not to be caught taking this part seriously, Malahide delivers a performance of pure panto dame proportions. Cue over-the-top line-readings and theatrical eye-rolling. Shameless hamming it may be, but it does provide what little entertainment there is to be gleaned here.

Adding to the eclectic mix of stars is Seventies blaxsploitation legend Pam Grier. Given that Fortress 2 was made just three short years after her career-revitalising turn in Tarantino’s Jackie Brown, her appearance here is a reminder of how quickly the air can go out of your comeback. Just ask John Travolta. It's true: supposedly 'hot' actors can turn tepid faster than a half-filled February bath in Barnsley. It's a cruel old business.

What prison movie clichés are there?

Let’s see, is there an argument over who gets the top bunk? Yup.

Does a fight between two prisoners escalate into a mass brawl in the canteen? Affirmative.

And what about the obligatory scene where the warden warns inmates about doing their time ‘my way or the hard way’? But of course.

I could also mention the gratuitous shower scene where we watch a shapely female prisoner lather her nellies, but you knew that already.

Having regurgitated ever prison movie cliche imaginable, the makers of Fortress 2 at least have the decency to include every budding pyromaniac's favourite film trope - the chopper fireball.

This happens early in the film while Lambert is being recaptured. After his hideout is discovered, croaky Christopher attempts to flee in a jeep. As a helicopter pursues him, Lambert brings out a (handily loaded and available) bazooka and shoots at the chopper.

This is a nice fuselage-destroying explosion. We get to see the wreckage fall to the ground behind Lambert who does not look at the burning debris, because as we all know, heroes never bother looking back at explosions. The very idea....

Despite the general cinematic popularity of missile-bothering rotary aircraft, it is in fact unusual to see one in a prison movie.

The only other such film to include a chopper fireball is The Last Castle (2001) starring Robert Redford and his amazingly preserved head of hair (which really should have its own screen credit).

In order to escape, Lambert enlists the help of a small number of fellow inmates. His plan involves hacking into the prison’s communications system using a radio type device. This ends up with one of the prisoners boasting: “I can build a radio out of a milk carton and two condom wrappers.”

Sadly, as the prisoner fashions the device out of obviously more useful items, we don’t see them make good on this outlandish claim.

Arnold Schwarzenegger was at one time attached to star in the original Fortress. But after the Austrian word-mangler dropped out (to make Last Action Hero of all things) the generous $60m budget was cleaved to a modest $15m.

Check out other reviews by our friends at Explosive Action
Posted by Exploding Helicopter at 10:55