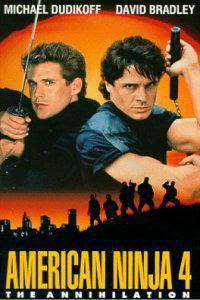 The term “cinematic universe” has become all the rage recently.

This rather highfalutin concept is used by moviemakers and nerdy film buffs to bundle together films and characters as a single, coherent, body of work. (Although to the cynics at Exploding Helicopter it’s just a pretentious way of saying sequel or spin-off).

But long before Marvel’s avengers assembled or the Fast teamed up with the Furious, the makers of the American Ninja series were boldly expanding the cosmos of the stealth assassin franchise.

It may have been in somewhat less celebrated circumstances. But, as we’ll explain later, the manner in which they did it was no less convoluted.

A renegade British army officer and a militant Muslim Sheik plan to blow up New York with a nuclear bomb. While they engineer their scheme the unlikely duo (who have as much in common as Woody Allen and Osama Bin Laden) hide out in a secret base in Africa surrounded by an army of highly trained ninjas.

Desperate to stop radioactive Armageddon, the US Government sends in a team of Special Forces. But when their mission is thwarted they form an unlikely alliance with a post-apocalyptic S&M biker gang (who just happen to be skulking about in the African veldt).

Will the Big Apple be reduced to a charred cinder? Can a bunch of gay bikers help our heroes? And will any element of the plot make sense? (Don’t ask me, I’m just the reviewer)

While American Ninja may have started off a straight-forward franchise, it quickly become a complicated mess of recasting and returning stars.

The first two films featured Michael Dudikoff as the karate-pyjama wearing hero. But when he declined further involvement, the series was rebooted with David Bradley as the new lead (American Ninja 3: Blood Hunt). Though, it wasn’t until American Ninja 4 (1990) that things really became complicated

Despite bailing on the series, the producers were still hot for Mikey Duds and persuaded him to return to start alongside David Bradley. Unfortunately, it quickly transpired that the American Ninja-verse wasn’t big enough for Dudikoff’s ego.

Clash of the egos

Legend has it (or at least IMDB trivia) that Dudikoff only agreed to participate in AN4 if his character was portrayed, at the expense of Bradley, as the real hero of the film.

So, rather than watch our two heroes work together to save the day, Bradley is captured so that the Dude can prove his alpha male status by rescuing him. In fact the film is almost derailed by Mikey Boy’s desire to trump his co-star.

Take for instance the scene where Bradley uses super-human reflexes to catch an arrow that’s been fired at him. Not to be outdone, the ‘koff proceeds to catch the arrow between his teeth. Honestly, I don’t know why they didn’t just get their cocks out and have done with.

By every conventional critical measure American Ninja is a mess. With a lopsided structure, an incoherent plot and warring co-stars it should be all but unwatchable. Yet, with its mismatched villains, nonsensical storylines, and bickering heroes it has a surreal anarchy that is unique.

I hesitate to call American Ninja 4 a good film. But it’s not a film you’d ever forget watching.

Despite so many films demonstrating their dangers, helicopters remain a curiously popular getaway vehicle amongst villains. And we’re given another illustration of that point here.

As his plan falls to pieces, the evil Sheik attempts to abscond in a chopper. As battle rages across his fortress, one of the rebels shoulders an RPG and fires it at the whirlybird. Striking its target the doomed helicopter explodes in a fiery eruption. Well, the film’s not called American Ninja: Annihilation for nothing.

Frankly, this was a disappointing chopper fireball. Sadly, the helicopter doesn’t really explode. Instead, an image of an explosion is cut in over the helicopter that was previously onscreen. The camera then cuts to the wreckage of a model helicopter falling to the ground. The director, no doubt conscious of the shonkiness of this sequence, wisely does not linger on this scene and hastily cuts away.

Erm, we’re stuggling with this one. Only the second known film with the word Ninja in the title to include an exploding helicopter.

My favourite line occurs during the rogue Sheik’s failed getaway bid. As he jumps into the chopper’s cockpit, the pilot asks, “Where too?”

The answer, showing no little knowledge of the Islamic faith, is simplicity itself. “Mecca,” comes the reply.

In a further expansion of the cinematic universe, David Bradley returned three years later for American Ninja 5 (1993) - although it’s debatable whether it should really be considered part of the series.

Having starred in entries three and four as the character Sean Davidson, observant viewers will notice that Bradley’s name in this film has mysteriously changed to Joe Kastle.

That’s because this ‘sequel’ was actually filmed as American Dragon and meant to be entirely unrelated to the Ninja series. But, just before release, wobbling producers hastily rebadged it as another American Ninja sequel on the grounds it’d be easier to market.

Check out reviews of American Ninja 4: The Annihilation by our friends at Comeuppance Reviews and DTV Connoisseur.

Posted by Exploding Helicopter at 18:16