The Beast Must Die 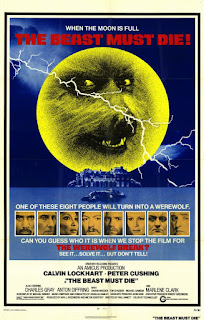 The horror movie is no stranger to unusual marketing gimmicks.

Back in the Sixties, B-movie shlock king William Castle pioneered the form with vibrating seats, ‘supernatural viewing’ devices and swinging skeletons that would suddenly appear above the audience.

But even the legendary shock-master himself might have blanched at the bizarre promotional ploy that rests at the centre of The Beast Must Die (1974).

In a cinematic first – and, admittedly, last – the movie features a ‘werewolf break’, a clunky device that offers the viewer an opportunity to actually take part in the movie themselves. Blimey!

A wealthy businessman and expert hunter invites an eclectic group of well-to-do friends to his country mansion.

But as his guests prepare for an evening of convivial hospitality, the dapper host drops his bombshell: one of them is a werewolf.

Which one of them is it? We don’t know, and it soon transpires that neither does the punter throwing the whole bash – but he intends to find out. Crikey. It’s a monster mash-up of a werewolf horror movie and a whodunnit. A weredunnit, if you will.

Our hero and werewolf hunter extraordinaire, Tom Newcliffe, is played by Calvin Lockhart. A stage actor of some note, he was the first black actor to perform in the Royal Shakespeare Company. We’re talking serious acting chops here.

However, given this was the Seventies – a period not entirely synonymous with opportunity for black actors – Lockhart’s cinematic career mostly consisted of pimp roles and blaxsploitation films. Still, at least he wasn’t in Mind Your Language.

(Interesting movie nerd note: Exploding Helicopter was thrilled to learn that Lockhart played dreadlocked drug-lord King Willie in Predator 2 where he mutters the immortal line: “There’s no stoppin’ what can’t be stopped; there’s no killin’ what can’t be killed.”)

Given this is a low budget horror romp, it’s no surprise to find Peter Cushing camping it up among the dinner guests. He plays Dr Lundgren, a German werewolf expert (naturally) who delights in treating his companions to the gory details of Lycan lore.

Also round the table is the redoubtable Charles Gray. A specialist in imperious toffs and suave villains (see his turn as Blofeld in Diamonds Are Forever) he’s in entertainingly sardonic form here.

A young Michael Gambon also appears as a down-on-his-luck musician. Well, we say young, but the bloodhound-featured thesp, here only in his early thirties, already looks around two decades older and well on his way to that glorious ‘bag of spanners’ visage we know so well.

So what’s this gimmick all about?

The Beast Must Die is not so much a ‘whodunit’, as a ‘you sodding work out whodunit’. That’s right: it’s up to the viewer to solve the mystery, by means of a mysterious cinematic device dubbed the ‘werewolf break’.

Here’s how it works. The movie opens with a title screen announcing that one of the cast is a werewolf. The viewer is also told it’ll be their job to work out who the furry villain is.

So, the film trundles along, liberally dropping clues all over the shop. Then right at the end, the action pauses and a big question mark appears on the screen. A narrator purrs: “Have you guessed who the werewolf is?” and a brief shot flashes of each character’s face. Next, a big clock appears on the screen and the viewer is told they’ll have just 30 seconds to come up with an answer.

Quite who the viewer is supposed to give their answer to, or to what purpose, is never quite made clear. Given Exploding Helicopter watched this film sat alone in his boxers in front of the telly, there was a significant lack of ‘edge’ to this pseudo-excitement. But it’s hard to imagine the experience would have been much more exciting in an actual cinema.

We’re given an early whiff of possible chopper conflagration entertainment when we see Newcliffe using a helicopter as part of his werewolf hunt. After tracking the furry menace from the air, the pilot lands the whirlybird so Newcliffe can pursue the beast on foot.

The wary werewolf evades his hunter and doubles back to the helicopter to attack the pilot who, in the traditional manner of horror movies, has just voluntarily left a safe environment to ‘have a look’, thus placing himself in imminent, and fatal, danger.

Our hero arrives on the scene and shoots at the loping lupine. But despite his reputation as a crack hunter Newcliffe misses both man and beast, and succeeds only in hitting the helicopter which promptly explodes into flame. D’oh!

Despite the film’s low budget, the fireball is nicely handled. A realistic-looking helicopter is set on fire and from the way it fearsomely burns, no expense was spared on the paraffin.

That said, the fuselage of the helicopter remains disappointingly intact. Exploding Helicopter always feels it adds extra drama if we see the chassis blown apart.

Lycan-related chopper fireballs are very scarce indeed. The only other known example is the lamentable Battledogs (2013). But this helicopter explosion does have one truly unique quality.

In accordance with werewolf lore, Newcliffe is hunting the beast with a gun loaded with silver bullets. So when the big game hunter strafes the helicopter and it explodes, it’s the most bling chopper fireball Exploding Helicopter’s ever seen.

Robert Quarry was originally cast in the role of Tom Newcliffe. But the film’s producers, keen to cash-in on the booming Blaxploitation genre, parachuted Calvin Lockhart into the lead role and tacked on a groovy, funk-tinged, score. Despite that, there’s no danger of anyone mistaking this film for Shaft.

“I’m no voyeur,” claims Calvin Lockhart, having just installed cameras and listening equipment in every room throughout his mansion in order to catch the werewolf.

One of these eight people will turn into a werewolf. Can you guess who it is when we stop the film for the WEREWOLF BREAK? See it ... solve it ... but don't tell!

Want more? Then listen to the Exploding Helicopter podcast episode on The Beast Must Die. Check it out on iTunes, Podomatic, Stitcher or YourListen.

Posted by Exploding Helicopter at 11:58