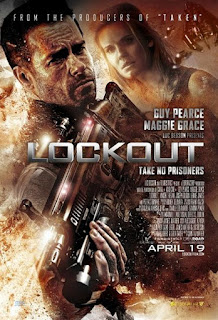 “Based on an original idea by Luc Besson,” boasts the credit at the start of Lockout.

But as it turns out, the wily Froggie's only truly creative contribution to the film is the above bold (and utterly bollocks) statement.

That’s because the garlic scented filmmaker’s 'ideas' actually originated from Eighties cult classic Escape From New York. That at least was the view of a court judge after the film's director John Carpenter successfully sued for copyright infringement.

And while Besson may feel hard done by with his 80,000 Euro fine it could’ve been worse. Just imagine if he'd been caught nicking ideas from the risible and totally unnecessary sequel, Escape From LA.

As may now be clear, Lockout (2012) bares more than a passing resemblance to Carpenter’s futuristic prison movie.

Kurt Russell Guy Pearce plays a sardonic anti-hero on the wrong side of the law. Sentenced to prison, he’s offered a chance of freedom if he rescues the President President’s daughter who’s fallen into the clutches of prisoners incarcerated in a futuristic jail in New York Space. Alongside this mission, our hero must retrieve a cassette tape suitcase containing vital information.

As you can see, this probably wasn't a particularly tough day at the office for that copyright judge. The scale of rip-offery going on here would even make a cinematic magpie like Quentin Tarantino blush.

No wonder Carpenter sued. This after all is a man who’s made such burningly original works as the definitely-not-based-on-another-film The Thing and the couldn’t-be-more-different-to-Rio-Bravo Assault On Precinct 13. Did someone say, 'pot kettle and black'?

In an unlikely piece of casting, ex-Neighbours 'big gallah' Guy Pearce plays Snow - the insubordinate CIA agent tasked with rescuing the prezzer’s progeny. With his gaunt face and collar bones you could hook a coat hanger on, the skinny Aussie normally cuts an unintimidating, wraith-like presence in his films.

But no doubt aware of potential embarrassment, the Aussie thesp has clearly been chugging the protein shakes and punishing his twiglet-like limbs in the gym for this role. For in Lockout he’s sporting the sort of buff bod you'd spot down Bondi Beach. Exploding Helicopter certainly wouldn't dare kick sand in his face.

It's the most compelling weed-to-muscles transformation since Adrien Brody, a man who reportedly had to gain weight to play a Holocaust prisoner of war in The Piano, turned up buffed to the max (though still with a weirdly skinny face) in Predators.

As the imperilled first daughter we have Maggie Grace, an actress who seems to be making an entire career out of being held hostage (see Taken 1, 2 and 3).

And bizarrely for a film about a futuristic American prison, the prisoner’s revolt is led by two thickly-accented Scottish hooligans (Joseph Gilgun and the ‘actually not Scottish’ Vincent Regan).

It continues a curious Hollywood obsession with populating sci-fi films with actors sporting British regional accents. (One only needs to see how often Sean Bean is cast in such fare for proof: Jupiter Ascending, The Island, The Martian, Equilibrium, et al). As Ridley Scott almost put it: 'In Sheffield, no-one can hear you scream, that's a terrible accent.'

For the makers of Lockout it seems nothing can quite convey the horror of a dystopian post-industrial hell more than a Gorbals accent. Presumably they’ve been to Glasgow.

Despite the onslaught of cliches and familiarity of its plot, Lockout nonetheless a ruthlessly efficient piece of action-adventure. The whole thing rattles along at a commendable clip, Pearce amusingly quips his way through a series of bone-crunching fist fights, and the credits roll after an economic, but entertaining 90 minutes.

None of which should really be a surprise. After all, Lockout is another film from Luc Besson’s Europacorp production line. For over a decade his company have specialised in knocking-out generic, action floss with just enough of a stylish gloss to elevate them above the DTV fare they so closely resemble.

In many ways, with their commitment to producing superior but undemanding genre fare, Europacorp are the natural heirs to Cannon who patented this approach back in the Eighties.

In a film crammed with familiar action tropes Exploding Helicopter was delighted to see that the director did the decent thing and squeezed in an exploding helicopter. This occurs early in the film before the action moves into space.

Pearce finds himself pursued by police after a clandestine deal he’s involved in turns sour. Making his escape on a motorbike, he’s chased by a futuristic-looking helicopter.

Our hero roars down a motorway, weaving in-and-out of traffic. Foolishly, the chopper tries to follow at low altitude. With pleasing inevitability the whirlybird clips some electricity cables which are stretched across the street.

The helicopter spins out of control and crashes into the tarmac, cartwheeling across the ground as it bursts into flame. Kaboom!

It’s not bad, but it’s not exactly good either. The whole pursuit sequence is rendered in low-quality CGI making it look more like something from a computer game than a feature film.

Little to report. We’ve seen power lines and cables bring down choppers many times before, for example in The Dark Knight.

Review by: Jafo
Posted by Exploding Helicopter at 13:14