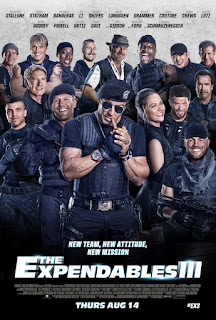 It had to happen eventually: the Frankenstein of Hollywood has gone and made a big lurching Franken-movie.

Little Sylvester Stallone has always looked a bit cartoonish, and in recent years it’s become increasingly hard to tell him apart from his own Spitting Image puppet.

That sloping, strokey mouth. Those freakish, pumped-to-the-point-of-bursting muscles. (Thanks, human growth hormone!) The surgically smooth, semi-melted-waxwork face. Whatever’s going on with that tar-black blanket on his head we’re supposed to think is his hair. The platform shoes so stacked they’d make Bono blush. He’s an absolute riot.

And with The Expendables 3 (2014), he’s finally made a film that is as odd, over-stuffed and unlikely looking as himself.

At heart, the first two Expendables movies worked because they followed a simple formula – build an ensemble cast, then add a carefully chosen smattering of guest stars.

But one gets the sense that ‘less is more’ possibly isn’t a dictum by which Sly leads his life. Thinking mathematically (and counting on his fingers), the old boy probably really did think that having literally twice as many characters in the new movie would make it twice as good. As opposed to shit.

Sly and his gang are getting old. At a certain point, all the hair dye and face lifts in the world can’t hide the fact that half this doddering lot are older than the cast of Last of the Summer Wine. So, after sacking the original Expendables crew, our ageing action star recruits a bunch of young, fresh-faced whippersnappers to take their place. (Cue a crazed, carousel-like introduction of new ‘characters’).

The first mission for the new team is to kidnap a notorious arms dealer (Mel Gibson) who also happens to be Stallone’s arch nemesis. Naturally, the assignment goes tits-up: the Italian Stallion barely escapes with his life and all his eager pups are captured.

With no time to introduce yet more characters, Stallone is forced to reunite with his old buddies (Statham, Lundgren, et al) in order to rescue the newbies who made such a Horlicks of their very first mission.

Will Sly save his kindergarten comrades? Can he settle his grudge with Gibson? Have all the elder Expendables taken their daily aspirin? Oh, the tension…

Frankly, with a cast this size, it’d be quicker to tell you who isn’t in this film. But here goes. First, the usual gang of Expendables are all in attendance: Stallone, Statham, Lundgren, Crews, Li, Schwarzenegger and Couture. Tick.

They’re joined on this outing by Nineties action also-ran Wesley Snipes, for whom this movie was something of a comeback effort following an unfortunate two-year spell in Sing-Sing for tax evasion. In the hi-larious opening scene, our Wes is – nudge-nudge, wink-wink – sprung from a top security prison by our jowly heroes. Ho, ho. See what they did there? Snipes really was in prison in real life, and now they’re showing him locked up in the movie and…oh, you did get it. Sorry.

Also relishing the opportunity of a little light career rehabilitation is Mel Gibson. Work has understandably been a tad scarce for Mad Mel in recent years, due to him being so busy with his alcoholic, wife-beating, anti-semitic and homophobic commitments. (Incidentally, if we’ve left anything out, forgive us; it’s hard to keep up with Mel’s misdemeanours).

And the additions don’t end there. There are walk-on roles for a clearly bored Harrison Ford, a mugging Antonio Banderas, a redundant Kelsey Grammer and walking Clearasil advert Robert Davi as the uber-villain. Phew!

Mercifully, there is one noticeable absentee: Bruce Willis. Despite appearing in the previous two entries, the chrome-domed diva was promptly dropped after demanding $1m dollars a day to work on the movie.

“Where’s Church?” asks Stallone in a pointed reference to Bolshie Bruce’s character. “He’s out the picture,” replies Harrison Ford, winking at the camera. It says a lot that this is not even close to being the crassest line of dialogue in the movie.

While that outline of the cast may have been exhausting, it wasn’t exhaustive.

As brighter readers will have noticed, Exploding Helicopter hasn’t yet mentioned the baby Expendables – which includes Twilight heart-throb Kellan Lutz and MMA badass Rhonda Rousey (these were the days before too much lounging around movie sets transformed her from an undefeated cage marauder into a human punch bag).

As you may have guessed by now, there are a lot of ‘main’ characters. And therein lies the film’s problem. There are simply too many people on screen, waiting around to deliver their one line of unconvincing dialogue. There’s no plot to speak of, just a succession of scenes crowbarring another actor into the action.

At times The Expendables 3 feels like watching a Royal Variety show. A succession of famous faces take centre stage for a couple of minutes, perform a potted version of their most famous act, then gladly disappear off into the wings. Had Bruce Forsyth suddenly come tap-dancing across the screen, it wouldn’t have been too much of a surprise. And he’s probably younger than half of them.

Given the film’s whole-hearted commitment to excess, you won’t be fazed to learn there are no fewer than three exploding helicopters to report.

One chopper bites the dust early in the film, always a cheering sign for aerial conflagration groupies. Having completed the daring Snipes rescue raid, and with no further use for the whirlybird, Stallone gives the viewer a cheap thrill by triggering an explosive charge and blowing it up.

The next chopper fireball scene, which takes place during the climatic action sequence, admittedly comes as quite a surprise. When two enemy choppers close in to take out our heroes, who should suddenly appear expertly piloting a helicopter but, er, Harrison Ford. Before you ask: Yes, that is the same Harrison Ford who, in real life, crashed a plane onto a golf course two years ago and, earlier this month, almost hit a commercial airliner carrying more than 100 people. Was this really the best casting decision? Maybe in the next instalment, Mel will be playing a gay rabbi who volunteers at a women’s shelter.

Luckily, contrary to popular rumour, fiction is way, way stranger than the truth. Because once the cameras are whirring, it turns out our Harrison is an excellent pilot. First, he effortlessly shoots down one whirlybird using his machineguns.

Then, pursued by the second baddie, old Han Solo deftly weaves in-between the giant chimney stacks of an old industrial factory – going perilously close to certain death – until his opponent loses control and crashes explosively into one of the vents.

And at no point during this scene does Harrison crash onto a large open green space nor almost fly into a crowded Boeing 737. Aren’t movies wonderful?

A definite case of quantity over quality. The chopper fireballs are done with embarrassingly poor CGI. In a film with a near $100m budget, it’s inexcusable. Having said that, chopper fireball cliché fans will enjoy the classic hero shot of the Expendables coolly walking away from an exploding whirlybird.

(Note: The movie’s final conflagration once more brings up a perennial bugbear of this website: why are movie chopper pilots incapable of avoiding entirely observable buildings?)

When Schwarzenegger turns up in a helicopter to evacuate our heroes, he gets to rather predictably yell: “Let's get to the CHOPPA!”

It’s a groaner, but you can’t help but enjoy it.

Review by: Jafo
Posted by Exploding Helicopter at 18:15