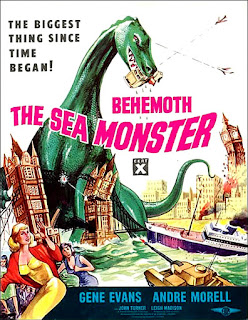 During the Fifties, cinemagoers just couldn’t get enough of the sight of mutant monsters destroying American cities.

Barely a week went by without some radioactive, scaly monstrosity laying waste to yet another bustling metropolis. It was the age of the ‘creature feature’.

But after San Francisco was mangled by a giant octopus (It Came From Beneath The Sea), Los Angeles invaded by super-sized ants (Them!) and New York reduced to rubble in The Beast From 20,000 Fathoms, moviemakers found themselves with an awkward problem.

Having effectively demolished the United States, there was nowhere left for their boisterous, building-bothering beasts to run amok. Then someone had a bright idea: why not shift the action across the Atlantic and have their latest atomic doom-monger destroy London instead?

And so, Behemoth The Sea Monster (1958) was born. Or, in this case, reawakened from its prehistoric slumber.

When thousands of dead fish mysteriously wash up on the beach of a Cornish fishing village, two plucky scientists are sent to investigate.

At first they can find no logical explanation. But after encountering further strange events, the boffins finally learn that a giant radioactive dinosaur is on the loose. Which, in fairness, would explain the fish. What’s worse, it appears that the skyscraper-sized horror, like many a naïve newcomer to these shores, has decided London is absolutely the place to be. (Clearly, it hasn’t heard about the tube congestion and outrageous rents.)

A nation gravely waits. Will the foul behemoth next trample the Houses of Parliament, break up Buckingham Palace, use Nelson’s column as a toothpick? Perhaps Blighty’s last remaining hope is that the monster lands in Hoxton and consequently disappears up its own arse.

Still, with the Big Smoke facing imminent destruction, it now falls to our scientific heroes to stop the radioactive menace. If the beast is to be defeated, then our plucky heroes will have to come up with a last-minute heroic act of derring-do in the very nick of time. As happens in every one of these monster movies. Really, the tension is almost non-existent.

Having shunted the action to good old Blighty, the producers were clearly keen to emphasise the point by giving a prominent role to a British stereotype.

Enter Andre Morell. He plays the scientist leading efforts to stop the monster. With his plummy voice and urbane manner, Morell enjoyed a profitable career playing upper class officer types throughout the Fifties and Sixties (most notably in The Bridge On The River Kwai).

But, wisely calculating that no-one wants to see Godzilla vs the Chinless Toff, Morell is partnered with American B-movie tough Gene Evans. With his craggy face and whiskey-soaked voice, our Gene was normally found growling his way through war movies and westerns.

Here, he’s unconventionally and unconvincingly cast as a radiology expert. Stiffly shuffling around a laboratory, awkwardly delivering mouthfuls of pseudo-science, Action Man Evans’ discomfort is plain to see. He’s clearly longing to throw off his lab coat and bayonet another Nazi or wrestle a tomahawk wielding Indian. So, when the film’s denouement requires a volunteer to take on the sea monster in a submarine, it’s no surprise to see whose hand goes up for the job.

Anyone who’s watched a few monster movies will likely think they know how the plot runs: monster emerges from the ocean’s depths, stomps on buildings, and sends the civilian population into a hysterical panic.

But those films weren’t taking place in Britain – home of John Bull, the stiff upper lip and that famous English reserve. Rather than run screaming from a radioactive giant that has just squished his house, the average Englishman is more likely to stand his ground and enunciate: ‘I say. That’s a bit rich.’

So when the radioactive dinosaur starts marching across England’s green and pleasant land, it doesn’t encounter the usual cowering populace. Oh, no. In fact, its first encounter is with a ruddy-cheeked, trigger-happy farmer who tries to see off the beast with his trusty shotgun. Literally: ‘Get orf my land!’

It quickly becomes apparent, in fact, that our heroes’ main battle may not be with the creature at all but with Britain’s government, who remain singularly unmoved by the threat they’re facing.

After laying out their plan to tackle the monster, one decidedly unimpressed Whitehall mandarin huffs and comments: “All this? For an oversized crocodile?”

Very droll. But while such moments may accurately reflect the stuffy calm of the British character, they do rather rob the film of sense urgency.

During the film, an aerial search for the beast is launched by a couple of expendable extras in a Westland WS-51 Dragonfly. (These unlucky chaps are the Fifties monster movie equivalent of the Star Trek crew members in red jumpers who teleport down to an unknown planet with Captain Kirk. You just know they won’t need a return ticket.)

Our pilots locate and close in on the creature which uses its radioactive powers (which the film never actually specifies) to destroy the helicopter.

One moment the aircraft is there, the next there’s an intense white glow and sudden shower of sparks. And poof! It’s gone.

Cinema’s most significant trope had to begin somewhere, but it’s a pity such a momentous cinematic tradition began with such a modest example.

The special effects are about as spectacular as an indoor firework. And further marks have to be deducted for a continuity error where the helicopter - a WS-51 Dragonfly - suddenly turns into a WS-55 Whirlwind seconds before it explodes. (I know, Exploding Helicopter is terribly fussy about such things).

Still, this is film history so the director deserves credit for seeing the audience-thrilling possibilities of blowing up a helicopter in a movie. Sir, we salute you.

It all began here folks. This exploding helicopter is the earliest chopper fireball we’ve yet discovered. (Previously that distinction had been held by James Bond’s sophomore outing From Russia With Love).

It is also the only known exploding helicopter shot in black and white.

Nobody could accuse the marketing team of underselling the film with this description:

“SEE the Beast that shakes the Earth! LIVE in a world gone mad! WATCH the chaos of a smashed civilization! FLEE from the mightiest fright on the screen! NOTHING so Big as Behemoth!”

The cast here is pretty unremarkable, but British sitcom fans should keep an eagle eye out for a disturbingly young Leonard Rossiter (Rising Damp, Reginal Perrin) who has a blink-and-you’ll-miss-it bit part. No sign of ‘Oooo…Miss Jones’, though.

Review by: Jafo
Posted by Exploding Helicopter at 14:56