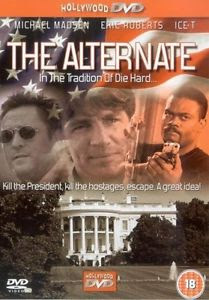 A team of thieves-posing-as-terrorists take the occupants of a tall building hostage. One grizzled law official leads the fightback – climbing lift shafts and swinging around outside the building. All the while helped by a buddy cop down on the ground.

Sound familiar? Yup, you guessed right: it’s The Alternate (2000). Why, what else were you expecting?

Similarities to, ahem, another hostage building-based movie are of course entirely intentional. The marketing blurb on the cover even makes a feature of its plagiarism, proudly boasting: ‘In the tradition of Die Hard’. Presumably, in much the same way those knock-off sports vests with upside-down ticks are ‘in the tradition of’ Nike. You have to admire the chutzpah.

Still, we shouldn’t be churlish. Who doesn’t want to watch another movie filled to the brim with expertly choreographed action, pulse-quickening drama and witty one-liners? Unfortunately, this isn’t it. What you get here is more Try Hard than Die Hard.

While hosting a charity function, the American president is taken hostage by a group of terrorists. But unbeknown to POTUS, the abduction is actually a PR stunt to boost his re-election campaign. (Quite what the Prez has done to get himself in lumber with the voters isn’t specified. But it’s no doubt much more serious than publicly mocking disabled people, championing white supremacists, or bragging about grabbing strangers vaginas, because these days such actions are guaranteed ratings winners.)

Anyway, as is often the way with smart movie plans, something goes wrong. Unsurprisingly, one of the ‘fake’ kidnappers realises there’s much more money to be made by genuinely grabbing the commander-in-chief and demanding a humungous ransom.

All looks lost. But luckily for the fate of the free world, a ‘maverick’ CIA agent is on hand to save the day.

Let’s call a spade a spade. Much like Alan Rickman’s baddie (though with none of his roguish charm), this movie sets out to commit a daring, wholesale robbery – namely of the plot and characters of Die Hard. So let’s look at the actors, such as they are, through the prism of the Bruce Willis classic.

In the John McClane role, we have jobbing actor-for-hire, Eric Roberts. Yes, that Eric Roberts. The one who started out as a hotly-tipped young gun in such well-regarded movies as The Pope Of Greenwich Village and Star 80.

And yes, the one who, after some spectacular substance issues and a series of poor career choices (and let’s face it, one problem may well explain the other) saw the juicy roles dry up. Today, the one-time Oscar nominee is mostly known for being Julia Roberts’ estranged older brother.

Unusually, the role of ‘happy, friendly cop on the ground’ has here been taken by gravelly grumbler and sometime ear-slicer, Michael Madsen. Long known as one of Hollywood’s laziest actors, Big Mike has been phoning in performances for straight-to-DVD junk such as this for over two decades.

But perhaps his somnambulistic approach to the actor’s craft reached its very apotheosis here, as Madsen literally spends the whole movie yakking to Roberts on a mobile phone. Yet you still get the impression he can’t really be bothered.

There are many bad and lazy actors out there, but perhaps only Madsen could view the task of saying a few words into a pretend phone for a lot of money as an unreasonable ask.

And of course no Die Hard imitation would be complete without an urbane villain to engage our hero in a compelling battle of wits. It appears that the peerless Alan Rickman must have had clashing film-scheduling commitments and been unable to grasp at this career opportunity gold. So instead we have Canadian B-movie beefcake, Bryan Genesse (Cyborg Cop III, Cold Harvest).

Genesse plays a rogue CIA agent whose blackmail plan requires him – at various points in the film – to pretend to be an Arab terrorist called Ahmed. In order to keep the ruse going, big Bryan puzzlingly adopts a French accent whenever speaking as the not-obviously-Gallic extremist. (When you think about it, Le ISIS doesn’t really have a ring to it.) It’s all hopelessly confusing.

Given such a dog’s breakfast of a character and such painful dialogue, most actors might simply shrug their shoulders and console themselves with this thought: “Hey, I didn’t write this.” That’s not so easy for ‘Le Bryan’, however: he penned the script.

For all its Die Hard similarities, The Alternate does have a unique if rather surreal spin on the whole ‘terrorists in a tower block’ trope.

For instance, we’ve yet to see Bruce Willis electrocute a henchman by booby-trapping a cup of coffee, or fight off a female villain wielding – I kid you not – a sharpened lipstick.

These scenes are mere preludes though, for the film’s action coup de grace. This sees Eric Roberts engage Bryan Genesse’s baddie in a machine-gun duel while swinging across a swimming pool on piece of bunting. It may sound terrible – and indeed it is. But console yourself that it’s still not quite as bad as anything in A Good Day To Die Hard (whose reviews contained such high praise as ’crassly opportunistic’, ‘irrevocably stupid’ and ‘like a near-death experience’).

Part of Genesse’s plan involves faking his getaway, and making the world believe he died in a big explosion. (Yup, there really isn’t a single Die Hard plot device this film doesn’t snaffle for itself.)

In an extraordinarily convoluted sequence, our rogue-CIA-agent-turned-French-Arab-terrorist-impersonator makes an escape by flying off from the roof of the hotel in a helicopter. But wait! As he does so, Genesse jams the controls of the chopper and – unseen from the ground – jumps from the whirlybird back onto the hotel’s roof.

As the aircraft comes into view of the police, one of them pulls out a rocket launcher (apparently standard issue for the LAPD) and fires it at the chopper. Whereupon it crashes to the ground and explodes.

Horrendous. It looks like the shell of an actual helicopter is dropped on to the road (presumably from a crane). But once it hits the asphalt it disappears in an entirely unconvincing cloud of CGI. Risible.

It’s not often that you see a pilotless helicopter explode. Other examples can be seen in Piranha II: The Spawning and Angels & Demons.

Ice T has a small role in the film as a secret service agent whose only notable contribution to the film is yell: “Prepare for all surprises, assassination is not in my goddamn vocabulary!” Moments later, inevitably, he is bumped off.

That isn’t the end of the indignity for the rapper-turned-actor. As one of the ‘star’ turns in the film, his name appears on the cover of the DVD above a picture of someone who very clearly isn’t Ice T.

Apparently, whichever jobsworth lazily photo-shopped the cover design used a picture of the only other black man in the cast.

It’s an ugly mistake to be sure, but a perfect metaphor for the film. When you can’t even get the cover details right, what hope is there for the actual movie? So take Exploding Helicopter’s advice. If you’re tempted to watch this movie, try the Alternate instead – and just stick to Die Hard.

Posted by Exploding Helicopter at 08:24