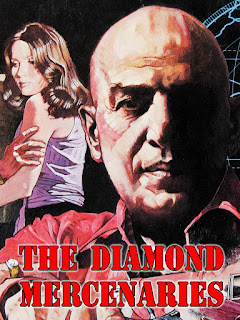 The Seventies were a golden era for heist movies. Back then, filmmakers spoiled us with a myriad of variations on the traditional stick-em-up. We had Sam Peckinpah’s gritty The Getaway, George Roy Hill’s stylish caper The Sting, and Sidney Lumet’s moving Dog Day Afternoon.

But naturally, Exploding Helicopter is not reviewing one of those illustrious efforts. Instead, you’ll be getting the lowdown on The Diamond Mercenaries (1976) – almost the very definition of a run-of-the-mill hack-job – which was directed by cinematic journeyman, Val Guest.

The reason for this is fairly simple. It appears that there are good heist movies, and then heist movies with exploding helicopters in them. Like a Great Dane and a Chihuahua, the two entities don’t tend to mix.

A team of mercenaries plot an audacious raid on a seemingly impregnable diamond mine. But when rumours of the heist reach the owners, they bring in their top security man to foil the raid.

The stage is then set for a battle of wits. Can our merry band of thieves pull off their daring robbery? Or will the sly security chief outfox his prey before they steal the gems?

To find out, you’ll either have to watch the film or keeping reading this review. (Assuredly, both will be a terrible waste of your time, but at least reading this drivel won’t take you an hour and half.)

Heading the cast – in more ways than one – is the late, great, extremely follically-challenged Telly Savalas, a monumental TV star in the Seventies. (Heck, he was even named after the television.) Known universally for his role as the cue-ball-headed cop, Kojak, Big Tel here plays the security chief tasked with preventing the robbery.

It’s a tricky job, and not made any easier by having to wear an eye-melting selection of garish Seventies shirts. (Exploding Helicopter’s particular favourite is a hallucinogenic emerald green number with, yes, owls splattered all over it.)

Starring alongside our top baldy sex symbol is Sixties counter-culture icon, Peter Fonda, who features as a diamond mine employee charged with infiltrating the gang. The Easy Rider and LSD enthusiast cruises through the film with a blissed-out cool that suggests he might have smuggled a healthy-sized collection of happy pills onto the set. Or perhaps he just stared at Telly’s shirt for too long.

You’ll likely notice a couple of other famous faces among the criminal clique, some more welcome than others. Christopher Lee – everyone’s favourite blood-sucking vampire – pops up as a poetry-reading British soldier gone bad.

And speaking of creepy men who stick sharp objects into young women: everyone’s least favourite acquitted murderer, OJ Simpson, also squeezes in a guest appearance. The “Juice” is famously a very poor actor (he struggled mightily with the role of ‘innocent person’ at his own trial, for example) and he’s on typically bobbins form here. Bleurgh.

A theft of your time

Heist movies have been reliably entertaining audiences for decades, by following a very simple three-point formula.

First, show the team – generally a ragbag assortment of misfits – being brought together. Second, outline the painstaking preparations for the big ‘job’. And third, deliver an exciting finale where the robbery is carried out in all its elaborate detail.

Really, it’s a fool-proof plan. Or at least, it was until director Val Guest started tinkering with it.

So, instead of seeing the gang recruited, the criminal coven in The Diamond Mercenaries comes ready-formed. And their preparations for the job? That involves nothing more than some desultory leaning over a table, looking at a giant map. Compelling drama, this is not.

Mercifully, things do improve once the heist begins – or more precisely, goes completely tits up. Once the raid is rumbled, the last half hour transforms into a veritable action bonanza.

The gang have to shoot their way out of the diamond mine, before making their getaway in a Jeep. This sets-up an exciting desert-set car chase, with each side trading gunfire as vehicles race across the sand dunes.

But this climactic surge of excitement is, frankly, too little too late. Ultimately, The Diamond Mercenaries is no 24-carat sparkler. It is a very dim gem, indeed. Perhaps they should have named it The Diamante Mercenaries.

All this brings us to what should be the crown jewel of every film: the exploding helicopter. This conflagration actually occurs at the start of the film, during a sequence designed to establish the formidable defences of the diamond mine.

What happens: a couple of criminals are attempting to sneak in, when their presence is detected. Natch, a helicopter (a Bell Jet Ranger, fact fans!) is despatched to investigate.

As the chopper flies overhead, one of the intruders fires a solitary rifle shot at it. And before you can say, “Surely a single small calibre bullet is never going to damage a helicopter…” POOF! The whole thing disappears so magically fast you’ll be looking for David Copperfield’s name in the end credits.

This singularly underwhelming helicopter explosion is a strong example of a phenomenon that regularly plagued films of this vintage: spontaneous combustion.

You’d think a vehicle robust enough to fly and carry multiple people would be able to absorb a reasonable amount of small-arms fire before being fatally damaged. And yet, during the Seventies, you basically only needed to sneeze in the general direction of a helicopter before it would erupt in flames. They really did seem to explode at the slightest provocation

Presumably, film audiences of that era were simply an impatient bunch and overly eager to get to the bit where everything blew up. And so filmmakers gave ‘em what they wanted. But looking back, maybe someone should have mentioned that anticipation is half the pleasure.

Obviously, nothing about the movie itself is interesting. But the cast and crew of this yarn do have a spookily high number of connections to the James Bond franchise.

Both Christopher Lee and Maud Adams appeared in The Man With The Golden Gun. Telly Savalas played 007’s cat stroking nemesis Blofeld in On Her Majesties’ Secret Service. And Val Guest was one of the many directors who worked on the Sixties Bond parody Casino Royale.

Eagle-eared listeners will also identify a further connection to the famous British spy series. That’s because the dulcet tones of Robert Rietty can be heard providing the voices for several of the supporting characters. Dubbed ‘the man with a thousand voices’, Rietty memorably voiced Emilio Largo in Thunderball, and Tiger Tanaka in You Only Live Twice, as well as many other minor characters throughout the series.

Review by: Jafo
Posted by Exploding Helicopter at 12:52