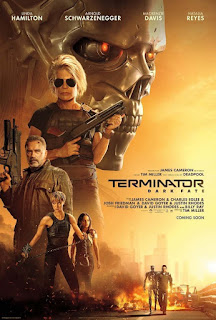 By this point, “I’ll be back” has started to sound less like a promise and more like a grim cinematic threat.

Imagine, for a moment, walking out of a screening of the original “Terminator” in 1984 and being told that the film’s stars would still be playing those action roles 35 years later.

That a waxen-faced, 72-year-old Arnie Schwarzenegger and a profoundly haggard Linda Hamilton (63) would still be hobbling around in biker leathers, toting over-sized guns and spouting inanities about ‘holes in der fabric of tiiime…’ You’d find the prospect more incredible than the movie you’d just seen.

And yet here we are. It’s 2019, and Arnie is back doing his shtick as everyone’s favourite T-100. To paraphrase Michel Biehn in the original film: “The Terminator franchise is out there. It can’t be bargained with, it can’t be reasoned with, and it absolutely will not stop until you are dead (bored of these endless sequels).”

The Case of the Missing Movies

You know how the Terminator movies often end with a knackered-looking robot being slowly lowered into a huge smelting vat? Well, that’s apparently what the makers of Dark Fate decided to do with T3, Salvation and Genisys.

With James Cameron back in the driving seat as producer, this new movie follows directly on from the last half-decent Terminator film – T2: Judgment Day – and unblushingly pretends that nearly three decades’ worth of increasingly confusing sequels simply never happened. (If only the poor audience was afforded the same luxury.)

But even with such radical surgery, the plot of this movie is still a mess – hurriedly tying up loose ends and conjuring up whole new story arcs with scraps of cranky exposition. It starts with a flashback in which annoying teen, John Connor – the original saviour of the world, remember – is casually killed by a CGI-young Arnie. (In other words, everything that was achieved in the first two movies was a complete waste of time.) The action then clunks over to Mexico, where a new ‘good’ Terminator and obligatory liquid-metal bad guy both arrive in search of the latest saviour, a feisty young auto-worker.

Naturally, within five minutes there’s a Terminator fight and car chase. Linda Hamilton turns up, armed with a massive bazooka and, even more worryingly for the viewer, yet more nigh-unlistenable exposition. Then they all go to visit Arnie, now living incognito as a curtain salesman called Carl. (Yes, you did just read that correctly.) The bad guy finds them again. There’s another fight. Then another, on a plane. Then it’s on to the obligatory climactic fisticuffs in a giant industrial setting. And by this point, the action has essentially morphed – Terminator liquid metal-style – back into the first two movies.

You’ve almost got to admire the studio’s unabashed intent to put on a karaoke-style tribute to the franchise’s glory days, but the result should be more coherent. Apparently, new director Tim Miller and the famously combustible Cameron had radically different ideas for the script and did not get along. Word is they essentially waged a Hollywood jihad on each other as they wrestled for creative control, and you can see the results in the lumpy storytelling and uneven tone.

However, the studio did manage to muster some innovation with its cast. Showing some serious post-#metoo savvy, they decided to feature three female leads. In theory, this was a good idea. The franchise has had more than its fair share of macho meatheads – Christian Bale, Sam Worthington, the abominable Jai Courtney – so switching chromosomes felt like a fresh and bold move. Unfortunately, all the main roles have been woefully underwritten and the actors themselves are largely terrible.

The ‘good’ Terminator – a genetically enhanced human, this time – is played by gangly-limbed tomboy, Mackenzie Davis, who is great at ass-kicking but otherwise seems totally lost, unsure whether to emote or act tough. Playing the chosen-one-who-mustn’t-be-killed, Hispanic actress Natalia Reyes alternately bleats and wails and gets angry, but all to no discernible purpose. Only Leathery Linda is able to instil her character with a bit of steely resolve, spitting out withering asides and giving everyone the stink-eye.

As always, Big Arnie’s performance seems stuck between acting like a robot and being the robotic actor that he really is. Gabriel Luna does manage to bring a chilling menace to his role as the new bad terminator, but when the actor being singled out for praise only speaks about 30 words in the whole movie and is basically a CGI-composite for 80 per cent of his scenes, that’s pretty telling.

Get to the action, for God’s sake…

Luckily, the film-makers seem to have realised what a load of complete bobbins their story and actors were, so opted to throw a boat-load of action at the screen – and the formula largely works.

Following an opening contretemps in a car factory, the film really gets going with a prolonged (and hugely destructive) giant lorry chase along a freeway. And while, post-Matrix, this kind of scene is becoming a little too familiar, there’s a lot of stunts-and-explosions creativity on display.

Later, the gang somehow find themselves locked up in an immigration holding facility, until Old Liquid Stabby Arms turns up and starts slicing and dicing his way through everybody. (It’s a wonder Trump hasn’t tried to hire him.)

From then on, it’s basically non-stop action. The extended dust-up inside an airborne C-130 is pretty rousing stuff, then it’s a hair-raising fall to earth in a Jeep attached to a wonky parachute, followed by two minutes avoiding soggy murder at the bottom of a lake and a chase across a dam. As mentioned, the climactic battle takes place in a ma-hoosive industrial plant handily equipped with plenty of Terminator-unfriendly materials. In short, it’s a full-on barrage of blows and bullets.

Exploding Helicopter has witnessed some truly appalling guff during its decade-long existence, but certain talky scenes here might well make the blog’s Mount Rushmore of Terrible Exposition. They are epically, finger-gnawngly bad. In one rambling early scene, where the main players are meant to be establishing themselves while holed up at a motel, you can actually see that chunks of dialogue have been overdubbed in post-production. And in the screening attended by Exploding Helicopter, a couple of Linda’s angry, gun-totin’ “Die, Metal Motherfucker!’ lines were met with open guffaws, which is never a promising sign.

But things truly fall through the floor when Arnold the Reformed T-100 starts waffling on about his wife and kid, and finding ‘ver beauty in hoo-man liiife’. It’s a monstrously misjudged scene, which the Teutonic Timber is not close to being able to deliver. You can almost picture Tim Miller sat behind the camera, head in hands, while Arnie rote-reads his moving soliliquy with all the delicacy and touch of a Speak-Your-Weight machine. It may well be the worst individual scene you’ll see on screen this year.

Two thirds of the way through the film, our heroes make their way to a military base to collect an incredibly powerful macguffin-I-mean-weapon, handily packaged in a case small enough to qualify as carry-on baggage with RyanAir. But wait: here comes Mr Liquid Metal in a helicopter! Arnie and pals board the tailgate of a lumbering C-130 military plane, and as it takes off they shoot at the pursuing chopper. The evil terminator leaps from his damaged chopper on to the tailgate of the plane, eager for some metallic mayhem. Meanwhile, the now pilotless helicopter explodes, hitting the runway and rolling over multiple times.

As you might expect in a movie that cost $185 million, everything looks fairly realistic and exciting. But there’s so much other stuff going on during this sequence – speeding vehicles, falling masonry, speeding terminators – that not enough time is devoted to relishing the true glory of the helicopter explosion.

Terminator: Dark Fate was originally planned as the first offering in a new trilogy. But the cataclysmic box office showing (even the famously undiscerning Chinese audience, so often the saviour of mediocre Hollywood movies, has turned its collective nose up at it) means that it may finally be time for Arnie to say Hasta le Vista, Baby.
Posted by Exploding Helicopter at 09:17