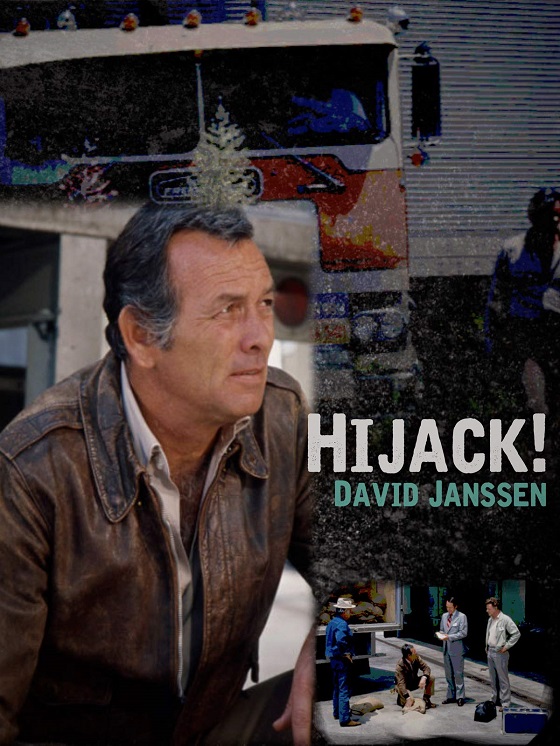 “Breaker, breaker, this is Bulldog headin’ South on old Double Nickel. Anyone out there got their ears on?”

Ah, the Seventies! When sideburns were long, trousers flared, and the world couldn’t get enough of truck drivers.

It’s true. During the decade, driving a vehicle for a living implausibly became the epitome of cool. Cinemas were gridlocked with films such as Smokey and the Bandit, Breaker! Breaker! and Convoy. Radios blared with the twangy sound of ‘truck-driving country’. And millions of people inexplicably tried to decode the mysteries of truckers’ CB radio slang.

Trying to explain such a strange moment in human culture is beyond the purview of this humble website. So instead, let’s ‘break 1-9’ and remain ‘cool on the stool’ to review Hijack! (1973). (And no, Exploding Helicopter doesn’t know what any of that means either).

Two truck drivers are hired to transport an obligatory ‘mysterious cargo’ across the country. They’re told it’s a top-secret job on behalf of the government, and for reasons of security they can’t be told the contents of their load.

At first they’re reluctant to take on the job, until they see the big bucks on offer. But they quickly (and predictably) come to rue the decision. To absolutely nobody’s surprise, a ruthless gang of villains – intent on stealing their mysterious cargo – starts giving chase as soon as they’re ‘ten-four, good buddy’ing down the freeway.

Can our heroes of highway haulage safely complete their risky run? Will the baddies succeed in their fiendish plans? Do viewers have the slightest hope of understanding a fifth of the CB-flavoured gobbledygook being spouted throughout? Probably not.

In the film’s proverbial driving seat is TV legend, David Janssen. The passing years and the actor’s premature death make it easy to forget what a huge star he was during the Sixties and Seventies. His trademark show – The Fugitive – was a colossal hit, pulling in a mind-boggling 72% of the American population for its climatic episode, a now unimaginable figure.

It’s worth noting that poor Janssen, a raging alcoholic and heavy smoker, was just 42 when he made this movie but looked a good 15 years older. His 27-year-old romantic interest Lee Purcell meanwhile, scarcely looked out of her teens, which lends a distinctly queasy and implausible flavour to their interactions.

Exploding Helicopter is going to cut to the chase with this review: Hijack! is not a very good film.

What promises to be a high-octane thriller, filled with burning rubber and roaring engines, in fact turns out to be a pedestrian drama that never gets out of first gear. Despite a brief 75-minute run-time, it still manages to spin its wheels through several torpor-inducing sections. And it’s so blandly staged that you wonder if the director fell asleep at the wheel.

The two films share an almost identical premise (one features a truck pursuing a car, the other a car pursuing a truck), and both featured a big television star (David Janssen vs Dennis Weaver). But while Duel is now considered a minor classic, Hijack! is rightly all but forgotten. That’s probably because a young Steven Spielberg directed Duel, while Hijack! was helmed by a TV hack, Leonard Horn, who churned out Sixties genre fodder such as Mission: Impossible and Voyage to the Bottom of the Sea. Or in this case, Voyage to the Bottom of the Barrel.

Still, the film does have some high points. The villains’ wardrobe is fabulous. Their leader – a thick-set, middle aged man – wears an electric pea-green suit that even Elvis in his Las Vegas, coke-snorting and crotch-thrusting heyday would’ve baulked at.

Not to be outdone, his top henchman sports a pair of trousers featuring an eye-bleedingly complex pattern of purples and mauves (perhaps a vain attempt to distract you from the fact he’s as bald as a coot). Clearly, these master criminals were not particularly concerned about remaining incognito.

Having spent so much time stuck on the highways and byways of Texas, the movie takes a pleasing aerial turn at its climax.

Following several failed attempts to stop Janssen, the villains take to a helicopter to stop the troublesome trucker.

An onboard gunman fires at the lorry with a machinegun, peppering the windshield with bullets. As the vehicle grinds to a halt, it appears that they’ve finally got their man. The helicopter lands so the villains can seize their prize. But wait: Janssen’s not dead! He’s just been lying doggo.

He shifts the truck into gear and rams the parked whirlybird, which instantly explodes. The lorry roars away badly dented, on-fire and with Janssen looking badly shaken by his ordeal – or perhaps just worrying about his no claims bonus.

It’s often mentioned on this blog that helicopters in Seventies movies were remarkably combustible – the slightest graze could have them erupting into a fireball. And so it is here. While the truck gives the chopper a fair old shunt, there’s no earthly reason for it to violently explode.

Mustn’t grumble though, because it’s not every day you get to see a helicopter blow up after a vehicular game of British Bulldog.

The chopper fireball in Hijack! is unusual, but not unique. Chuck Norris’ trucker tale, Breaker! Breaker!, also sees a is destroyed in similar fashion.

Despite being a small-screen star, David Janssen has appeared in a surprising number of films with an exploding helicopter. Check out his work in The Green Berets, Birds Of Prey and High Ice.

Review by: Jafo
Posted by Exploding Helicopter at 15:09