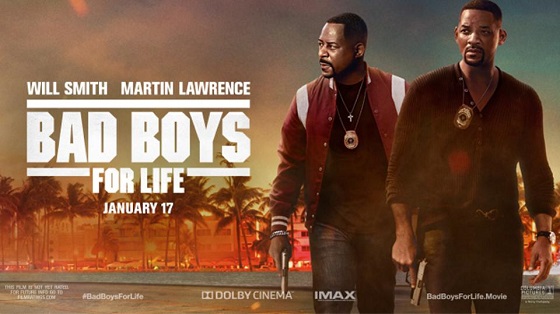 That’s right: for life. Or maybe watching this movie just seemed that long.

After a hiatus of 17 years, the ageing Miami cop duo – stretching the word ‘boy’ to its very outermost limits – bring their franchise creaking along for a third instalment that looks every bit as bloated and weather-worn as its stars.

This time, a wronged criminal is out for revenge. Will Smith is out to prove he’s still got it. And Martin Lawrence, by the look of him, has mostly been out for dinner. Of course, there’s the usual crash, bang and pyrotechnic wallop, and a supporting crew of millennial police moppets for eye-candy purposes.

But clearly, no-one was asking for this movie, so why are we here? With its crashing pratfalls, shouty jokes and swaggering self-confidence, it resembles nothing more than a drunk, uninvited guest at a party. And for Exploding Helicopter, it was just about as welcome.

Years ago, detective Mike Lowrey (Smith) busted a Mexican drug lord, who later died in prison. Now his villainous widow has been sprung from clink by her equally violent son, and they’re both bent on revenge.

Early on, the young tyke shoots Smith point blank in the chest three times. Certain death, surely? But no: following a few montage scenes of fellow cop Marcus Burnett (a king-sized Lawrence) tearfully wobbling his jowls beside his partner’s hospital bed, the not-so-Fresh Prince is apparently good as new.

Initially, Lawrence refuses to join Smith in hunting down the baddies, until they also kill the pair’s police captain. Only then – and Exploding Helicopter only hopes you’re sitting down for this next revelation – he agrees to team up one last time.

Joined by an incredibly hot young police crew who, like, use computers and stuff, they hunt down the evil Mexicans via a predictable cavalcade of car chases, punch-ups, weak puns and face-to-face sub-machine gun battles in which literally nobody gets shot. (Hey, there’s that ‘15’ certificate to think about here…) Then it all culminates in a Mexico City showdown.

Someone once observed that, by the final season of Baywatch, David Hasselhoff had the biggest breasts on the show. It’s not a kind line, but it does underscore a valid point – old actors replaying their younger roles is not generally a good look.

Who could forget a corseted and bewigged William Shatner in the Star Trek movie series? Or the supposedly immortal Christopher Lambert growing greyer and jowlier throughout the Highlander series? And in last year’s Last Blood, Sly Stallone, largely filmed skulking around subterranean tunnels, looked like nothing more than a freshly embalmed Egyptian mummy.

So let’s not forget, the ‘boys’ in question here are Will Smith (51) and 54-year-old Martin Lawrence. At least Smith, blessed with that Tom-Cruise-style steely self-discipline common among deeply weird Scientologists, still looks in prime condition.

Lawrence however, all wattles and artfully cut dark clothes trying to hide his pot belly, appears to have enjoyed every one of his five-plus decades. Exploding Helicopter is not sure how many dollars he got paid for this movie, but he’s apparently storing them in his cheeks.

However, the real major crime in this movie is how Joe Pantoliano, an effortlessly charismatic actor who was unmissable throughout two seasons of The Sopranos, is tasked with playing a lazy blend of Angry Police Captain™ and Proud Paternal Figure (“He’s like a son to me”).  Now, that’s criminal.

Ah yes, the millennials. Remember how The Expendables 3 added a buff, young supporting crew to the mix, so we wouldn’t have to spend two hours staring at a bunch of septuagenarians trying to hold their stomachs in? This movie does the same, sprinkling in a deeply uninteresting quartet of what we suppose should technically be called ‘characters’.

There’s a saucy leaderene to smoulder at Smith, a cocky young rebel to bristle against him, a musclebound hunk who – get this! – is a bit of a nerd, and a fit young woman who, er, has an interesting haircut. It comes to something when you’re left complaining that a movie lacks the nuance of Stallone’s later work, but this is where we find ourselves.

The opposite of chemistry

This Bad Boys series makes much of the supposed schtick between Smith and Lawrence, but watching the pair together is utterly wearying. All they do is shout banalities and clichés at each other, as if the booming volume and simple ‘bro’-ness of it all will obscure any lack of wit.

With Lawrence, in particular, almost every line he bellows is a clunking piece of exposition or plot point: Hey, best buddy. Remember that time you were working that case and…. It’s pretty artless stuff.

Also, for two friends who have supposedly been inseparable since childhood, they often sound bemused to hear even the most rudimentary facts about each other. At one point, Lawrence learns that his brother from another mother once spent almost a year working deep undercover for a Mexican drug cartel. What: he didn’t notice at the time?

Admittedly, action movies are not generally big on character – and nobody’s expecting Kramer vs Kramer here. But the writing is deeply shoddy even by base, generic standards.

The trouble with Mexicans

It’s worth noting that, while American movies appear terribly woke these days, Mexicans remain the last minority group that it’s still kind of okay to go full Jim Davidson-racist on, particularly in shoot-em-up yarns like this one. Thus, the drug lord’s widow is more a demented, murderous pastiche than a real person, and – get this – is also rumoured to be an actual witch.

Perpetually stuck in either hissy whisper or screeching mode, she’s pure pantomime. In characterisation terms, it’s the equivalent of portraying a Native-American woman in face-paint and making “Woo! Woo!” noises while tapping her mouth and dancing round a fire.

It’s a bizarre phenomenon, particularly given the spending power of the US’ native Hispanic population, but just seems to be one of those things – like the black character dying first in every horror flick.

So, to the final showdown in a ruined building in Mexico City. It is, natch, a dark and stormy evening. (Such conditions are famously CGI-friendly.) And let’s cut to the quick here: the building handily contains the kind of glass roof and huge central atrium that would be perfect for a crashing helicopter to slowly crash-spin down, almost hitting all the main characters along the way.

So, what do you think happens? After much punching, kicking, shooting and chasing (with nary a bruise visible on the main characters), a chopper heads in to pick up the widow and Lawrence shoots the pilot. The whirlybird comes careering in through the roof and spirals downwards to the ground, where it briefly lies in state before bursting into flames.

Let’s look, shall we? Chopper implausibly brought down by protagonist with small firearm on a roof. Check. Comes crashing down very, very slowly, usefully eating up camera time. Check. Almost hits every major character on the way down. Check. Comes to a whirring halt inches away from protagonist. Check. Eruption of sudden CGI fireball. Check.

Recognise the scraggly-looking emcee in the wedding scene of Lawrence’s screen daughter, the one looking like the kind of ageing surfer who wouldn’t be permitted within 100 metres of a school? That’s Michael Bay, the famously long-winded and pyrotechnic director of the first two Bad Boys movies.
Posted by Exploding Helicopter at 20:55

Email ThisBlogThis!Share to TwitterShare to FacebookShare to Pinterest
Labels: Review by: Chopper, Will Smith