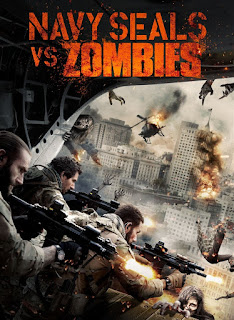 In hindsight, you do wonder: why did no one think of it sooner?

After countless variants on the ‘vs Zombies’ formula – Vampires vs Zombies, Cowboys vs Zombies, Cockneys vs Zombies, to name just a few – you’d be forgiven for thinking ghoulish-minded filmmakers were running out of groups to pit against the undead.

So thoroughly had the zombie barrel been scraped that 2015 even saw the release of Milfs vs Zombies, which seemed almost wilfully terrible. (Although it did have a glorious tagline: ‘They picked the wrong moms to fuck with’.)

However, in their haste to find ever weirder opponents for the undead, it appears many directors overlooked one screamingly obvious group: Navy Seals.

Think about it. If you want to guarantee a cinematic slaughterhouse of wholesale violence, what could be better than uncoiling the famously beserk and trigger-happy cream of the American military? These maniacs tot up triple-digit fatalities on peacekeeping missions, so one can only imagine the bedlam when they’re actually authorised to unleash hell with extreme prejudice.

And should the audience, numbed by all the “Hoo-ra!” histrionics and patriotic flag-waving, end up actively siding with the zombies – well, who cares? Splatter is still guaranteed.

A team of Navy Seals is sent to rescue the Vice President when he becomes trapped in Louisiana, which is overrun by a newly unleashed zombie horde.

Admittedly, there is a subplot that involves locating a scientist who might have a vaccine. But that’s basically just an excuse to unleash another round of headshots and limb-chomping.

So if you like your zombie movies with a side order of satire, subtext or social critique, maybe head over to George Romero’s Dawn of the Dead. This movie, much like its antagonists, is totally braindead.

If you hadn’t already guessed – you saw the title, right? - this is a low budget affair. Accordingly, the calibre of the acting talent fits snugly with the bargain basement quality of the script and overall production.

What star power there is comes courtesy of VHS-era action legend Michael Dudikoff (from the American Ninja series), who here plays a grizzled General masterminding the rescue operation.

This film marked a comeback for Mikey Duds after he retired from the movie industry in the early Noughties – or more accurately, was retired by the industry.

Yet fans eager to witness their former hero in action once again will be disappointed. Not because he isn't given a sizeable amount of screen-time. Or that he's lazily phoning-in his performance. No, the problem is you literally can’t see him. Mysteriously, all his scenes take place in a control room so dimly lit you’ll wonder if there was a mid-shoot power cut. What is going on?

The answer may lie in those aforementioned budgetary constraints. After all, the response to this rapidly spreading zombie pandemic is apparently being managed by two – count ‘em – blokes standing in a small and distinctly wonky-looking ‘nerve centre’, with walls that look like they might topple over if somebody coughs too enthusiastically. So maybe it made sense to keep the lights down.

Night of the Living Clichés

Readers who’ve made it this far (and thanks, both of you) will doubtless have deduced that Navy Seals vs Zombies (2015) is not great.

The ‘characters’ – if we can call them that – come from the hoariest of genre clichés. There’s a rookie Seal with a pregnant gal back home; a survivor nervously hiding a soon-to-be-fatal zombie bite. And most tiresomely of all, there’s a peppy journalist jeopardising everyone’s safety trying to ‘get the story out’.

(Literally the only bearable thing about this character is that he does finally get his ‘scoop’, when a marauding zombie scoops his innards out.)

Still, the film does deliver in one surprising way: those are actual Navy Seals you’re watching.

It’s true. Half the soldiers dropped in to save the Veep are real-life former Navy Seals – and boy, do they look their part. Barrel-chested and bushy-bearded, they have an effortless, man-of-action authenticity that both physically and metaphorically dwarves the lisping thesps playing dress-up alongside them. (“What’s my motivation for holding this gun?”)

But even these grizzled toughs, while adding verisimilitude, ultimately add to the problem. Because clearly, the price for securing the services of America’s finest was some thudding script-doctoring by the Navy. (Hollywood fact: The US Armed Services routinely pimps out its boys and hardware to film productions, but only in exchange for turning said movies into jingoistic recruiting ads.)

And so it’s no surprise when one character bleats, “Hey, you’re Navy Seals! I love you guys!” in a no-way-believable manner. Or when another, apropos of nothing, suddenly launches into a prolonged paean to military bravery.

However, the syrupy shit really hits the fan when one soldier becomes trapped. Before making a heroic last stand, he records a defiant final phone message that’s so filled with “honor”, ‘Gawd”, “freedom” and the American flag, it’s a wonder the zombies didn’t shuffle away in embarrassment.

Thank you for your service. Now pass the sick bag.

After locating the Vice President, the Seals call in a helicopter so they can ‘exfil the package’. (Warning: the movie is awash with such military-speak guff.)

He’s loaded on to the chopper along with some other survivors, including (natch) the one with the hidden zombie bite.

After taking off, the whirlybird suddenly begins to fly haphazardly, before disappearing behind some buildings. There’s the sound of a crash and a poorly rendered CGI fireball flickers up.

The viewer, seemingly the last thing on the director’s mind, sees all this from a distance –so we are left to assume that the passenger ‘turned’ and caused the resulting chaos-cum-crash.

Ordinarily, Exploding Helicopter becomes vexed when an explosion happens ‘off-camera’. But given the poverty of the special effects displayed elsewhere in this movie, less was probably more.

The surprisingly clever: “Home of the brave, land of the dead.”

Want someone else's opinion on this film? Then check out the review by our buddy DTV Connoisseur.
Posted by Exploding Helicopter at 11:31