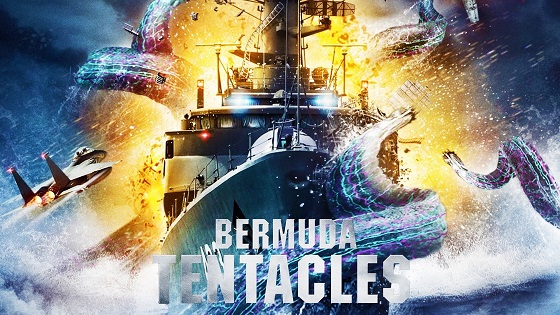 When a 2014 monster movie with a fair-sized budget keeps reminding you of a famously wonky and wooden Sixties sci-fi TV series, you know it’s in trouble. But in so many ways – the hammy acting, the risible effects, the disposable extras – this movie just reeks of the original Star Trek series.

That might not be so bad, if Bermuda Tentacles (2014) had any charm or character. But whereas Captain Kirk’s old sci-fi classic has gradually aged into beloved status, the only final frontier this new piece of tripe looks likely to surpass is the audience’s patience.

Even worse, once your mind boldly goes to the Star Trek comparison, you simply can’t shake the association out of your head. As a noted scientific authority once put it: Ye cannae change the laws of physics.

Air Force One hits a giant storm and crash lands in – wait for it – the Bermuda Triangle. And thus the viewer is thrown headlong into one of the biggest mysteries of modern times: why can’t the Presidential plane ever get from A to B intact in a Hollywood movie?

Onscreen at least, this supposedly failsafe and gigantic piece of kit seems unable to leave the tarmac without getting shot down (White House Down), hijacked (Air Force One), hijacked again (Escape From New York) or shot down again (Big Game). It’s a wonder any real-life President is willing to even go near the thing.

As Air Force Gone struggles against the raging elements, the President is flung into an escape pod which – movie countdown alert! – only has 12 hours of oxygen. (Hmm, wonder if that will become relevant in a hackneyed kind of ‘race against time’ scenario later on..?) Within minutes, the American Navy is despatched to rescue POTUS. But when they sail into the infamous Bermuda waters, a mysterious, be-tentacled alien lifeform is waiting.

She’ll be back… The only instantly recognisable star here is Linda Hamilton, Big Arnie’s frenemy from the Terminator series. She plays a gruff Admiral, growling and barking orders at everyone within earshot. And to her credit, Leathery Linda does seem genuinely pissed off – but that’s probably less about a commitment to the role and more a genuine anger that her once stellar career has come to appearing in this kind of dreck.

The rest of the cast seems to have escaped from one of those terrible ‘I Love the Nineties’ shows on Channel 5. First, here’s R’n’B also-ran, Mya, whose solitary chart hit a mere 22 years ago you may dimly remember, if you’re her mum. Daytime soap opera beefcake Trevor Donovan (Days Of Our Lives / 90210) pads out an underwhelming cast with his deeply wooden presence.

And making Mya look like a Johnny Come Lately, Ricco Ross – aka Private Frost from Aliens (1986) – takes some time from his busy schedule signing photographs at science fiction conventions to lend a slice of ham to the proceedings.

This is ostensibly a modern, ocean-based sci-fi movie, but as soon as the action starts, the Star Trek comparisons start coming in thick and tractor beam fast. For one thing, the sets are woefully shaky. And the characters spout so much pseudo-scientific guff (“I want deep sub-surface detection for massive organic life”) you feel it’s only a matter of time before someone broaches the topic of dilethium crystals.

Naturally, there’s a Trek-style power failure. And as some hapless minion blurts tekky gobbledegook about rerouting the systems, you’re almost willing him to just shout “I've giv'n her all she's got captain, an' I canna give her no more!”

If all this sounds a bit much, there’s more to come. The Bermuda crew also reprise one of Star trek’s favourite tropes: the wobbly camera scene. You remember how during Klingon ‘attacks’ on the Enterprise, Captain Kirk and the rest of the crew would gamely throw themselves around while the cameraman wobbled the camera? If you enjoyed such scenes, you’ll be wiping a nostalgic tear as our heroes’ awkwardly lurch around during the submarine’s descent to the ocean floor.

And of course, no cinematic Trek tribute would be complete without a nod to the original show’s ‘red shirt’ phenomenon. On numerous occasions here, the film’s ‘stars’ (and we use that word very advisedly) set out to investigate some danger with a couple of nameless Navy Seals in tow, who may as well have ‘Dead in Two Minutes’ tattooed on their foreheads.

The fleet searching for the missing President comes under attack from the aquatic threat. One of the titular tentacles flails around in the air until it hits a Navy helicopter that’s flying overhead.

The blow knocks the helicopter – a Sikorsky CH-53E Super Stallion, fact fans – into another chopper that’s flying alongside. That means the original whirlybird spins out of control onto the deck of the warship, where it explodes.

Given the shoddiness of much of the film, the explosion isn’t too bad. Though wisely, the director doesn’t linger too long on his handiwork.

Not, really. We’ve seen tentacled monsters swat helicopters to their deaths in both Hellboy II: The Golden Army and in Skyline.

Ricco Ross’ performance is so forgettable that people keep forgetting his name. His character is interchangeably referred to as Chief Phillips and Captain Phillips, until Mya shows up and calls him Sergeant Phillips. That’s two demotions in an hour.
Posted by Exploding Helicopter at 14:08