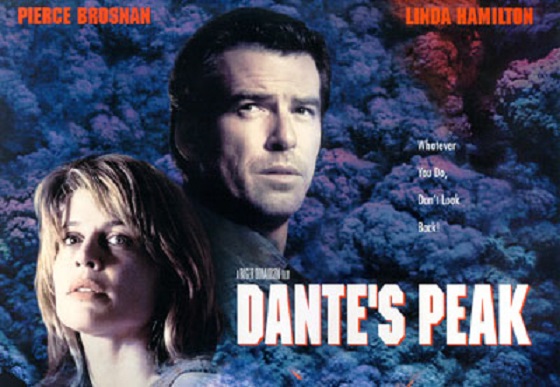 When you think about it, disaster movies are rather like volcanoes. The genre lies dormant for decades before violently and unexpectedly erupting.
The Seventies, of course, saw the most famous eruption of disaster films. But after a 10-year run of films with bloated plots and casts stuffed with past-it actors (think Earthquake or Meteor), the genre went quiet.
More recently, efforts to revive films featuring world-ending calamity have hampered by movie-makers desire to show off the CGI wizardry they now have at their disposal.
Neatly avoiding all these pitfalls is Dante’s Peak, which deftly combines impressive visual effects, a believable plot, and a credible cast. And while there are genre clichés aplenty, the with which director Roger Donaldson keeps the film rattling along means they're never around long enough to irritate you. All told, Dante's Peak (1997) one of the most enjoyable disaster movies I’ve watched.
Pierce Brosnan plays volcanologist Harry Dalton. He’s sent to the small town of Dante’s Peak to investigate some peculiar seismic readings. Brozzer warns that the dormant volcano is about to explode and calls for the town to be evacuated. But his sceptical boss fails to heed the warning until it is too late. Just as the town are finally considering the possibility of a precautionary evacuation the volcano explodes panicking the townspeople.
A dastardly helicopter pilot, who earlier in the film had demanded a pay bonus to rescue an injured man, offers to fly wealthy residents out the town for a nice juicy cash sum. Brosnan’s boss tries to warn the pilot of the dangers of flying with the skies filled with volcanic ash, but is ignored.
The mercenary helicopter pilot takes off with the towns well-to-do citizens, but quickly falls prey to the predicted engine problems. Meanwhile Brosnan is desperately racing up the mountain in a truck to save the children of the town's Mayor.
Out of nowhere the helicopter appears in front of his truck and crashes nose first into the ground before catapulting over the vehicle in a miraculous close shave. The chopper somersaults forward and crashes into a nearby building before exploding.
Artistic merit
The exploding helicopter neatly provides a deserved death for the treacherous pilot whilst providing Brosnan with another peril to face. The explosion is well executed but it’s just one big explosion and you can’t see any of the helicopter within it. Full marks for having the helicopter bounce over the truck. Most unexpected.
Exploding helicopter innovation
First known helicopter to be downed by an exploding volcano. I’ve also never seen a crashing helicopter bounce on impact with the ground. Perhaps it landed on an unseen trampoline.
Do passengers survive?
No. The pilot was marked for death earlier in the film when he started renegotiating his pay rates to rescue an injured man. The passengers were all rich making it acceptable for them to meet a fiery chopper death.
Positives
We learned that helicopter apparently can bounce on impact with the earth, opening up the prospect that’s possible to survive crashing into the ground.
Negatives
There’s no point surviving the crash into the ground if you finally land on a combustible building.
Favourite quote
“Send in the chopper right now!”
Interesting fact
Michael Douglas was originally slated to play Brosnan’s character.
Posted by Exploding Helicopter at 19:02