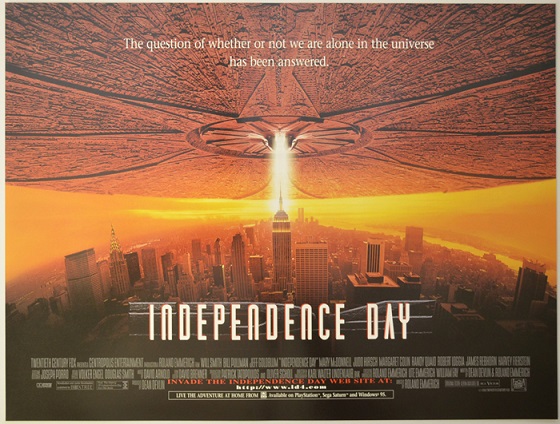 Will Smith and Jeff Goldblum mug their way through this overblown shambles as they try to save Earth from an alien invasion.
Director and co-writer Roland Emmerich an extravagant 13 months on physical production and just four paltry weeks on the script. The result is as you’d expect: laughable dialogue, cardboard stereotypes, and a plot that’s sacrificed for special effects overload.
Top it all off with a cheesy ending and a tone of cloying sentimentality and you’ll be praying for aliens to invade you anally if it stop this assault on your intelligence.
And yet, the film does deliver on the exploding helicopter front. No fewer than four of the bad boys are blown up in the name of "entertainment".
In a misguided attempt to welcome the alien invaders to the planet General Gray (a sleepwalking Robert Loggia) sends up a "welcome wagon" of three Sikorsky S-64s. As the helicopters approach the saucer, the spaceship fires a powerful laser blast that destroys each helicopter in with a minimum of fuss.
Later in the film, the First Lady (Mary McDonnell) flees the White House in a presidential chopper just as the aliens attack. The White House explodes (in what has become an iconic shot) and the helicopter is engulfed in the all-encompassing explosion.
Artistic merit
This is a big budget movie so the CGI explosions look pretty realistic but lack the gritty satisfaction that only a real-life fireball can deliver. Shots of the burning debris as the helicopter wreckage plummets to the ground are a nice touch though.
Number of exploding helicopters
Four
Exploding helicopter innovation
A hattrick of helicopters being destroyed by alien laser fire is not something you see every day. Sadly, it's not as impressive as you might think.
Do passengers survive?
The three pilots in the ‘welcome wagon’ meet-and-greet team are instantly turned to toast. Amazingly the First Lady survives the mother of all explosions only to die later in the film from internal bleeding.
Positives
Emmerich might not know how to make a decent movie, but he knows how to blow things up with the aid of CGI. The White House scene which went some way to win the Best Visual Effects Oscar still looks pretty good 15 years later and the wall of flame that destroys the Presidential chopper is about as eyebrow singeing as it gets.
Negatives
How on earth does the First Lady survive the impact of an explosion equivalent to that of a nuclear bomb and the subsequent crash to emerge with a few scratches and some internal bleeding. In the real world the fireball would have bypassed the need for the President to cremate her.
Favourite quote
A news announcer warns viewers against interacting with the aliens: "Do not fire your guns at the spacecraft. You might inadvertently start an interstellar war"
Posted by Exploding Helicopter at 07:01