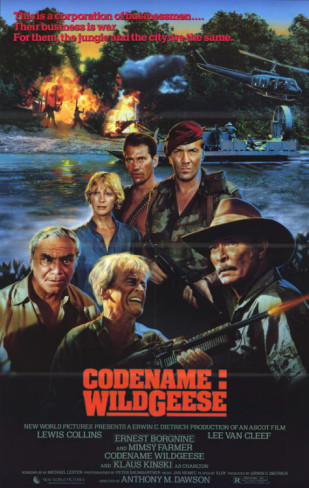 Yee gods. The things we do for this website. Having slogged our way through the other two films in this loose trilogy the completist in us felt duty bound to watch Codename: Wild Geese (1984) in the hope of another exploding helicopter.

Despite the title, Codename: Wild Geese is not related to The Wild Geese or it’s sequel, erm Wild Geese II. It is in fact the first of three action films, all starring Lewis Collins and directed by Antonio Margheriti, that were knocked out in rapid order in the mid 80s. (The previously reviewed Commando Leopard (1985) and The Commander (1988) complete the triptych).

Collins plays Captain Robin Wesley. He’s hired to lead a team of mercenaries into the Thai jungle to destroy an opium factory run by a corrupt army General.

Alongside Collins we have veteran character actor Ernest Borgnine as devious DEA agent and legendary German wild man Klaus Kinski as the enforcer for a shadowy Hong Kong businessman.
But before the mission can start, Wesley must find a pilot. He uses the Government connection to arrange the release of 'China' (Lee Van Cleef) an ace pilot.

The group head off up river into the jungle. They meet up with some rebels who lead them to the an army base where they plan to steal a helicopter they need to complete their mission.

After pinching the chopper, they fly to the corrupt general's drug factory. They launch their attack and destroy the labs. However, the small squad hits some trouble and Van Cleef is forced to leave his helicopter to help a wounded colleague.

However, in a pointless but convenient plot twist, one of the rebels who has accompanied them on the raid is a double agent. He sneaks up on the helicopter and, using the butt of his rifle, smashes the helicopter's fuel tank.

He retreats a few yards and sets fire to the petrol before one of Wesley’s men, realising the betrayal, shoots the rebel dead. Too late though, the helicopter is consumed in a fireball. Looks like our heroes will have to walk their way out the jungle.

This is a poor helicopter explosion. The producers clearly couldn’t afford to actually blow a helicopter up, or even a realistic looking prop. Instead they set off some explosives which are clearly in front of the chopper.

When the smoke clears we can make out the tail end of a helicopter next to a burning fire. Quite where the rest of the helicopter has gone I don’t know. Maybe it evaporated?

Despite blowing up trains, bridges, laboratories, cars and trucks director Anthonio Margeriti never really expends any effort on blowing up helicopters in creative ways. It’s almost like he doesn’t think they’re worth the effort. How wrong can a man be?

There’s some good helicopter action at the end of the movie when Collins fixes a flame thrower on the runners of a requisitioned chopper. He then flies around the enemy’s jungle lair turning many of the villains to toast.

There’s also a good helicopter scene where Collins and the surviving members of his team are pinned down in a hanger with the helicopter they need to escape.

Kinski decides to use an old lorry to smash his way into the hanger driving it at doors to the building. Collins, knowing that the only chance of escape past the soldier outside will be to make a rapid exit from hanger, plants a box of grenades by the hanger doors.

With the helicopter revved up and ready to go he explodes the grenades destroying the doors to the hanger and allowing them to swoop out of the hanger just before the lorry smashes into the hanger and where the chopper was sat only moments before. It’s nice to see a bit of imagination used here.

The scene where the helicopter’s fuel tanks are bust open with the butt of a rifle were a surprise. I can’t say if this is accurate or not, but it’s hard to believe that any chopper’s fuselage is made out of metal as flimsy as baking foil.

And if Lewis Collins is supposed to be the bad ass mercenary that he is, would he really pin his entire escape plan on a helicopter that could be taken out with blowpipe?

“Are you ok?”
“We’re only screaming to scare them.”

The film co-stars Ernest Borgnine, an exploding helicopter legend for this work in the TV series Airwolf. Borgnine was 67 when he made this. Unbelievably, he is still a working actor today at the grand old age of 94, appearing last year in the film RED.

Still want more? Then read the review of the film by our buddies DTV Connoisseur or listen to our podcast episode on the film. Listen via iTunes, Sticher, Acast, Spotify or right here.

Posted by Exploding Helicopter at 21:07