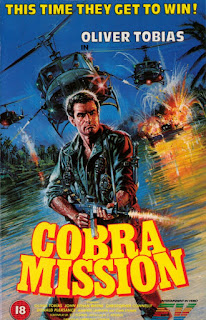 Cobra Mission (1986) is another of those films where a group of gung-ho Americans return to Vietnam to rescue prisoners of war. This short lived action movie sub-genre existed almost exclusively in the 1980s, and is perhaps best exemplified by Chuck Norris' Missing In Action series.

Cobra Mission, also known as Operation Nam, begins with a bunch of old Vietnam buddies kicking back at the wedding of Roger Carson’s (Christopher Connelly) daughter.

Roger and his buddies don’t care for the niceties of civilian life, preferring to swap ribald stories of nights out in Saigon. Roger’s stuck-up wife complains that their guests can hear their salty tales, prompting the gang to walk out of the wedding.

With nothing else to do, they look up their old commanding officer. They learn that he's been kicked out of the military for making waves about the existence of American POWs in Vietnam. Confronted with this shock revelation, the old comrades decide there’s only one thing to do: head immediately to Vietnam and bring the POWs home themselves. Huah!

One minute you're at a wedding, the next you're off to South Asia to lead an unsanctioned paramilitary operation against a sovereign nation. Well, the reception did look a little dull.

After sneaking into the country, the gang find the POWs with surprising ease. Bizarrely the prisoners aren't keen on being freed for reasons the plot doesn’t make clear. Nevertheless, our heroes and the POWs try to make their escape from Vietnam. However, along the way they meet heavy resistance and most of the POWs get killed off.

Finally, only one POW remains, and it looks like they’re all going to be killed when the Viet Cong finally corner them. But wait! Suddenly a US army helicopter flies into view with a high ranking Colonel onboard. He tells Roger and his buddies out he'll fly them all to safety, but only if they leave the POW. Taking him along would blow the conspiracy. Roger and his friends reluctantly board the chopper and the POW is taken off by the VC.

It’s a surprisingly downbeat ending, but it worked for me. It was nice to be thrown a curve ball by the plot when you're expecting a victorious ending for the heroes.

Anyway, to the key scene in the film. Our heroes are trying to escape with the POWs in a stolen truck when they find themselves pursued by a helicopter. They drive into an open field and circle round crazily trying to avoid the gunfire from the chopper. Finally, someone has the brain wave of firing back at the chopper with a machine gun. And the rest is exploding helicopter history.

In a word: lousy. The helicopter bursts into flame then plummets straight down like an express elevator. It disappears out of shot and we hear an explosion whilst the camera cuts back to our heroes in the truck. It's enraging. Just show the bloody thing exploding properly goddamnit!

Not sure it’s innovation but the helicopter catches fire like it’s been soaked in kerosene. You’d think a military helicopter would be able to sustain a certain amount of damage without combusting like a firework.

Cobra Mission is a European financed flick and produced by exploitation hack Erwin C Dietrich. The film stars the usual hotch-potch of actors to ensure marketability in the maximum possible countries.

On board for this is the wonderfully grizzled Christoper Connelly, veteran of exploitation flicks like (1990: The Bronx Warriors). Ethan Wayne, son of John, who enjoyed a short lived acting career of the back of his dad’s name. And in the way he relishes machine-gunning the Viet Cong he really does look like a chip of the old block.

It was also good to renew acquaintances with Manfred Lehmann again, who’s a veteran of Dietrich productions. Lehmann always has a twinkle in his eye and a rangy, worldly wise charm. Definitely the kind of guy you’d want to go to war with.

And Donald Pleasance appears in a brief cameo as a French priest who happens to keep a weapons arsenal in the crypt of his church.

The early part of the film might be too slow for some people’s tastes. However, the exposition is hilarious with clichéd plot points delivered with such gusto and conviction that I’m inclined to be forgiving.

“Forget about it man, it’s Vietnam.”

Manfred Lehmann is better known to German audiences as the voice artist for Bruce Willis and Dolph Lundgren.
Posted by Exploding Helicopter at 18:41