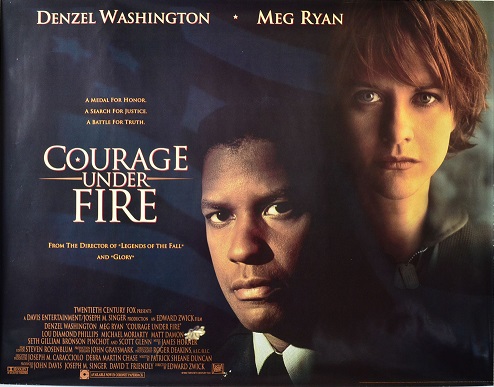 I once read Robert McKee’s Story, all about the structure and storytelling devices filmmakers typically use. I can’t remember much about it now, but I suspect Courage Under Fire (1996) is using every trick in the book. It’s one of those perfectly plotted films where everything just falls too neatly together.

So here we have Denzil Washington playing an army colonel who's been sidelined after a ‘friendly-fire’ incident where he accidentally killed his own soldiers. Safely away from the frontline, his new desk job is to investigate soldiers eligibility for medals.

In this role, Washington is asked to look at the case of a Gulf War helicopter pilot (Meg Ryan) who’s been nominated for the medal of honor. However, as Denzel digs into the circumstances, the seemingly open and shut story of heroism starts to unravel. It transpires that Meg Ryan may actually have been killed by ‘friendly-fire’. Oh, the poetic irony.

With the major story elements established, you don't need to be Nostradamus to know that exposing the truth about Meg Ryan's death will require Washington to reckon with his own guilt-wracked past.

Naturally, by the end of the film all the plot strands have been neatly tied in a pretty bow. Big Denzel apologises to the parents of the soldier he killed, reconciles with his family, while Meg Ryan’s daughter gets to collect her mother’s posthumous medal of honor in teary finale. Yuk.

But enough of this sentimental swill, what of the exploding helicopter action? Well, this occurs during a flashback to circumstances of Meg Ryan’s death.
We pick the action up with Meg Ryan's pilot flying a team of medics to rescue the survivors another downed helicopter. The ground troops are pinned down by the wreckage of their chopper by advancing Iraqi soldiers. The troops are supported by a tank who pops off a shell which hit’s the already wrecked chopper causing it to explode.

Director Ed Zwick should get kudos for a clever little double bluff here. You think you’ve missed your chance of an exploding helicopter, but actually he’s thrown you a fake and blows the wreckage up in emphatic fashion. Nice.

Blowing up an already blown-up helicopter. I guess it makes retakes easier.

Yes. They already out of the helicopter when it blows up.

Lou Diamond Phillips has a meaty supporting role in the film. It’s always nice to see him on screen. Young Guns seemed like an important film when I was younger. I’ve obviously revised my opinion since then.

Scott Glenn plays a reporter investigating the cover-up of Denzil Washington’s ‘friendly-fire’ incident. He’s an immediately compelling screen presence with his lean, rangey, and craggy features. Sadly, he’s barely given anything to do here. A waste.

Apparently Matt Damon lost 40 pounds to play the role of one of the medics who survives the chopper crash. I’m not sure why he bothered. It’s hardly a key plot point. More fool him.

Still want more? Then check out the Exploding Helicopter podcast episode on Courage Under Fire. Download it on iTunes, Podomatic, YourListen, Stitcher, and Acast. Or listen right here.

Posted by Exploding Helicopter at 16:11