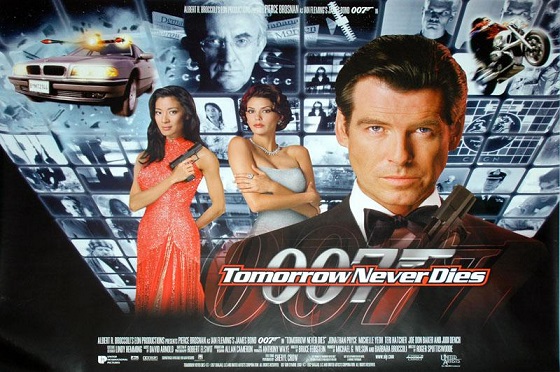 A James Bond film is much like a Christmas pudding. It contains a combination of ingredients that you just don't get elsewhere. Someone will always try to take over the world. A series of zany gadgets will be deployed in exotic locations. Impossibly beautiful women will fawn over 007, and there's always a strong possibility a helicopter may explode.

And, much like a Christmas pudding, you only ever get it once a year.

Those ingredients are mixed-up and served to us again in Tomorrow Never Dies (1997) - Pierce Brosnan’s second Bond outing after the hugely successful GoldenEye. Tantalisingly, the film opens with in an arms bazaar in mountains bordering Russia.

I say tantalising because the impressive array of military aircraft on display suggests that the viewer might be about to witness one of the earliest helicopter explosions in celluloid history.

Alas, it's not to be. Whilst a helicopter lurks enticingly in view, we never get to see it explode - even when the entire mountain top is vaporised whilst Bond escapes in a fighter plane.

This begins a convoluted plot in which a media baron attempts to to boost his fortune by secretly triggering World War III. It's curious plan at best. Especially as Jonathan Pryce’s Elliot Carver seems not to have considered the fact that survivors of a nuclear holocaust are unlikely to see reading a newspaper as much of a priority. No matter, this is Bond after all, so plots as thin as a sheet of newspaper are good enough to carry the film.

So, to the exploding helicopter action. This occurs after Bond teams up with Chinese agent Wai Lin, played by Michelle Yeoh. After escaping Carver's clutches, the pair jump off a skyscraper in central Saigon (this is Bond after all) and race through the city on a motorbike hotly pursued by some anonymous henchmen.

Eventually, they find themselves stuck on a busy street. The chasing chopper pitches forward, using its rotor blades to clear the street and rip through a couple of hundreds of market stalls like some kind of aerial garden strimmer. (It’s unclear why one of the henchmen doesn’t just lean out with his machine gun but as the director didn't trouble himself with this detail we won't either).

Our heroes take cover while the helicopter very slowly hits a a corrugated iron shack before immediately combusting as if coated in dynamite. We then cut to Brosnan casually taking a post-explosion shower with Yeoh. Well, at least she’s roughly his age.

After such an elaborate build up, including a stunt in which Yeoh climbs over Brosnan on a moving motorbike, the pay-off is quite disappointing. The chopper seems to explode at the slightest of touches, although the fireball is satisfyingly expensive looking.

Worst of all though, are the clearly visible crash test dummies sitting in the chopper as it goes up. You would think the budget could stretch to some models that don’t have hinges showing.

None at all. It feels as if a day’s shooting needed to be completed so rather than inject a tailspin or a prolonged and dramatic tumble from the air, the chopper just gently pokes a paper house with its nose. It’s all over in about three seconds.

The director should at least be applauded for injecting a helicopter into a chase scene in downtown Saigon, when an automobile would easily have sufficed. And I can’t think of many other films where a helicopter has met it’s demise with a piece of washing line.

You have to wonder what seasoned thesp Jonathan Pryce was thinking when he took this role. Perhaps he thought “It hasn’t done Dame Judi Dench any harm has it?”. But then she’s never been asked to wear a despot chic Nehru collar suit whilst trying to take over the world with a small, wireless keyboard.

Teri Hatcher was three months pregnant when she played Bond’s other love interest, Paris Carver. Are there no depths to which he will not stoop?

Review by: Jindy
Posted by Exploding Helicopter at 11:31