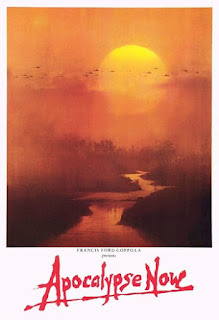 So goes the unofficial Army recruitment slogan, which tries to suggest the military is little more than a glorified holiday – albeit with a little light homicide thrown in.

In fact, there are striking parallels between serving in the Army and taking a package holiday. With both, your travel, accommodation and catering needs are all taken care of, and the citizens of the country you’re visiting are never keen to see you.

Sceptics might point out that most holidays don’t require you to risk potentially fatal violence. All I can say is: those sceptics clearly aren’t familiar with some of the ‘lads’ holiday I used to go on. 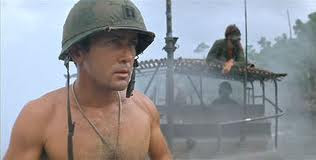 In many ways, it makes more sense to view Apocalypse Now in terms of a particularly indifferent package holiday. The plot sees Army officer Martin Sheen offered a mission (or mini-break holiday) by some slippery top brass types. They want him to make a hush-hush trip to Cambodia to quietly assassinate Marlon Brando – a top Green Beret Colonel who’s gone bonkers, disappeared into the jungle, and is now proving to be an embarrassment to the Pentagon.

Bored of his budget hotel room in Saigon, Sheen accepts the offer, especially as the trip to Cambodia involves a relaxing river cruise. Unfortunately, his travel companions prove to be either naïve or highly-strung, and Martin soon finds himself holed up in the boat’s cabin getting wasted on the mini-bar. (In this he mimics the majority of young English male tourists, who tend to return from a sunny fortnight even whiter and with a liver twice its original size.)

Knocking back straight whiskies, Sheen misses numerous opportunities for surfing, water-skiing and pedalo larks along the river. Maybe he just forgot his Speedos. 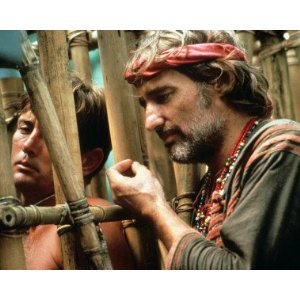 Still, he does get to enjoy some of the nightlife, including a strip-show and a rather vivid firework display which – featuring live ammunition - shows shockingly lax regard for health and safety legislation.

And you know that thing about places never looking quite as good as in the brochure..? It’s the same story when our Martin arrives at Brando’s Cambodian resort, and learns that the ‘light and airy room commanding stunning views’ he expected is actually a bamboo cage, in which he’s swiftly imprisoned.

And instead of those nice little potted palm plants you often find in sunny resorts, there’s an assortment of severed heads littering the camp. Er, when did you say the next boat back was? Still, at least he didn’t fly Ryanair.

And mercifully, Camp Cambodia is free of the ultimate holiday annoyance: Germans putting towels on sun loungers then going for an hours-long walk into town. But it does have Dennis Hopper, whose unhinged, manic jibbering suggest he’s had too much midday sun without the factor 30 on. Also lounging around is Scott Glen, who stares gauntly into the middle distance all day – presumably wondering why, even in a three-hour plus film, he doesn’t get a single line.

Eventually it’s time for Sheen to check-out and settle his bill, which in this case requires him to end Brando’s stay at the camp with some proverbial ‘extreme prejudice’. I only hope Big Marlon’s travel insurance covers him for the damage.

Anyway, all this is merely prologue, for earlier in the trip Sheen takes a connecting flight with Robert Duvall’s air cavalry helicopters. They arrive at a particularly lively beach resort where the locals seem none too pleased by the sudden appearance of the loutish holidaymakers, ghetto-blasters on full volume.

As one helicopter lands to evacuate some wounded tourists, an irate local runs up and throws a grenade-containing hat. The soldiers dive for cover and va-voom – one stationary chopper fireball. 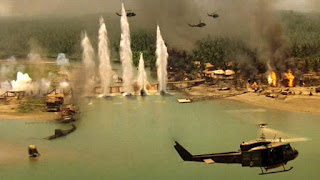 We get a lovely aerial view of the entire sequence, affording a birds-eye view of bystanders, realising the helicopter’s about to explode, scattering hither and thither. As the chopper is consumed with flame, the rotor blades continue to turn, which is always a nice touch.

Hard to tell. One body is blown clear by the explosion, and we also see a man covered in flames clamber out the wreckage. Whether they lived to write a postcard home is unknown.

As you’d expect, the Ride of the Valkyries-soundtracked chopper assault is a highlight for helicopter aficionados such as ourselves.

The whirlybird armada unleashes hell on a small village, blowing up bridges and huts with abandon. The whole scene is rendered in full Technicolor, pyrotechnic glory, due to Coppolla‘s no-expense spared staging.

Marlon Brando appears in a particularly indulgent cameo. I say appears, but it’s hard to be entirely sure since the much-lauded actor – embarrassed about his enormous girth – performed most of his scenes amidst virtually black-out shadow, with just tiny sections of his physiognomy visible at any one time. Even so, I can confidently state that the man has really fat ears. 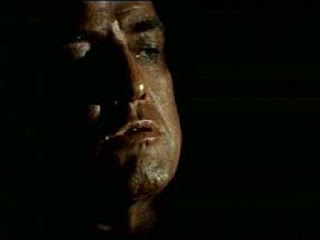 Throughout his career, Brando was notorious for not bothering to learn his lines, but it now seems he’d reached a point where he couldn’t be bothered to even appear in his own scenes.

You’d think such obvious contempt for your craft might leave an actor struggling to find paid employment. Not so in Hollywood, where producers responded by offering Brando ever larger sums of money to appear in ever shorter amounts of film. Where do I sign up?

“Never get out the boat.” 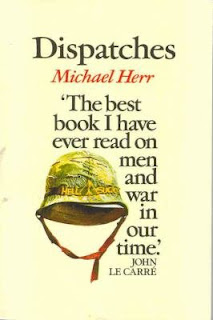 The wonderful narration which frames the film nearly didn’t happen, as Coppola abandoned the idea during filming. However, sound editor Walter Murch – convinced it was the only way to make the project work – assembled the film with a narration recorded by himself.

The final narration was written by Vietnam war journalist Michael Herr, author of the seminal account of the conflict, Dispatches.
While the narration is spoken by Martin Sheen, Herr’s distinctive hard-boiled, gonzoid, voice can be heard clearly in the words. If you love the ambience it lends to the film, then Dispatches is well worth seeking out and reading.

Also, the film is now arguably more famous for what occurred off camera than in front of it: Francis Ford Coppola’s monstrous bullying and on-set harem, fatty Brando refusing to step out the shadows even for his own scenes, Martin Sheen’s druggy nuttiness. The Seventies film book Easy Riders, Raging Bulls captures all the madness admirably and is worth a peek.

Posted by Exploding Helicopter at 18:02