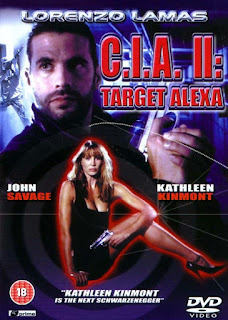 “This is the kind of film that separates the occasional bad movie people from the hardcore sadists,” concludes Matt at DTV Connoisseur in his review of this film.

So, when I sat down to watch CIA II: Target Alexa (1993) I knew I was embarking on a journey of personal discovery. An inner truth was about to be revealed to me. Was I ready? Could I deal with the consequences? There was only one way to find out.

Our hero for this film is Lorenzo Lamas. He has to retrieve the film‘s McGuffin – inevitably some new-fangled weapons technology – that’s been stolen by terrorists.
Confusingly, another group of terrorists then pinch the weapon thingy off the first lot. Seems there’s no honour amongst thieves – nor international terrorists for that matter.

To get the McGuffin back, Lamas courageously sends his old girlfriend (and former terrorist) Alexa to infiltrate the criminal gang, which works a treat until she’s rumbled.

Now Lamas is in double trouble, having to both recover the weapons-tech and rescue his former squeeze. Supposedly a top CIA operative, at this stage everything Lamas touches immediately goes tits up. He’s a like an action version of Frank Spencer. Some Terrorists Do Ave ‘Em.

Now, I’ve taken a few liberties with my summary of the action. That’s because further detail wouldn’t make any kind of sense outside the hermetically sealed bubble of logic in which the plot exists. Let’s just say this movie takes a running jump off the high board of ridiculous, bangs its head on the incredulous board on the way down then swan dives into a deep pool of dumbly enjoyable fun.

There are vintage moments aplenty, not least the cat-fight between Kathleen Kinmont and the imposing Lori Fetrick, who sees herself as the terrorist gang’s number one pin-up. The camp karate of their inevitable showdown – all breathy panting and more swinging nellies than a Dolly Parton convention – is worthy of any Russ Meyer film.

Alongside the delightful hand-to-hand combat, there’s more automatic gunfire than the National Rifle Association could shake a M16 at. If he was still alive, Charlton Heston would probably write in to complain.

With a body count approaching WW2 levels, the extras are entertainingly given free rein to die in the most artistic ways they can imagine – comically jerking around as bullets riddle their body, or needlessly throwing themselves over tables and through windows. Of course, the budget only ran to so many extras so, with such a huge body count, it’s very likely the viewer sees each individual extra pop their clogs about six or seven times throughout a variety of scenes.

Of course, this review wouldn’t exist if there weren’t some explosive rotary action to enjoy as well. The sequence is actually quite tasty, occurring when the second group of terrorists – led by John Ryan – initially seize the McGuffin.

Ryan leads the raid on his rivals’ camp in a couple of choppers, blowing up huts and vehicles with the destructive abandon of a small, delinquent child (or peacetime American general). Finally, the meatheads in the camp get themselves sufficiently organised to return fire. A quick burst of machine gunfire and KABOOM! Strike one helicopter.

One moment the helicopter’s there, the next it’s vaporised – going up quicker than a bride‘s nightie.
While there might not be much preamble, the fireball is mightily impressive, filling the screen with lovely, auburn orange hues.

Helicopter is shot, helicopter explodes. Industry standard. Like Ronseal, it does exactly what it says on the tin.

There’s a fantastic moment during the helicopter assault when John Ryan fist-pumps the air and goes: “Yeaaah!” after blowing up a tent.

In this moment he captures the very essence of the joy implicit in firing guns and blowing up stuff. Or at least, the simple joy of watching people in films do it.
Negatives

The opening scene is face-in-palm daft. Lorenzo Lamas arrives at the CIA’s weapons facility to test security, attempting to gain entry by telling the guard he wants to nip in and drop off his brother-in-law’s lunch.

If the idea of Lorenzo Lamas as some kind of sandwich chauffeur isn’t hard enough to credit, the scene also takes place in the middle of the night. I’ve heard of late lunches but this is ridiculous. Hey, Lorenzo: Worst. Excuse. Ever.

Compounding the idiocy, the guard shows not a flicker of suspicion until Lamas produces his genuine CIA identity card. Then the guard does get suspicious… You could spend a lunar month fruitlessly trying to find sense in this scene. Bonkers.

Review by: Jafo
Posted by Exploding Helicopter at 20:18